The reception that Representative Frank Kratovil Jr., a Democrat, received here one night last week as he faced a small group of constituents was far more pleasant than his encounters during a Congressional recess last summer. Then, he was hanged in effigy by protesters. This time, a round of applause was followed by a glass of chilled wine, a plate of crackers and crudités as he mingled with an invitation-only audience at the Point Breeze Credit Union, a vastly different scene than last year’s wide-open televised free-for-alls. The sentiment that fueled the rage during those Congressional forums is still alive in the electorate. But the opportunities for voters to openly express their displeasure, or angrily vent as video cameras roll, have been harder to come by in this election year.

In such an environment, when government is resolutely deaf and blind to the will of the people, what is to be done? In the words of journalist Barbara Ehrenreich, "dissent, rebellion, and all-around hell-raising remain the true duty of patriots." The question is: how does one go about raising hell and forcing politicians to listen?

This question is particularly relevant in our present political climate in light of the fact that our elected representatives have gone into hiding. Then again, if they actually made themselves available to their constituents, as they have done in previous years, they’d be sure to get an earful from disgruntled Americans who are growing increasingly unhappy about the state of the nation, the economy, and the fact that while the heartland suffers, it continues to be business as usual in Washington, DC.

This head-in-the-sand behavior is especially apparent among Democrats who, campaign promises to the contrary and despite control of the White House and both houses of Congress, have yet to live up to Barack Obama’s slogan of bringing about "change we can believe in." As the New York Times reports, "If the time-honored tradition of the political meeting is not quite dead, it seems to be teetering closer to extinction. Of the 255 Democrats who make up the majority in the House, only a handful held town-hall-style forums as legislators spent last week at home in their districts."

In fact, keen to avoid a repeat of last summer’s voter rage, Democrats have come up with a plan to keep things "civil": that is, avoid town-hall meetings at all cost, make minimal public appearances while at home in one’s district, only appear at events in controlled settings where they’re the only ones talking, and if one must interact with constituents, do so via telephone town meetings or impromptu visits to local businesses where the chances of being accosted by angry voters are greatly minimized. What this does, of course, is effectively do away with any pretense that we have a representative government — one that not only listens to the people but heeds their will. 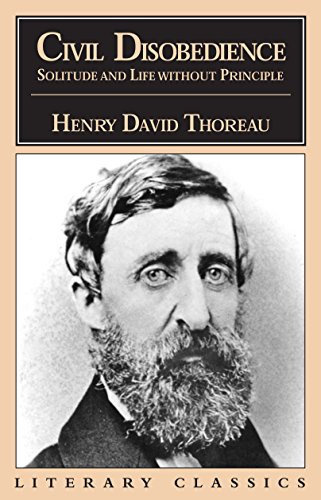 When all other methods have failed, there are really only three ways to deal with a government that doesn’t listen to the voters: one, you can be uncivil — showing up at a controlled event and shouting, heckling, and creating a disturbance and otherwise raising hell; two, you can engage in civil disobedience — staging sit-ins, refusing to pay taxes, etc.; or the final option, which is no real option at all and which we don’t want to see happen, outright violence.

We’ve already seen the first option, incivility, exercised more frequently, especially in the wake of last year’s heated town hall meetings over health care reform where outspoken Tea Party activists made headlines for heckling politicians and causing disruptions. Their "uncivil" behavior prompted a number of so-called free speech advocates to start propounding about the need for civility. Sometimes, however, the only way to speak truth to power is by being uncivil. In fact, it’s one of the few nonviolent ways left to get government officials to listen to "we the people."

Even former Obama supporters are starting to jump on the incivility bandwagon. For example, as Dana Milbank reports in the Washington Post, when House Speaker Nancy Pelosi appeared at a recent gathering of progressive activists organized by the Campaign for America’s Future, instead of the friendly greeting she expected, she was "eaten by her own." And: "Just three minutes into her speech — right after she gave the triumphant news that u2018Change is here!’ — two men stood up and spread out a large pink banner in front of the podium demanding u2018Stop Funding Israel Terror.’ At that moment," writes Milbank, "a wheelchair-bound woman named Carrie James began to scream from her table about 30 feet away: u2018I am not going to a nursing home!’ At that cue, about 15 people in the crowd — who, like James, wore orange T-shirts demanding u2018Community Choice Act Now’ — unfurled bedsheet banners and struck up a chant: u2018Our homes, not nursing homes!’"

Why the outrage? Robert Borosage, who organized the event, said, "Progressives have grown ever more dissatisfied, and for good reason. Our hopes or illusions were shattered: escalation in Afghanistan, retreat on Guantanamo, no movement on worker rights or comprehensive immigration reform, dithering on u2018don’t ask, don’t tell,’ reverses on choice, delay on climate change and new energy."

Clearly, civility is no longer the overriding concern. What’s at stake is representative government. What was supposed to be a two-way dialogue between government officials and the people has instead turned into a series of one-way monologues by double-talking politicians. Consequently, while many of us have been bickering over partisan politics — the Democratic-Republican distinction is really nothing more than an illusion — those in power have simply pursued their own personal agendas.

Thus, if the American people really want change they can believe in, they should start by putting politics aside and reclaiming their rightful place in the dialogue. This will only be achieved by confronting their representatives and demanding that they be heard. After all, these people work for us. We pay their salaries and underwrite their lavish lifestyles and perks. We should call the shots. So when they lie or cheat or don’t do their jobs in a timely or effective manner, we have a right — and a duty — to tell them so, whether they like how we do it or not.

End the Mandate Creating Money Out of Thin Air