The Making of Capricorn One

Fifteen years before The X-Files made government conspiracy a way of life, there was Capricorn One. Born from post-Watergate angst and television’s increasing technological versatility, the film remains an effective thriller and adventure story, tightly-written and tautly directed by Peter Hyams, wherein the idea of government secrets to be kept at any cost is even more viable today than it was in 1978.

In the story, Colonel Charles Brubaker (James Brolin), Lt. Col. Peter Willis (Sam Waterston) and Commander John Walker (O.J. Simpson) are set to be NASA’s best hope for sending a manned mission to Mars when, in the middle of the countdown, the three astronauts are removed from the capsule as the mission continues without them. They listen as they are transported to a remote desert base; they hear themselves from previous mission rehearsals give the pre-launch litany and hear as world news announces the launch of the world’s first manned mission to the red planet. Once ensconced in the secret base, NASA director James Kelloway (Hal Holbrook) explains the bizarre situation: it was discovered in run-throughs that the Capricorn life-support systems would have failed, killing the astronauts. Scrapping the mission is out of the question, as it would be the last nail in the coffin for NASA, as interest in and continued funding of the space program had begun to take a nose-dive. To save the program, Kelloway has been working with a secret team to fake the mission.

At first refusing to go along with the scheme, the astronauts are told that if they don’t, a bomb on the plane carrying their families will be set off. With no other way to turn, Brubaker, Willis and Walker go along with the ruse, but finally can’t take the increasing guilt of the lie they are helping to perpetrate. Their final decision is made for them when the Capricorn capsule malfunctions on its faked reentry as the world watches. As far as the rest of the planet knows, all aboard were killed. To keep the secret, Kelloway and his associates have no other alternative than to kill the astronauts. Brubaker, Willis and Walker escape in the jet that brought them, but run out of gas and have to go their separate ways in the desert as NASA-hired assassins follow, killing Willis and Walker while Brubaker continues on his trek to find a populated area.

Meanwhile, reporter Bob Caulfield (Elliot Gould) takes a tip from mission control technician Elliot Whitter, who says the transmissions that the astronauts are making back to Earth couldn’t possibly have come from deep space. When Whitter disappears and Caulfield is nearly framed for drug possession, the reporter discovers the plot and saves Brubaker with the help of a crop dusting pilot (Telly Savalas) to return the last living member of the Capricorn One crew to the public as Kelloway, Brubaker’s wife and all the networks look on.

The story developed years before, when Peter Hyams, then working at CBS’s Boston office, was helping to cover the Apollo moon shots. While working there, Hyams witnessed the NASA-constructed simulations to be aired on network news, showing the world what was happening with the craft in space as it flew to its destination. As Hyams watched, he began to notice just how real the simulations looked.

‘I grew up with parents who believed if it was in newspapers, it was true,’ says Hyams. ‘I was part of the generation that believed if it was on television, it was true. I remember while working at CBS one day, looking at the monitor and thinking, ‘Wait a minute! Everybody is looking at the simulation. Suppose you did a really good simulation?’ The NASA moon program was a story with only one camera. Normally, all big stories have tons and tons of cameras for thorough coverage. Not so with the moon shots. It all had to be done from the studio. That raised questions in my mind about how the story could be presented. The whole Watergate backlash kicked in. I once said that I owe my career to H.R. Haldemann.’ 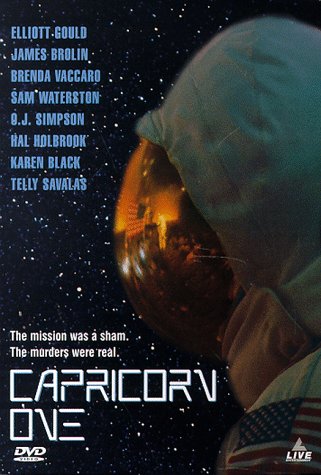 Due to the nature of his work at CBS, Hyams had accessibility to vast amounts of NASA research, such as mission books and command module schematics from which to draw inspiration. He began writing the script around 1974–1975, with plans of developing a feature film that he would direct himself. By that time, Hyams was established in television and feature films as a writer, director and producer on such projects as T.R. Baskin, Goodnight My Love and the police drama Busting, featuring future Capricorn One star Elliott Gould. But in the mid-1970s, he directed Fat Chance with Natalie Wood and Michael Caine, a movie considered so bad that it was barely released under the title Peepers, and nearly put Hyams out of business as a filmmaker of any kind. What saved him and his burgeoning project was friend Paul Lazarus, producer of Michael Crichton’s Westworld and its sequel, Futureworld.

‘As happens in California when you are a filmmaker and your movie is deemed unreleasable, you become ice cold,’ Lazarus says of Hyams’ state of being in 1977. ‘Peter said to me, ‘Gosh, I have a couple of scripts, but nobody will read them.’ I read them, two of which became films I ultimately made with Peter: Capricorn One and Hanover Street. Given where we were in Peter’s career, it was indeed true that nobody was interested in a Peter Hyams movie.’

But the wily producer was not about to be stopped by Hollywood’s brick wall. Lazarus turned to England when he had a tip that Sir Lew Grade, the British impresario whose ITC production company brought forth Space: 1999 and such features as Voyage of the Damned, March or Die, and The Cassandra Crossing, might be open for a new project. The agent who tipped Lazarus said that if he called the producer at 5:30 am London time, Grade would answer his own phone, since his secretary wouldn’t be in yet.

‘I made that call,’ says Lazarus, ‘and he seemed surprised to have someone he never heard of on the other end of the phone. I told him that I had a movie for him, and he said, ‘My plate is completely full. What’s the movie about?’his curiosity getting the better of him. I told him it was about a phony Mars shot in which the bad guys are NASA and the United States government. He took a beat and said, ‘Meet me in New York on Sunday and bring your filmmaker. Who is it again?’ I told him it was Peter Hyams, to which he said, ‘I’ve never heard of him.’ I had this wonderful sigh of relief’Lazarus laughs’that he wasn’t going to say, ‘Oh my God! He’s just had an unreleasable picture at Fox!”

The next day, Lazarus talked to Hyams, who then talked to his agents, who demanded that the only way the director should make the trip from California to New York is if Grade sent him a ticket. ‘I said to Peter, ‘Look, they’re just playing agent games because they haven’t been able to get you any work,’ Lazarus recalls. ‘The truth is Lord Grade is not known for his distinguished taste, but he is certainly not known as a welsher. If he says he is going to fly us to New York, do it! What the hell? You don’t have any other choice.’

‘We rang the bell at Grade’s hotel that Sunday morning at 9:00 am, and he opens the door, standing there in his silk bathrobe with the whitest legs I have ever seen in my life, and this enormous Churchill cigar in his mouth. He said, ‘Hello boys. You’re the people with the Mars shot?’ I said, ‘Yes.’ He said, ‘Wonderful. You have a deal. Thank you for coming in.’ We walked out, and Peter said, ‘What does that mean?’ I said, ‘I don’t have the foggiest idea! We’ve flown 3000 miles for a one-sentence meeting!”

What it turned out to mean was that Grade was going to option the story and wanted a rewrite, which was as contractually far as he would go at that moment. ‘I worked on the rewrite with Peter,’ says Lazarus. ‘We submitted it to Grade, who said, ‘Fine. Come to England to meet with me.’ We took separate planes because I was in California and Peter was in New York. His plane got delayed. I decided to go to the meeting anyway because you don’t keep studio heads waiting, and if it got too difficult there would always be Peter arriving on the next plane.

‘So, I went to see Grade,’ Lazarus continues, ‘and he said to me, ‘There’s too much crawling around in the desert.’ I said, ‘What?’ He said, ‘People don’t like to see crawling around in the desert.’ I said, ‘Lew, it’s a page of description. It’s less than 15 seconds of screen time.’ Then he said, ‘Oh, well, Ok. Then the script’s fine. We’ll make it.’ By the time Peter came in, I told him this story, and he said, ‘What does that mean?’ I said, ‘I don’t have the foggiest idea. My meetings for this project have taken a total of less than a minute!”

From that point, Lord Grade’s game was to pre-sell the picture to various foreign investors and television networks by creating a package of sellable stars. Previous to Capricorn One, all of Grade’s productions had been star-basedone popular actor to build a deal around but CO was an ensemble piece with eight main characters, which didn’t deter the producer at all. Lazarus felt that his role at this point in the project’s development was to convince Grade that he could sell the film with eight mid-level, recognizable names, rather than base the whole production on one huge star. O.J. Simpson was one of the first cast, not particularly because of his acting abilities, but because he was represented by the agent who had introduced Lazarus to Grade in the first place, and the agent wanted his client, a recognizable personality who had appeared in Grade’s The Cassandra Crossing, to be in the picture.

Thin Hair...You Could be Anaemic, Stressed or Just Hungry The Coming Economic Catastrophe