In their new book, Nullifying Tyranny: Creating Moral Communities in an Immoral Society, James and Walter Kennedy address the case for nullifying unconstitutional federal legislation to u201Cfellow Christians who . . . understand that the government . . . has been slowly taken over. . . by an anti-Christian secular humanist element . . .u201D It is, in essence, an attempt to wake Christians up to the fact that the u201Cgodu201D of democracy results in a situation where immoral people can force everyone to comply with their edicts. u201CGovernment, even when sanctified by a majority vote, cannot turn an otherwise immoral act into a moral act.u201D Amen.

Government under democracy is nothing more than legalized theft on a massive scale, the Kennedy brothers say in their Rothbardian analysis of the state. Whether it is monarchy or democracy, government steals private property (through taxation, mostly) u201Cin order to pay for the loyalty of . . . supporters those close to the source of power who have a natural interest in maintaining the status quo.u201D Moreover, u201CA loyal court, a loyal police and military, and a loyal religious establishmentu201D all u201Clead parasitic lives. The cost is paid by the productive who must labor to earn enough for the kingu201D (or the state in general, under democracy). 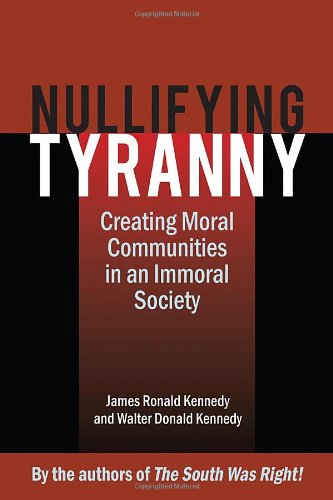 Many Christians misread Jesus’s command, u201CRender to Caesar the things that are Caesar’s, and to God the things that are Gods,u201D they write. What Jesus said was NOT to obey ALL of Caesar’s commands, but only to u201Crender unto Caesar things that belong to the realm of government, obey [only] legitimate laws enacted by government . . .u201D For u201Cthe larger the government the greater harm it will eventually do to society’s morals . . . . the only way to maintain a moral community is to keep the corrosive power of government at a minimum.u201D

The Kennedys embrace the Rothbardian principle of self-ownership as u201Cthe first principle of human liberty.u201D Liberty u201Cis based on the principle of self-ownership and personal accountability. Human liberty is indispensable for the promotion, development, and maintenance of a prosperous, peaceful and moral society.u201D The problem with democracy is that human liberty is anathema to it, for u201Cpoliticians, the ruling elite who control government, do not want people to become self-reliant.u201D They want us all to be reliant on them. They want us to be their tax slaves, cannon fodder, and experimental laboratory rats. u201C[C]ommunities composed of strong and self-reliant families pose a significant barrier to the envy and greed of politicians and those closely connected to the political ruling elite. Politicians know that people who rely upon themselves and their local community have very little need for a powerful political leader, government bureaucrats, and legions of regulators . . .u201D

Nullifying Tyranny lays out the classic case for limited constitutional government: u201CThe primary function of government indeed the only legitimate function for government is to protect citizens’ property rights.u201D The authors note that in the 1840s, John C. Calhoun identified the tipping point of where, in a democracy, the u201Ctax consumersu201D come to outnumber the taxpayers. At that point, u201Cgovernment becomes the instrument for legalized looting of the dwindling, law-abiding, moral, productive element.u201D We become ACORN Nation, in other words. Moreover, government is inherently a criminal enterprise, for u201Cgovernment agents have the ability to do things to citizens that, were the agents not part of the government, they would be seized by the local law enforcement service and thrown into jail.u201D

Unlike almost all conservatives and libertarians who make the case for limited constitutional government, the Kennedy brothers are not so naïve as to believe that the document could ever be self-enforcing. u201CTime has demonstrated the folly of this argument,u201D they write. They are Jeffersonians, and believe as Jefferson did that the only way such a document could ever conceivably be enforced is through political communities organized at the state and local level. Like past generations of Jeffersonians, they understand the absurdity of believing that the federal government could ever be trusted, through its u201Csupremeu201D court, to faithfully enforce the constitutional limitations on its own powers. Nullification and secession or the threat of secession are the only possible means of enforcing a written constitution.

Addressing the Lincoln Cult and other champions of centralized federal power, the authors write that u201CSlavery and racial segregation are no longer enforceable by law . . . . Anyone today who attempts to deride States’ Rights due to its historical association with slavery or racial segregation should be dismissed as one seeking Federal supremacy in order to force his will upon u2018we the people’ of the sovereign community . . .u201D (emphasis added).

The Kennedy brothers echo F.A. Hayek’s dictum from The Road to Serfdom that, under socialism, u201Cthe worst rise to the top.u201D This is also true in democracies in general, they say. In a democracy, u201CSuccessful leaders . . . tend to be those who are not hindered by strong moral principles.u201D That is because in a democracy, successful political candidates must do three immoral things: u201Cpromise to take money away from those who honestly earned it . . . and give it to those who have no legal right to itu201D; u201Cmake promises that most likely will not be keptu201D; and grant financial favors to individuals and groups who merely provide the financing for the winning campaign. u201COnly an unprincipled person can successfully piece together majority votes in a legislature made up of numerous conflicting special interest groups.u201D

The final chapter of Nullifying Tyranny makes a case for local citizen activism that can resurrect states’ rights as a means of implementing nullification. Most importantly, the chapter answers six major objections to their proposal to amend the Constitution to resurrect state sovereignty. (In nutshell form, these are: u201CWe’ll never get three fourths of the states to agreeu201D; u201CCan’t we just rely on good, honest people to get elected?u201D; u201Cthe special interests are too powerfulu201D; u201CChristians should not mix politics and religionu201D; u201CCan’t we just elect u2018good conservatives’ to Congress?u201D; and u201CYour proposal would weaken the federal government; who then would protect us?u201D

The book ends with four addendums, including a commentary on u201CBoom-Bust Economicsu201D that is based on Murray Rothbard’s What Has Government Done to Our Money? And Tom Woods’ Meltdown: A Free-Market Look at Why the Stock Market Collapsed, the Economy Tanked, and Government Bailouts Will Make Things Worse. Christians who believe that all that needs to be done is to elect good, Bible-believing Republicans are deluding themselves, say the Kennedy brothers, for u201Cthe Republican Party is just as wedded to the status quo as the Democratic Partyu201D and u201Cboth parties can be counted on to do whatever it takes to maintain the ruling elite’s control and parasitic use of Federal power.u201D