If there is one overriding message you can take from reading The Golden Rule: Safe Strategies of Sage Investors, a book I put together, it is this: As an investor or a saver, it is critical for you to realize that "who" you rely on for advice to purchase gold is as important as your decision to own gold. But why own gold in the first place? I could name a dozen reasons but the main one is because gold is money. Especially now, with Wall Street morally bankrupt and actively colluding with the federal government, you have to think of gold as wealth insurance that will protect you from the economic catastrophe resulting from this "merger."

The book contains contributions from 24 leading experts on gold including insights from Congressman Ron Paul, investment newsletter publishing phenomena Bill Bonner, and NY Times best-selling authors Peter Schiff, Doug Casey, and Addison Wiggin. There are also contributions from less well-known individuals, all of whom are involved with gold at some level and who are every bit as honest and conscientious as their more famous peers. 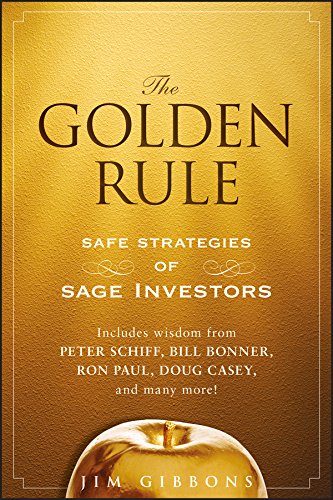 "I have been around the u2018hard money camp' for almost 30 years, and know almost all of the writers in this book, often for decades" says John Mauldin, President of Millennium Wave Investors whose weekly newsletter is read by over 1,500,000 readers. "I have learned from them, and now you can reap the accumulated wisdom of many years of these masters of the gold markets." In fact, all of the contributors to the book were selected by me because I believe them to be persons of character. What do I mean by character?

Wall Street is supposed to be stuffed with hundreds of thousands of brokers, financial planners, and analysts who exhibit excellences of thought. I think some individual brokers and investment advisors may have sincerely believed the DJIA was on its way to 40,000, that housing prices would never fall, and that gold is a barbaric relic whose usefulness has passed. But that wasn't sound thinking that was cheerleading.

As the current economic crisis shows, critical thinking has either been lost or was never on Wall Street to begin with. Wall Street and the federal government want you to believe that no one could have foreseen the latest economic downturn. Even if you give Wall Street the benefit of doubt and make the assumption that it is a bastion of sound and rational thinking, how can you explain that ninety-nine percent of them missed calling this latest recession?

I think a far, far bigger problem is that they lack moral virtue or moral excellence. At least institutionally. Maybe as individuals in a personal setting, away from their Wall Street jobs, they are all trustworthy folks. But the Wall Street game is like a crooked casino and all those brokers and analysts are working for the house. If they were being honest with themselves and were true people of integrity, they would quit their jobs. Let's face it, Wall Street as an institution is morally bankrupt.

There were a few individuals who not only saw this economic crisis coming, but who also sounded the alarm every chance they had, and more importantly, are now sounding the alarm even more loudly than before. Those few individuals include every contributor in my book, all of whom are on record in one form or another in not only calling attention to the imbalances in an over-leveraged economy but advocating the purchase of gold as wealth insurance. According to renowned contrarian investor Marc Faber, publisher of the widely read Gloom, Doom and Boom Report, "The Golden Rule contains serious analysis and arguments why every saver should hold some of his or her cash and assets in physical gold and gold related investments." Every contributor recognized the role gold played in the economy and the world at large, so it wasn't like every analyst and advisor was blindsided.

There are also a few brokers and analysts who are not complicit in the fraud called Wall Street. For instance, when I was a stockbroker I never claimed to be one of the most knowledgeable and experienced brokers in the United States dealing with small-capitalized gold-mining stocks, whose professional contacts are second to none, and who could be trusted completely. But I do describe my broker that way. I don't claim to be one of best gold-mining stock analysts in the world, but I know several who are and their contributions are included in the book.

I'm also familiar with several innovative ways to physically own gold, and several of the sage individuals introduced in The Golden Rule discuss perfectly legal and safe strategies to own gold outside your home country if that's what you desire. Additionally, my experience and knowledge regarding buying gold bullion and gold coins as well as numismatic coins is relatively new while several of the sage individuals to whom I refer you to have decades of experience in these areas. It's not just their experience that sets all these individuals apart, it's the fact that they can be trusted to offer the best advice possible – for you.

“If there’s one thing American investors need to know more about, it is gold," says Charles Goyette, author of the NY Times best seller, The Dollar Meltdown. "They can either learn about it now – ahead of the curve – or later from the school of hard-knocks.  Jim Gibbons thinks now is better and has done a great job gathering some of the industry’s most knowledgeable experts together in one highly informative, full-spectrum package.”

I'd like to think that the contributors to The Golden Rule personify what it means to have good character. And there is some symmetry in that because gold is all about character. For thousands of years gold has been sound money. Money you can trust.