In Defense of Sedition

Time magazine’s Joe Klein recently appeared on a Sunday news show where he accused Glenn Beck and Sarah Palin of "sedition" because of their criticisms of the Obama administration’s expenditure of trillions of dollars of corporate welfare in the form of bailouts; its Soviet-style nationalization of automobile, banking, student loan, and mortgage industries; its historically wild spending and borrowing binge; its forcing of socialized medicine down our throats in the face of overwhelming public opposition; and its plans to tax American capitalism into bankruptcy. Anyone who criticizes such things should be thrown into the Gulag, says Klein. Another talking head on the same television show as Klein screeched that Rush Limbaugh should also be indicted for "sedition" for the crime of criticizing King Obama.

Sedition, Joe Klein informed us (reading off of a napkin), is a threat to "the authority of the state." But the key question is: authority to do what? Does the American state have unlimited "authority" to do everything and anything the Marxist in the White House, the former senator from ACORN, can dream up? If they can nationalize automobile companies, banks, and the healthcare industry, do they also have the "authority" to nationalize the grocery industry, home building, steel manufacturing, and everything else? Joe Klein obviously believes so. In so doing, he supports the "authority" of a totalitarian state. Opposing totalitarian government is "sedition" according to Joe Klein and his fellow network "news" show talking heads.

The original design of the American government was that the only "authority" the central government was to have was powers delegated to it by the free, independent, and sovereign states in Article 1, Section 8 of the Constitution. All others are the responsibility of the people, respectively, and the states, according to the Tenth Amendment, which Thomas Jefferson considered to be the cornerstone of the document. These powers were delegated to the central government for the benefit of the sovereign states, who appointed the central government as their agent — mostly for issues regarding war and foreign policy — by adopting the Constitution. That’s why treason is defined by the U.S. Constitution in Article 3, Section 3, as follows: "Treason against the United States, shall consist only in waging War against them, or adhering to their Enemies, and giving them Aid and Comfort . . ." As in all the founding documents, "United States" is in the plural, signifying that the free and independent states were united in delegating certain enumerated powers for their own mutual benefit. Thus, "waging War against them" means the states. Waging war against the free and independent states is what constitutes treason under the U.S. Constitution. That’s why Lincoln’s invasion of the Southern states was the very definition of Treason.

As I wrote in The Real Lincoln, the one unequivocal good that came of Lincoln’s war was the abolition of slavery. But the worst thing that came of it — the thing that was the real purpose of the war — was the centralization of virtually all political power in Washington, D.C., and the essential death of the Jeffersonian system of states’ rights or federalism that was the essence of the pre-war Constitution. After 1865, the federal government became the sole decision maker with regard to the limits of its own powers. It exercised this decision-making power through the federal judiciary and, as the Jeffersonians had always warned, it eventually declared that there were, in fact, no limits to its powers.

It didn’t take long for the federal government to declare the idea of natural rights, the bedrock of the Jeffersonian philosophy of government, to be null and void. It did this by adopting the income tax in 1913, along with the creation of the vast legalized counterfeiting scheme known as the Federal Reserve. The income tax effectively declares that all earned income is the property of the state, and that the state will inform us from time to time how much of our own income we may keep to live on by setting the income tax rates. The Fed and the income tax made it possible for the government to finance a limitless explosion of statism just four years later with American entry into the wordwide disaster of World War I, which led to the most destructively bloody century in all of human history.

The income tax and the Fed finally centralized all political power in Washington, as it became trivially easy for the central state to conscript millions of men for its wars, spend mind-boggling sums on things like a welfare state and the nationalization of education that have no constitutional authority whatsoever, and to easily bribe any state government that voices the least bit of dissent by threatening to withdraw federal grants to the state. More than half of the American population is bribed and manipulated in a similar manner today as recipients of myriad federal subsidies.

By the 1930s the central state was sick and tired of what it considered to be contemptible constitutional arguments that limited the size and scope of government. FDR condemned the Constitution as the irrelevant scribblings of a lost generation, and advocated massive socialistic government intervention whereby the government would magically "guarantee" everyone a high-paying job, high food prices for farmers, a "decent home," all the medical care you could want, freedom from fear of old age, sickness, and accidents, and of course, state-funded education. This was the essence of FDR’s childish wish list of an "economic bill of rights." Of course, government cannot promise anyone anything without also confiscating the income of someone else to pay for it. Nor can it "guarantee" any of FDR’s pie-in-the-sky wish list unless the laws of economics are repealed, which of course they can never be.

Since states’ rights had been obliterated by Lincoln’s war, there was no longer any effective opposition to totalitarian-minded political hacks like FDR. He appointed enough Supreme Court judges to create a situation that, by 1937, the Court was prepared to reverse generations of prior decisions that attempted to enforce the Constitutional constraints on government. And they succeeded: According to Andrew Napolitano, author of The Constitution in Exile, not a single federal law was ruled unconstitutional between 1937 and 1995. The legal scholar Bernard Siegan made the same point in Economic Liberties and the Constitution. For more than seventy years, Americans have lived under a judicial dictatorship that rubber-stamps all expansions of federal power, no matter how at odds they may be with the Constitution itself. The body of "constitutional law" that has developed during this time is nothing more than a bundle of tongue-twisting legalese designed to subvert and destroy any lasting vestiges of constitutional limitations on the powers of the central state.

In short, the government in Washington, D.C. has not been a government by consent since 1865. In response to the declaration by American citizens residing in the Southern states in 1860—61 that they no longer consented to being governed by Washington, D.C., the U.S. government waged war on the entire civilian population of the South, killing some 350,000 fellow American citizens, which is more Americans than died in all other wars combined. This number includes at least 50,000 civilians. On top of that, Southern cities and towns were burned to the ground, bombed, and plundered. The plundering continued for a decade after the war during the laughingly named "reconstruction" period. 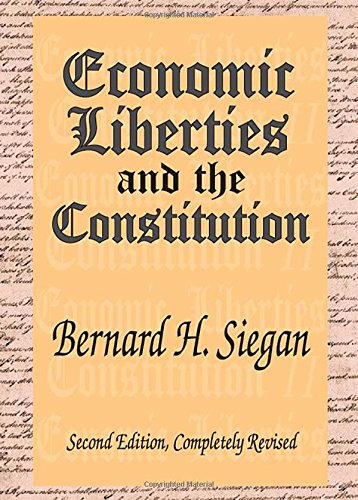 Americans — especially conservatives — delude themselves when they express the view that it might be possible to restore constitutional government. How would this happen? Who would enforce the Constitution? Why would the federal government ever give up its monopoly of constitutional interpretation and return to the pre-1865 world where all three branches of government were often given equal weight in constitutional interpretation, as well as the citizens of the free, independent and sovereign states? The central state murdered hundreds of thousands of its own citizens in order to achieve this monopoly status, and it will never just give it up.

It is the Washington establishment, which includes its media lapdogs like Joe Klein, that is guilty of sedition. The legitimate "authority" of the state is spelled out in the U.S. Constitution. It is the Washington establishment that has abandoned that legitimate authority and granted to itself essentially unlimited powers. Therefore, there can be nothing more patriotic and "American" than opposing everything the central state proposes doing that would expand its scope and powers in any way. Without any kind of constitutional constraints or meaningful citizen control, the federal government is nothing more than another criminal gang, as Murray Rothbard often said. The fact that it is a very large gang does not make it any more legitimate. The TEA Party protesters and all others who oppose the oppression of the central state should ignore the puerile rantings of the Joe Kleins of the world and remind themselves of what Thomas Jefferson wrote in the Declaration of Independence when he said that men

are endowed by their Creator with certain unalienable Rights, that among these are Life, Liberty and the pursuit of Happiness. — That to secure these rights, Governments are instituted among Men, deriving their just powers from the consent of the governed, — That whenever any Form of Government becomes destructive of these ends, it is the Right of the People to alter or to abolish it, and to institute new Government . . . (emphasis added).

"TEA Party" activists claim that they are Taxed Enough Already. That’s not good enough. If they took their own rhetoric about constitutional government seriously, they would recognize that what is needed is at least a 90 percent reduction in federal taxes, not merely being satisfied with being taxed "enough already."

Since such a tax reduction is not likely to be achieved with the cooperation of the Washington establishment, no matter who is elected president, the only real prospect for success is to take seriously the words of Thomas Jefferson, author of America’s Declaration of Secession from the British Empire, and organize numerous peaceful secession movements. Let them have their ACORN/Democratic Socialists of America-inspired, socialist utopia on the Potomac. The rest of us can watch with great amusement as they ruin their small society, impoverish themselves, and turn it into a Third-World swamp, which is what Washington, D.C. started out as several hundred years ago.