It is hard to summarize Tim Weiner’s Legacy of Ashes because there really isn’t anything that can be cut from it. Every page is packed with stories of incredible sacrifice at low levels and incredible malfeasance at the highest level (low-level people thinking of sacrificing yourselves, take note).

There’s the story of how the CIA stole 5% of the Marshall Plan relief money, stories of how it funded "moderate" socialist political parties and media all over the "free" world, stories of vast expenditure on covert programs with little result. And of course the story of Dusty Foggo, executive director of the CIA under Bush. His story is unusual in that he was actually convicted for corruption, unlike most of the questionable characters that have hidden behind CIA secrecy.

All these stories should be common knowledge, but aren’t; most of us know more about James Bond than Dusty Foggo. They add up to a series of valuable historical lessons which could save us from future possibly civilization-wrecking disasters. I suppose we could summarize the lessons as "giving a quarter trillion dollars with no oversight to implausibly inept bureaucrats with names like Dusty Foggo and calling it an intelligence agency isn’t a very good idea," but let’s break it down:

The first lesson is that the CIA has never been able to spy on America’s potential enemies. The CIA was caught completely by surprise by every major development: the Soviet A-bomb, the Soviet H-bomb, the Korean War, the arrival of missiles in Cuba… right up to Saddam’s invasion of Kuwait, which the CIA absolutely denied would happen even as it was underway. A few years later the CIA turned around and stated that absolutely for sure, Saddam had WMDs. Dick Cheney was presumably lying about the WMDs… Weiner is pretty sure the CIA just didn’t know.

Every security threat has escaped the CIA’s notice until they read about it in the newspaper or the military’s satellites photographed it. The CIA was unable to spy on Mao, Kim Il Sung, Stalin, Brezhnev, even Saddam Hussein. If any of those guys (I mean, among the ones that actually had WMDs) had really been plotting a nuclear Pearl Harbor, the US would be a radioactive ruin.

The Agency’s record on economic intelligence is similar. The CIA was still reporting that the USSR’s economy was growing at a whopping 6% per year, even as that sickly economy collapsed in real life and the Berlin Wall fell. According to the CIA figures (which Weiner says they obtained by just taking the Soviet Five-Year Plan propaganda releases and tweaking them), apparently the USSR had solved the problem of calculation in a Socialist economy. Why the CIA didn’t simply reveal that magic formula to the world and end the necessity for the difficulties of accounting and entrepreneurship was never asked.

The CIA’s nearly total blindness has two causes: one, they have never had much in the way of spies. During most of the Cold War the CIA had no important human intelligence behind the Iron Curtain at all. Second, the CIA has often been penetrated by foreign intelligence services (the Aldrich Ames case being the norm more than an outlier; the NSA was formed when CIA signals intelligence was compromised right before the Korean War by a single Soviet spy named Weisband). 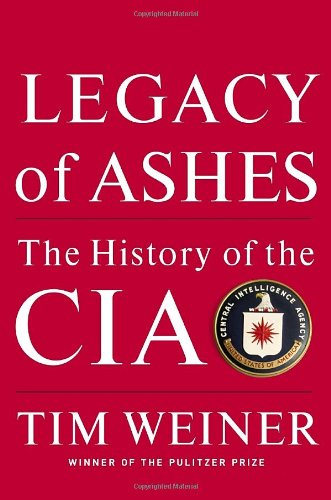 Even when the CIA thought it had valuable agents or signals intelligence, the KGB knew what the CIA knew and fed it what they wanted it to know. A typical story was a cable-tapping operation in Berlin; the CIA at vast expense dug a tunnel to a cable line and tapped it, sucking in vast amounts of data. The Russians’ spies knew about the operation from the beginning, and simply allowed the CIA to think that it had the upper hand. But the agency was just as blind as ever… worse than blind, because for a while it thought it had 20-20 vision.

The second lesson is that the CIA does no better when it comes to covert operations. The CIA has served as a great shield to the dictatorships of the world, by recruiting people who wanted to oppose tyranny and turning them over to the respective secret police agencies. Thousands of anti-communist Chinese, Koreans, Russians, Tibetans, Germans, Hungarians, Cubans etc. etc. were parachuted to certain death by the CIA, year after year and decade after decade. And decade after decade the CIA covered up its failures from the American people, and kept the money flowing.

The few covert operation "successes" the CIA boasts were not about overthrowing totalitarian regimes. The CIA did "succeed" in installing dictators in Greece, Guatemala, Iran, and other places where CIA money was sufficient to buy enough thugs. Of course when these regimes finally fall, as in Iran, they leave the people who lived under them permanently embittered against the US.

The CIA also used to boast about their "success" in arming and funding Islamic fundamentalist terrorist groups to fight a little war in Afghanistan. This has seemed less successful an idea since certain recent events.

3. The CIA Is Secret Only From The US Taxpayer

The third lesson is that secrecy is counterproductive to real security. Of course the world is a dangerous place, and we need defenses. But the CIA has never been an effective part of America’s defenses. The military detests the CIA for its refusal to turn over what little intelligence it has during wartime. CIA ineptitude and coverups have left US Presidents unknowingly blind during crises, thinking that they knew what was going on when they didn’t.

The CIA creates enemies in places where we had none, while it gives our real enemies more ability to spy on us (and on their own dissidents) than they would have without it. It has always been a black hole for money… secret budgets breed Dusty Foggos like spilling cornflakes behind the kitchen counter breeds roaches. And worst of all, the CIA is the most directly evil part of Aid To Dependent Dictators; directly helping torture and kill people who oppose their own tyrannical governments.

The bottom line is that government secrecy is the enemy of freedom, not its protector. The opposite of foreign totalitarianism is not domestic totalitarianism, it is transparency. The US is still by far the most powerful nation on Earth; we need fear no open enemy. And all we have to do to get rid of most of the secret enemies is to quit paying for them ourselves.