The Abrahamic Legacy: The Jewish Ideal of Freedom

At first glance it may sound a bit peculiar to assert the strong ties between Judaism and libertarianism. After all, it is hard in the modern world to distinguish and disassociate Judaism from modern day Zionism, though the two to a large extent could not be more ideationally apart. To set the record straight Judaism is not modern day Zionism. While modern day Zionism wishes to advance certain political and social goals via the deification of the state, Judaism simply wishes to observe the world and understand its nature and mechanics. Judaism is a science and philosophy more than it is a religion or movement. It is from here, from the honest understanding of the world which Jewish philosophy seeks, that Judaism meets and grabs tightly to ideals paralleling libertarianism.

So how does Judaism as a philosophy respond to government intervention and the ideal of freedom? Well perhaps we should begin a bit historically. Rabbi Joseph Soloveitchik in his work " The Emergence of Ethical Man," describes Abraham as anarchic. The divine imperative to Abraham of "leave from your land" (Genesis 12:1), according to Rabbi Soloveitchik, was meant as a removal from a conforming society, society that adores institution for the sake of adoring institutions. The real ethical and charismatic man according to Judaism is the freethinking, unimpressed, non-coerced individual. Abraham left structured society to become a nomad and what he left in secure asylum he gained in free and meaningful inquiry. It could not be stated any better than how Rabbi Soloveitchik himself says it, "The charismatic personality is a political and social anarchist…he is not an ethical conformist who just subjects himself to an external authority, which over powers and enslaves him" (Emergence of Ethical Man pg. 156). 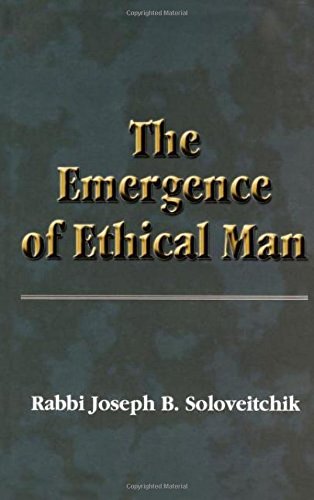 In a similar vein, the 15th-century bible commentator Rabbi Ovadiah Sforno equates the idea of being "created in the image of God" to being an existence who acts based upon his own consciousness and understanding. Logically speaking this would be to the exclusion of internal or external coercion. It is no accident that authentic Judaism takes a staunch line of thinking towards the autonomy of self, as its very idea of a relationship with God is firmly based upon it. As opposed to a transcendental view of the Man/God relationship Judaism takes a wholly organic approach. In the eyes of Judaism the comprehension of reality and the interacting with it constitutes the very relationship to God itself. Through understanding and observing the world man gains a glimpse into the mind of God, so to speak, and that this itself is the relationship man has to God generally speaking. However, should man demean himself and choose to become sheltered from reality by allowing and even demanding the government to interact with reality in his place, then such a relationship to God is simply impossible. Freedom in Judaic theological terms is synonymous with a relationship to God. Maimonides in his 13 principles of faith (which are unanimously agreed with by the Jewish philosophers of old) considers it heresy to have an intermediary between an individual and God (Introduction to the Commentary on the Mishna, Tractate Sanhedrin). Man was given a mind to be able to relate to reality and subsequently to God, and an intermediary is a denial of a) that God relates to man directly, and b) that man is a rational/intellectual being who is free to relate to God on his own.

In fact Judaism not only considers autonomy as vital to create a relationship with God, but even in creating a relationship to oneself, as Jewish philosophy holds that man as a free-willed being is a partner is his very own creation. That it is up to each person to choose how to live the proper life and to decide about how to go about achieving this. Thus each life is an individual and unique life and all equally share in a right to life, as Judaism takes a staunchly qualitative view of humanity. Similarly, the view on property rights in Jewish philosophy emerges from the very idea that man is not a creature that withers away but is meant to sustain his very existence. A right to property is equivalent to the right to sustain ones own existence. Physicality in Judaism is a means of sustaining the metaphysical "I." Rabbi Sampson Rafael Hirsh in his work Horeb comments. "Just as God gave a body to the human spirit as a tool for his human activities, and the body must be respected for the spirit within it; so He gave him the earth with all that is on it and belongs to it so that he may freely acquire it and dispose of it according to his destiny" (pg. 226). Life and property are synonymous in Judaism and the theft of property is therefore tantamount to murderous tendencies "just as it is God's command that you shalt not kill…so to is it God's command that you shall not steal…." (pg. 227).

Considering then that Jewish philosophy views man as an autonomous creator of his own self, the statist ideal has no place in Jewish life. In fact if you look to the very dialogue between God and Samuel over the request by the Jews for a king, this very point is illuminated by God himself. In Samuel I 8:5 the Jews demand to have a king "like the other nations." Samuel is troubled by the request and turns to God in prayer. God replies to the request in verse 7–8 telling Samuel, "Listen to the voice of the people…it is me whom they have rejected from reigning over them…from the day I brought them out of Egypt until this day they forsook me and worshiped the Gods of others." The wish to be subjected to the rule of man and to deify the state as an ethical authority, by God's very words is idolatrous. It is only God in the eyes of Judaism who is an authority over reality. Any move to subjugate oneself to an artificial power (in this case an unethical government), to remove oneself from the natural order of reality that God has created, is itself idol worship from the perspective of Jewish ideology.

From an authentic Jewish perspective the role of a Jewish king is to protect the land from idol worship. When the people asked for a king "like the other nations" they were disposing of the idea of a philosophic king with a specific moral imperative, and were instead wishing to gain security from the empowerment and deification of the state (hence God's response). In regards to the bible's command to establish a king in Deuteronomy 17:14, Rabbi Hirsh specifically points out that this was to only take place once the people were established in the land, as the role of the Jewish king is not to provide for military might "…the Jewish king is not for conquering the land and not for safeguarding its possessions, altogether not for developing forces to be used externally" (Rabbi Sampson Rafael Hirsh Commentary on the Pentateuch). It's a peculiar thing that Judaism unlike any system that comes to mind, not only lays question to the legitimacy of the king as a concept, but also imposes strict laws upon him (as the King is not the essential authority, God is, hence you will notice there is always a prophet floating around the story lines). In fact in Talmud Tractate Sanhedrin there is a relatively unresolved dispute as to whether or not the powers that Samuel warns the king will abuse in that, "he will take away your sons…he will take your daughters…he will confiscate your best fields etc." (Samuel I 8:11–17) are actually legal for the king to act on or not. That is, there is a major view in Talmudic discourse that is of the opinion that the king is not allowed to infringe on private property and freedom in the slightest (outside of idol worship, this question itself is a separate, yet fascinating study). Though there are Jewish scholars who would give these powers to the king (e.g., Maimonides), it is clear that ALL authorities agree that if the king were to do so he is corrupt; it is simply a legal question of whether or not he has the authority per se to do so. Further, the king even legally is limited in his military might and taxation powers, as he is prohibited from having an excess of horses for war and money taken from the people (see Deuteronomy 17:16–17). Though the great leader of Spanish Jewry in the 15th century, the Abarbanel is of the opinion that monarchy as a concept is wholly wrong and that republican forms of government are much more prosperous.

In all honesty it must be taken into account that the Jewish people at the time of Samuel were extremely independent. Before a king had been established there was really very minimal central power. The major central forces were the Sanhedrin, a supreme court of sorts (though infinitely less moronic than any American court ever) who resolved disputes in the understanding of Jewish law and the "Judges" who were agents of the Sanhedrin dispersed to each tribe (more notable ones include Samson, Jephthah, Deborah etc.). It should be noted that unlike the American justice system, the Jewish court's task was to seek any way to find you INNOCENT. In fact a court that put more than 2 people to death in 70 years was considered murderous (perhaps Attorney General Holder should be made aware of this viewpoint). To even convict a person there had to be a specific warning to the defendant by two witnesses that the act he was about to partake of was illegal. The defendant would then have to willfully ignore the warning from the two witnesses. If a person was to proceed with the act anyway and ended up standing before the court, no circumstantial evidence would be allowed, only eyewitness testimony by the witnesses (who are interrogated separately) is taken into consideration. Oh, and it should be noted if the witnesses were found to be lying…they would get the penalty of whatever the person who stood accused would have gotten should he had been found guilty…big disincentive to lie. For the most part the governance of the people was local and tribal, each tribe making use of its specific lands and strong tribal identity (see Jacob's blessing Genesis 49:3–28), there was no one centralized, powerful leader for many years. This idea takes Jeffersonian federalism to a whole new level. Simply put Judaism is entirely not interested in, nor promotes a political power grab.

Concretely, Judaism is a natural, holistic system. Underlying it all is the fundamental recognition of the natural order of the world. Man in Judaism is on a life-long journey to fully develop an awareness of the natural order and system that God has created. He is on a search to better understand his place and limits in the natural harmony. To the Jewish ideal ethical man is the man who understands the context of his existence and abhors the idea of over extending his role and place onto the outside world and to other people around him. The Jewish ethical man seeks to keep nature in its original form, who will not at any cost distort the manner in which the world and man are meant to function. He seeks no artificial guidance from the wisdom of self proclaimed omniscient fools, his only direction comes from the observance of the world around him and the wisdom of God that it contains.

May this time of Passover remind us of the eventual fall of tyrants and the freedom that the ethical imperative brings.