The Pro-Life Assault on Ron Paul and the Constitution

The right-to-life movement is a failure. Although millions of dollars have been spent on lobbying, marches, and protests since the 1973 Roe v. Wade decision, millions of women have still had abortions since then. There is no doubt that many abortions have been prevented, but even a round number of how many is almost impossible to estimate. The pro-life movement has failed miserably to persuade women to not have abortions, to educate women on the evils of abortion, to prevent unwanted pregnancies, to convince doctors to not perform abortions, to effectively counsel women with unwanted pregnancies, to impede promiscuity, and to provide sufficient alternatives to pregnant women considering abortion. Pro-lifers are quick to lay the blame on the Supreme Court, activist federal judges, Planned Parenthood, the ACLU, feminists, doctors who perform abortions, the Democratic Party, and liberals — anywhere and anyone but themselves and the women who actually have abortions. According to most pro-lifers, the solution to the abortion problem is not persuasion, education, or counseling; it is more centralization of power in the federal government — the same government that, in a vast power grab that did violence to the Constitution, asserted federal supremacy over the states’ abortion laws in the Roe v. Wade decision. In a strange turn of events, instead of some libertarians thinking Ron Paul is wrong on abortion, some in the right-to-life movement have recently questioned the pro-life credentials of the strongly pro-life member of Congress, obstetrician, and former presidential candidate. Dr. Paul, who has delivered over 4,000 babies, counseled young women against having abortions, written two books against abortion (Abortion and Liberty and Challenge to Liberty: Coming to Grips with the Abortion Issue), and stated that “in 40 years of medical practice, I never once considered performing an abortion, nor did I ever find abortion necessary to save the life of a pregnant woman,” has said about abortion and the right to life: I believe beyond a doubt that a fetus is a human life deserving of legal protection, and that the right to life is the foundation of any moral society. Reaffirming the importance of the sanctity of life is crucial for the continuation of a civilized society. There is already strong evidence that we are indeed on the slippery slope toward euthanasia and human experimentation. Abortion on demand is no doubt the most serious sociopolitical problem of our age. The lack of respect for life that permits abortion significantly contributes to our violent culture and our careless attitude toward liberty. 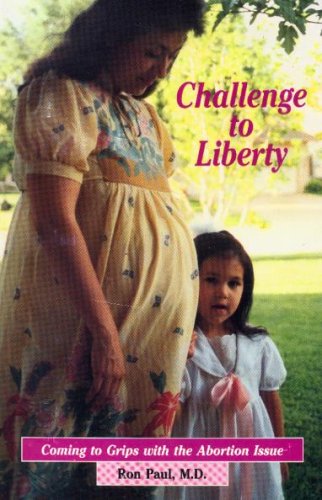 But not only has Dr. Paul claimed to be pro-life and made some negative statements about abortion, he has, as a member of Congress, actually tried to do something about abortion within the bounds of the Constitution he took an oath to uphold: The right of an innocent, unborn child to life is at the heart of the American ideals of liberty. My professional and legislative record demonstrates my strong commitment to this pro-life principle. In Congress, I have authored legislation that seeks to define life as beginning at conception, H.R. 1094. I am also the prime sponsor of H.R. 300, which would negate the effect of Roe v. Wade by removing the ability of federal courts to interfere with state legislation to protect life. This is a practical, direct approach to ending federal court tyranny which threatens our constitutional republic and has caused the deaths of 45 million of the unborn. I have also authored H.R. 1095, which prevents federal funds to be used for so-called “population control.” Many talk about being pro-life. I have taken and will continue to advocate direct action to restore protection for the unborn. None of Dr. Paul’s statements against abortion or actions to reduce abortion is good enough for some pro-lifers. One of the newest pro-life organizations, American Right To Life, has launched a vicious attack on Dr. Paul because he opposes both a federal law proscribing abortion and a constitutional amendment banning abortion.

As he himself explains his position: Roe v. Wade was wrongly decided, but not because the Supreme Court presumed to legalize abortion rather than ban it. Roe was wrongly decided because abortion simply is not a constitutional issue. There is not a word in the text of that document, nor in any of its amendments, that conceivably addresses abortion. There is no serious argument based on the text of the Constitution itself that a federal “right to abortion” exists. The federalization of abortion law is based not on constitutional principles, but rather on a social and political construct created out of thin air by the Roe court. Under the 9th and 10th amendments, all authority over matters not specifically addressed in the Constitution remains with state legislatures. Therefore the federal government has no authority whatsoever to involve itself in the abortion issue. So while Roe v. Wade is invalid, a federal law banning abortion across all 50 states would be equally invalid. The notion that an all-powerful, centralized state should provide monolithic solutions to the ethical dilemmas of our times is not only misguided, but also contrary to our Constitution. Remember, federalism was established to allow decentralized, local decision-making by states. Today, however, we seek a federal solution for every perceived societal ill, ignoring constitutional limits on federal power. The result is a federal state that increasingly makes all-or-nothing decisions that alienate large segments of the population. For this Dr. Paul is said to be “pro-choice” and lumped in with pseudo-pro-lifers like John McCain, Sarah Palin, and George W. Bush. Additionally, whoever created Dr. Paul’s “pro-life profile” shows a profound ignorance of libertarianism, the Constitution, and the federal government.

Dr. Paul’s first step in eradicating the plague of abortion from America is a simple one: remove the jurisdiction of the federal courts and the Supreme Court, as the Constitution allows in Article III. This would take only a simple majority vote of both houses of Congress. The self-proclaimed pro-lifers in Congress had their best chance to do this just a few years ago and blew it. Most Republicans in Congress claim to be pro-life; some Democrats in Congress claim to be pro-life. Between the two parties enough votes could have been obtained to restrict the jurisdiction of the Supreme Court when the Republicans controlled the White House and both Houses of Congress — the period from January 20, 2001, to June 5, 2001, and again from January 3, 2003, to January 2, 2007. After jurisdiction over abortion is returned to the states, pro-lifers can then begin a state-by-state campaign to criminalize abortion. Not only is this strategy much more practical, they would be much more successful in their efforts this way. Authority over criminal law is constitutionally retained by the states. Unfortunately, however, Congress has federalized a host of ordinary street crimes already covered by state criminal codes. The federal criminal code has over 4,000 separate federal offenses relating to actual crimes like arson and carjacking and spurious crimes like moving birds across state lines to engage in fights and interstate transport of unlicensed dentures. These federal laws should all be repealed. More federal criminal laws and more centralization of power in the federal government are the last things we need. It’s not a question of “looking the other way while innocents are killed” or “passing the buck on the abortion question”; it is a question of the Constitution, the judicial system, federal power, the role of the federal government, our federal system of government, and the nature of our republic. Pro-lifers foolishly make the mistake of elevating the issue of abortion above all others. A candidate for office who claims to be pro-life can get a pass on just about anything else. Yet, someone can be pro-life and statist to the core, as many pro-lifers no doubt are. If Obama had a change of heart and began supporting the pro-life cause, he would still be a radical leftist unworthy of anyone’s vote or support. I submit to you that I would rather have someone in elective office who was indifferent to the abortion issue, yet was a strict constitutionalist and advocate of liberty and limited government, than the typical pro-life, red-state fascist. To some pro-lifers it is not only the Constitution be damned, but national sovereignty be damned. In the American Right to Life smear of Ron Paul we read this incredible statement: God gives no country, no state, no county, no city, nor any subdivision of government permission to authorize or even to tolerate the intentional killing of the innocent. The federal and state relationship is irrelevant to the “legalization” of abortion. If a neighboring country legalized the killing of Christians, Jews, children, or any class of person not convicted of a capital crime, it thereby commits an act of war that would justify invasion. In the bizarro world of the American Right to Life, since they believe a person exists from the moment of conception, and since they consider a child in the womb just as much a person as Alan Keyes, the U. S. government would be justified in launching a worldwide crusade against abortion and invading every country that has legalized abortion — regardless of the legality of abortion in the United States. Since the chance of the federal government or a significant number of state governments criminalizing abortion is a big, fat zero, only an appeal to religion or morality can truly stop abortion, not electing a Republican majority in Congress, not electing a Republican president so he can appoint more pro-life justices to the Supreme Court, not the federal judicial system, not amending the Constitution, not lobbying, not protests, not marches, and not by centralizing more power in Washington DC. As Dr. Paul has well said: A pro-life culture can be built only from the ground up, person by person. For too long we have viewed the battle as purely political, but no political victory can change a degraded culture. A pro-life culture must arise from each of us as individuals, not by the edict of an amoral federal government. Ron Paul is the most principled and consistent pro-life member of Congress. Shame on American Right to Life for its assault on Ron Paul and the Constitution.

Literary Libertarian The CIA in Afghanistan