The Saintly Spirit of Father Christmas

Nothing captures the commercialisation of Christmas quite as effectively as the history of Santa Claus. To illustrate the point, look at a wonderful 16th-century painting that hangs in Room 7 of the National Gallery in London. Most people who pass by it are unaware of its significance. But this panel, circa 1555-60, preserves a particularly pure element of the Christmas spirit.

The painting, attributed to the Tuscan mannerist Girolamo Macchietti, depicts the most important legend of St Nicholas of Myra.

To the right, a nobleman slumbers, surrounded by his three daughters, who are also asleep. According to tradition, the family was so poor that the father was on the brink of selling his girls into prostitution. To the left, their saviour appears at the window, dressed in a sumptuous orange tunic adorned with a red robe. Under the cover of darkness, he prepares to lob through the aperture the second of three balls of gold (each represents a purse stuffed with money) that will provide dowries for all of the daughters, so that they won’t have to sell their bodies to survive. 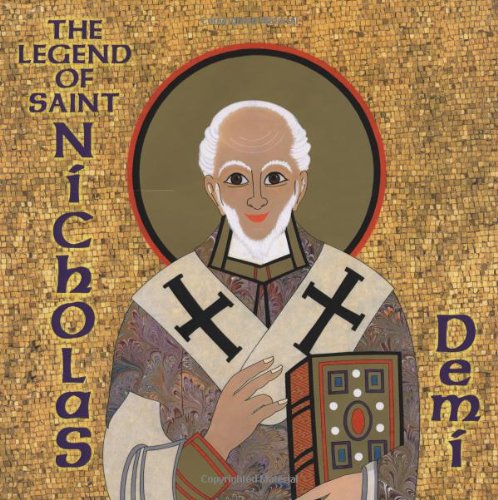 For Macchietti’s contemporaries, this youth would have been instantly recognisable as St Nicholas. But, today, he goes by a much more familiar name: Father Christmas.

This may come as a surprise. How can Macchietti’s Mr Goldenballs, with his gilt sandals and curly, glowing hair, be related to roly-poly, red-faced Santa Claus? For starters, he’s too thin. And beardless. He is dressed like an inhabitant of the Mediterranean, not Lapland. He is standing by the window, not peering down the chimney. And, anyway, where’s his retinue of reindeer?

But, then, this is one of the sad truths at the heart of Christmas present. These days, it isn’t only the birth of Christ that is threatened with oblivion. The charitable St Nicholas, associated with Christmas since time immemorial, is rapidly sliding towards anonymity, too. Meanwhile, the stock of his more recent incarnation as Santa Claus, the darling of department-store managers, filmmakers and advertising copy-writers the world over, continues to rise.

Canon James Rosenthal, who has earned a reputation as one of the Church’s leading authorities on St Nicholas, believes it’s time that the "real" Father Christmas is remembered.

"I always think it’s sad that people are ignorant of the origins of our customs," he says. "Santa Claus is fine, but St Nicholas is so much better. Like us, he is real.

"I believe there is a bit of St Nicholas in all of us. For Christians, he is a model to push chubby Santa back into fairyland."

St Nicholas’s standing is currently so low that Canon Rosenthal was recently banned from visiting children held at an immigration centre in Bedfordshire. When he arrived at Yarl’s Wood, dressed as St Nicholas, wearing a magnificent fake white beard and a bishop’s mitre, he had hoped to deliver presents donated by the congregations of several London churches. But he was turned away by security guards, who eventually called the police. "I felt like a criminal for trying to spread cheer and a few gifts," Canon Rosenthal told me this week.