Whenever I hold my two-year old grandson, Grant, in my arms I wonder what this world will look like six decades from now, when he is my age. I know that if we "stay the course" it will be ugly. The current economic meltdown is a harbinger.

Panama’s chief of government, Omar Torrijos, foresaw this meltdown and understood its implications back in 1978, when I was an economic hit man (EHM). He and I were standing on the deck of a sailing yacht docked at Contadora Island, a safe haven where U.S. politicians and corporate executives enjoyed sex and drugs away from the prying eyes of the international press. Omar told me that he was not about to be corrupted by me. He said that his goal was to set his people free from "Yankee shackles," to make sure his country controlled the canal, and to help Latin America liberate itself from the very thing I represented and he referred to as "predatory capitalism." 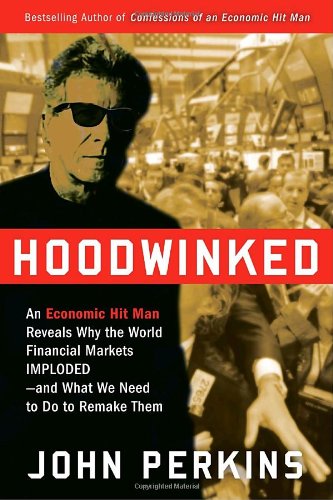 "You know," he added, "what I’m suggesting will ultimately benefit your children too." He explained that the system I was promoting where a few exploited the many was doomed. "The same as the old Spanish Empire – it will implode." He took a drag off his Cuban cigar and exhaled the smoke slowly, like a man blowing a kiss. "Unless you and I and all our friends fight the predatory capitalists," he warned, "the global economy will go into shock." He glanced across the water and then back at me. "No permitas que te engañen," he said ("Don’t allow yourself to be hoodwinked.")

Three decades later, Omar is dead, likely assassinated because he refused to succumb to our attempts to bring him around, but his words ring true. For that reason I chose one of them as the title of my latest book, Hoodwinked.

We have been hoodwinked into believing that a mutant form of capitalism espoused by Milton Friedman and promoted by President Reagan and every president since – one that has resulted in a world where less than 5% of us (in the United States) consume more than 25% of the resources and nearly half the rest live in poverty – is acceptable.

In fact, it is an abject failure. The only way China, India, Africa and Latin America can adopt this model is if they find five more planets just like ours, except without people.

The Best of John Perkins

Ron Paul: The Fed Will Self Destruct When It Destroys the Dollar The Fort Hood Sniper Attack