"Everyone is ignorant, just in different subjects." ~ Will Rogers

"Bo Knows" was a wildly successful ad campaign for Nike cross-training shoes that ran in 1989 and 1990, starring football and baseball sensation Bo Jackson, the only athlete to ever make the All-Star team in two major sports. Wikipedia describes the first ad:

Perhaps the "Bo Knows" campaign should be updated to reflect modern day politics:

The spot opens with a shot of Barack Obama teaching a class of 3rd graders.

The next scene shows the president in front of a sea of windmills.

Obama flying an Apache helicopter over the mountains of Afghanistan…

The president in surgical mask and gloves performing an operation…

The president receiving the Nobel Prize in Economics…

The president taking a sworn oath to the Constitution…

How can anyone take seriously a president who delivers over 100 speeches during his first seven months in office? The attention to detail and out-of-the-box thinking are truly impressive. The all-knowing president can seamlessly switch from encouraging students to wash their hands during flu season to suggesting doctors share test results by e-mail. The man would have us believe he can rescue a collapsing financial system, make the country self-sufficient in energy, repair centuries-old Middle East animosities, fix classrooms, regulate boardrooms, modernize emergency rooms, raise two children, run faster than a speeding bullet, and jump tall buildings in a single bound.

Setting aside the morality of one man planning the lives of 300 million (more if you include his significant foreign policy aspirations), the futility of it all should be obvious. The central planner always runs into this irritating economic brick wall called "scarcity." As individuals, we all have to deal with this — limitations in our talents, resources, time, energy, and ambition. So we constantly make tradeoffs, based on our own unique preferences and the supply of possibilities. "Should we have cheeseburgers or filet mignon for dinner tonight?" "Should we take the kids to Disneyworld or Niagara Falls?" "Should we tell Johnny to skip plans for college, go up to our eyeballs in debt, or pull the plug on Grandma?" How can the planner know enough to make such decisions for a single person, much less take into account the hopelessly complex interactions of billions?

This plight of the world improver is reminiscent of the movie Bruce Almighty in which Bruce, played by Jim Carrey, gets to play God for a week on the condition he does not interfere with free will. Exhausted by trying to answer millions of prayers by e-mail, he relents by hitting the "reply all" button and granting everyone their wish. Instead of solving the world’s problems, there are consequences, such as a preponderance of lottery winners in his hometown of Buffalo, and all hell breaks loose.

Friedrich Hayek referred to the social engineer’s fatal conceit as "the pretence of knowledge:"

Unlike the position that exists in the physical sciences, in economics and other disciplines that deal with essentially complex phenomena, the aspects of the events to be accounted for about which we can get quantitative data are necessarily limited and may not include the important ones. While in the physical sciences it is generally assumed, probably with good reason, that any important factor which determines the observed events will itself be directly observable and measurable, in the study of such complex phenomena as the market, which depend on the actions of many individuals, all the circumstances which will determine the outcome of a process… will hardly ever be fully known or measurable.

In other words, economic knowledge is highly decentralized and mostly off limits to the planner. But how is this knowledge organized and harnessed? Wouldn’t chaos ensue if individuals were left to their own devices?

In a world of scarcity, people must give up something to get what they want. This necessarily leads to trade with others. Trade creates two challenges. First, if you need bread and only have shoes to offer, you could waste a great deal of time locating a baker who needs shoes. Second, how can you possibly make sense of a system where prices have no common denominator (e.g., one pair of shoes = 8 loaves of bread, 1 loaf of bread = 1 dozen eggs, etc.)? The market provides a solution, out of necessity and without central direction: It naturally and spontaneously adopts one commodity as money, or a medium of exchange. 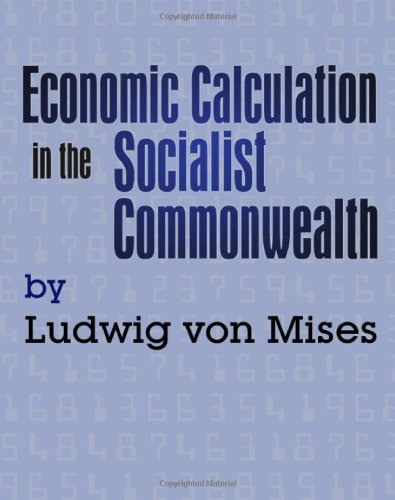 Let’s say your dream is to own a house on a lake. If there were no scarcity there would be no problem — we’d all own lake houses. Instead, that house has a price based on the supply of similar homes and vacation alternatives (like taking a cruise) and the demand for various leisure activities. You have a plethora of ways to occupy your free time, and the only way to compare the cost of these (what you have to give up in terms of accumulated property and your labor) is with prices. Without a price system there would be no way to allocate resources efficiently, no way to perform economic calculation, no way to plan. Our lives would be chaotic and primitive.

By contrast, the central planner cannot possibly know how prices would be set in a free and constantly changing market. He is essentially ignorant and flying blind, as Ludwig von Mises famously revealed in his 1920 essay, Economic Calculation in the Socialist Commonwealth:

In the socialist commonwealth every economic change becomes an undertaking whose success can be neither appraised in advance nor later retrospectively determined. There is only groping in the dark. Socialism is the abolition of rational economy.

Barack Obama may know how to give a speech or win an election, but he doesn’t know economics. Neither did practically every president from William McKinley to George W. Bush. Neither do most of the mainstream media, political pundits, and voting population who expect their government to make a silk purse out of a sow’s ear. As Murray Rothbard wrote, "It is no crime to be ignorant of economics, which is, after all, a specialized discipline and one that most people consider to be a ‘dismal science.’ But it is totally irresponsible to have a loud and vociferous opinion on economic subjects while remaining in this state of ignorance."

Nullification: The States Have a 'Nuclear Option,' Too A Mother's Resistance