Former Governor Lutrin was hard to find. Having served out his single term after shepherding Idaho from the corrupt and tyrannical claws of the rulers in DC and their agents throughout the land, he had quietly retired to his ranch near Sandpoint, ID in the northern panhandle in Year One of the Free State Alliance (FSA). The Alliance had expanded to embrace the former states of Idaho, Montana, Wyoming, Eastern Washington, Nevada and British Columbia joined two years later by Saskatchewan, Alberta, the Northwest Territories and the Yukon. The Alaskan Republic maintained very close ties with the FSA. Utah had gone her own way and established a Mormon theocracy. The West Coast states formed Pacifica but the Green Coalition which maintained tight control on the economy caused a brain-drain and economic collapse that splintered the coalition.

Since the break-up of these united States, all of California south of San Francisco had become part of the pan-Mexican rump state in Atzlan along with most of the American Southwest. Mexico has splintered into approximately ten separate states with alliances between the various 31 states that comprised Mexico ebbing and flowing on a daily basis. The decriminalization of drug laws in Pacifica and the Free State Alliance significantly weakened the strength of the Mexican drug cartels to finance their activities and the pan-Mexican economy started to flourish after nearly a century of economic and monetary penury.

Pacifica remained in force in the major cities like Portland and Seattle but had lost total control of the countryside in what had formerly been Washington and Oregon. The Dakotas finally allied with the Midwestern Alliance. 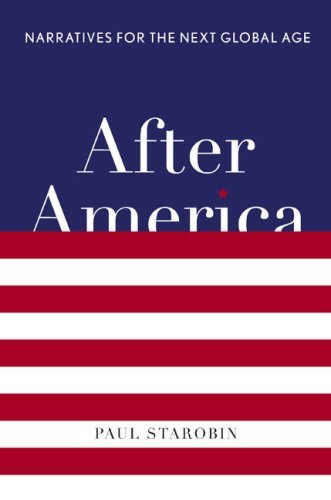 The American South had settled into an uneasy alliance with the United States Socialist Republic (USSR) which maintained their capital in the District of Columbia. Maine, Vermont and New Hampshire eventually broke away from the USSR to establish a system of Swiss-style cantons which the USSR battered for the first two years but eventually exhausted their ability to fight once the USSR economy collapsed into a miserable shambles that made Cuba look like 1990s Hong Kong.

Premiere Obama conceded defeat in an indirect fashion after assumption of his lifelong appointment at the circus-like Constitutional Convention in the USSR in 2012. The massive government intervention and adoption of total central planning had predictable results: the world’s first 100% marginal tax rate on the top fifty percent of earners had only surprised the Premiere’s Economic Council but no one else with the results. Tax receipts were down by 80% in the first year and disappeared in the second. Paul Krugman, the chairman of the council, was quoted as saying "[that] greed would be eliminated and a new man would emerge from the bold experiment." The only thing that emerged were the tens of miles of refugees attempting to flee the USSR in the first year after which the borders were sealed and all the government’s guns were trained inward to prevent the citizens from escaping the latest economic nostrum — permanent employment in a government job assigned to you whether you liked it or not.

It is difficult to gauge how bad conditions are in the USSR. Like the Soviet Union during the twentieth century and Cuba afterwards, rumors were rampant. Gulags, reeducation camps, mass disappearances, famine and disease outbreaks were apparently the order of the day. Some of the crueler pundits referred to the Premiere as Kim Jong Obama and Barak Mugabe. Like the former northern part of the Koreas, it remains a rather strong military power but an economic basket case.

Fears of meddling on the part of China, Russia and Middle Eastern states proved to be unfounded as those nations grapple with their own economic and social collapse difficulties. While all manner of economic nonsense like Keynes and Marx were the "wave of the future" in the twentieth century, the twenty-first century is seeing a veritable renaissance in the works of Hayek, von Mises, Rothbard and Bastiat.

"It is almost as if the entire human race has finally awakened from the fever dream of the government supremacists who have inoculated them against freedom for five millennia and opened their eyes to the new possibilities" Mr. Lutrin insists as we gaze out over the huge forested valley outside his home near Sandpoint. He is fit and tanned and still participates in what some would term adrenal sports. He remains a devout Senior Instructor on the Appleseed Trail for the Revolutionary War Veterans Association teaching weekend marksmanship clinics throughout the FSA when he is not globetrotting. We are comfortably seated in a veranda near his workshop. Since retirement he has found lucrative work as a consultant around the world "deprogramming and devolving state industries into private hands" with his new venture firm, The Spooner Group. Asked if he misses being the governor of a state, he merely smirks and claims he would rather work for a living.

"Mr. Lutrin (he insists he not be referred to as governor), five years have passed since the first crisis which set the nation asunder and broke up the most powerful nation on the globe. On reflection, would you have done anything different?"

"No, my only regret is that I was left with a task that should have been done ten or a hundred years before me. I was asked recently who my favorite President was during the twentieth century and the only one I could come up with was Coolidge and possibly Harding. No one else even came close. The rest of the rascals were simply well-dressed pirates. Barry, a close economist friend of mine, claimed there was no such thing as governments, only interests…there is plenty of truth to that."

"Hold on, I am not the author of the naked aggression and sheer lunacy that emanated from the Federal government for most of its history after the War Between the States in the 1860s. What happened five years ago was inevitability and just so happened to occur on my watch. I take umbrage at your comparison because you are quite literally insisting that if a man sees a serial killer discharging his duties, I have an obligation to cower instead of cowboy up and stop it. Look, I come from five generations of Westerners who not only earned their living the hard way but tended to be resentful of any authority outside of the family. You could almost surmise that my Celtic blood gave me a predisposition to anti-authoritarianism. There are lines in the sand…"

"So you are justifying the civil war which broke out across the country?"

"I am an old-school libertarian, not a pacifist. I believe in the non-aggression axiom. No man has the right to start a fight but the aggrieved party damn sure has the right to put a stop to any visited upon him. You see, that may be one of the worst pathogens or memes the political class and its apologists has convinced people to believe — that they are utterly incapable of helping themselves unless they surrender their rights to a violent elite. John Wayne said it best if I recall: u2018I won’t be wronged, I won’t be insulted, and I won’t be laid a hand on. I don’t do these things to other people and I expect the same from them.’"

"That is rather simple…"

"I would like you to consider something. Imagine a society in which everyone took that to be the way proper folks behave. But think that there may be people who would ask themselves how they could take advantage of that. I am not talking about the entrepreneur or small business owner, I’m talking about the natural cross-section of humanity in which you have a certain group of folks for whom criminality and even psychopathy is simply the way they are wired or nurtured. Now some of those men would ask themselves how can I minimize risk and maximize gain? Here’s a pop quiz: what is the only group of criminals who have consistently evaded responsibility for their misbehavior, garnered tremendous rewards in money and prestige and, excepting rare instances like Nicolae Ceausescu, die abed fat and happy?

"Politicians. Throughout history with rare exceptions, they have been the decadent and greedy agents of death and destruction on humanity. 262 million corpses outside of warfare alone in the twentieth century stacked up as a paean to the Cult of the Politician. Hundreds of millions of humans hoodwinked into thinking that if only they would remit their fates to enlightened strangers, all the roads would be paved with gold and manna from heaven would provide succor for eternity. I think you would have to be a sociopath in the first place to want to rule over others."

"But you were a politician. You were the governor of a state. Isn’t that rather hypocritical?"

"To a certain extent you are right. I compromised with the system and thought the only way to change it would be to wreck it from the inside. I did not enter office with the intention of secession and starting the whole ball of wax. Frankly, once I was in office, I could almost feel the sickness creeping over me. The feeling that maybe I could make a positive difference by punishing my fellow citizens to influence their behavior or using carrots and sticks on them as if they lab rats, as if I had the right to do so in the first place. Shame on me.

I had a constituent come to me one day and he and I had coffee together. Old and weather-beaten rancher who had seen the hard side of seventy years who put salt in his coffee. He was quite articulate and related a story to me. He asked me if I had ever had a difficult family member: alcohol or drug abuse, mentally retarded or a Down’s syndrome child. We both agreed we had. He made a very simple point: he said he would move heaven and earth to help his blood kin but even then a solution may not be available. In the end, no cure for Down’s or the son is not willing to give up his drink. No solution. Yet the politician’s siren song is that a group of disinterested strangers in a far-off castle will cure all these ills if the rancher would simply surrender a sizable portion of his wealth at gunpoint and be sanctioned by tens of thousands of laws he would have to obey on pain of death ultimately. Yet in the end, the politicians always make you worse off."

"Look, we may be entering a new age here hundreds of years before I envisioned it possible. Men and women all over the globe may be waking up to the simple observation that empowering others to engage in violence or the threat of violence over their family and neighbors may be a distinctly unhealthy way to live."

Beware of 'Medical Imaging' It's Over-Prescribed, Very Expensive and Dangerous to Your Health Central Bankers, or Central Criminals?