“In a fundamental shift, consumers are saving rather than spending,” notes the Los Angeles Times.

During the bubble years, more and more credit produced less and less real prosperity. It was as if you were borrowing more and more, to invest in your business or merely to increase your standard of living, but your income didn’t rise fast enough to keep up with the interest payments.

In 2005, Americans saved nothing. Not even aluminum foil or string. Now, the savings rate is approaching 5% of disposable income — a big turnaround.

We know from logic and experience that saving money — not spending it — is the key to getting wealthier. Saving money gives you capital. And it’s capital accumulation — in the form of factories, roads, ships, buildings, machines…and raw savings — that gives people the ability to produce more. It may take a man with a shovel a whole day to dig a decent grave. Give him capital — in the form of a backhoe — and he can bury everyone in town. That’s why capitalism works. It rewards the fellow who saves his money.

Yet every yahoo economist in the year of our Lord 2009 takes news of rising savings rates like the death of Michael Jackson. If households don’t consume, they reason, how can a consumer economy grow?

The problem is that you can’t really grow an economy by borrowing and spending.

Recent history proves it. Despite the biggest splurge of borrowing and spending in history, the US consumer economy barely grew at all.

“In the five years to December 2007,” reports Grant’s Interest Rate Observer, “America’s credit market debt climbed by nearly 57%, to $18 trillion. However, in the same half-decade, nominal GDP was up by only $3.3 trillion.”

For every five dollars people borrowed, they only increased their incomes by $1. Imagine that the borrowing had an average effective interest rate of 10% (credit card debt can be much more expensive). At that rate half of the additional income earned between 2002 and 2007 had to be used just to pay the interest.

Thank you for supporting LRC with your online orders

This was not the kind of growth that was likely to last. In fact, it didn’t. The whole thing came crashing down in ’07 and ’08. And now, the consumer has had a cup of coffee. He’s looked at himself in the mirror. He’s sorted through his pile of bills. And he’s made up his mind: that’s enough of that!

“The ratio of cash held by households as compared with assets has been rising sharply,” says James Saft in the New York Times.

“Companies, households and banks all want to pay down debt and…prefer to hold cash rather than assets, partly because the outlook for those assets is poor and partly because after a decade of excess, everyone now looks a bit over-extended.

“This is exactly what happened in Japan during its lost decade, when a balance sheet recession, one characterized by the paying down of debt and liquidations of assets, was self-reinforcing and very difficult to stem.”

And now this from David Rosenberg:

“The ultimate question is where all this cash is going to be deployed, and we believe it will ultimately be diverted toward debt repayment.”

Let’s see. We can figure this out from the numbers above. American consumers must have added about $7 trillion in extra debt during the Bubble Epoque, 2002—2007. Now, instead of buying things, they use their money to pay it down. The average household has about $43,000 worth of income. Let’s keep the math simple by saying there are 100 million households in the United States…and that they save 5% of their income. And let’s say they use every penny of savings to pay down debt. Hey…it will only take about 30 years to pay it off! Get ready for a long, long slump. 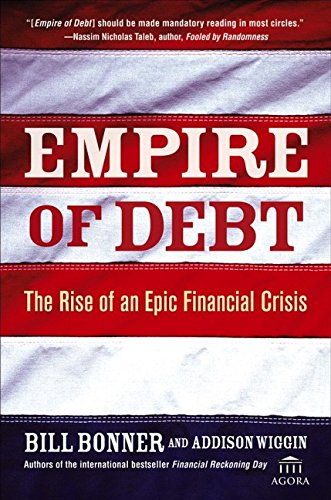 The reason for the dollar’s decline and gold’s rise was given in the front-page headline of yesterday’s Financial Times. China launched a “new dig” at the dollar, it says. As near as we could tell, China merely stated the obvious — that the world is going to have to find a better monetary system. The US dollar won’t be king of the hill forever. And China, which is up to its neck in dollars, would like to find a solution sooner rather than later — that is, before the dollar goes the way of all paper.

The dollar will eventually give way to inflation and devaluation, but probably not soon.

But it is not inflation that worries us…it’s the lack of it. Making a long story short, as long as the feds see no inflation they will continue trying to create it. In the end, they will get more than they wanted.

Though, right now, instead of inflation, we have deflation. Yesterday’s New York Times tells us that deflation in Ireland has reached 5.4% — the highest since the Great Depression of the ’30s.

You know the reasons for deflation as well as we do. The world suddenly has too many people who borrowed too much money to buy too many things they really didn’t need and really couldn’t afford. This caused the world’s producers to greatly over-estimate the u201Crealu201D demand. Their customers began to disappear in 2007. Their factories are still standing.

“Is it always so cold in July?” asked an American visitor yesterday. London has been cold, windy and rainy for the last week. It comes as a shock to American tourists, who inevitably show up in shorts and t-shirts.

Europe has a milder climate than North America. Our guest comes from Ottawa, Canada.

“Everybody thinks it is so cold in Canada. But it’s much hotter there than it is here. A lot of houses in Ottawa have air conditioning. Here, almost no one has it. And I guess they don’t need it.”

But in the winter, the streets of North American cities turn bitter cold and bums freeze up on the sidewalks. That doesn’t happen in Europe. It rarely gets cold enough to freeze a bum here. Maybe that’s why there are so many of them.

The daughter appears to be in her 20s or early 30s. She is a pretty girl, as near as we can tell. The mother must be in her 50s…maybe 60s. The two look very similar — like the mother/daughter combinations you see in skin cream advertisements. They dress the same. They have the same very English faces. They have the same expressions and same postures…sitting on the sidewalk with the backs to the wall. Whenever we pass, they are chatting with each other — happily, it appears.

The Only Solution to Our Economic Woes Fortunes Made, Fortunes Lost The Great Shift of '09