Theodore Dalrymple is a British Doctor who is also a gifted writer. He has written extensively on his experiences in medical practice in some of the world’s worst places: the third world, the British prison system, and the slums of London. He is critical of socialism, especially the British variant. His latest book Romancing Opiates with a subtitle of Pharmacological Lies and the Addiction Bureaucracy is an insightful look behind the scenes of heroin and methadone addicts and the addiction bureaucrats that service them.

Dalrymple prose is like reading Shakespeare where every moment is a pleasure. You find yourself reading and re-reading just to enjoy the beauty with which the English language can represent ideas with simple words strung together sequentially. The enjoyment is all the more ironic when we consider the subject of much of his writings, the failure of socialism, and his personal dealings with those that have failed under it.

He currently works within the prison system where he comes in daily contact with current (new prisoners), existing and former addicts. He has recognized that they have two faces when discussing the drug problem, that of the truth and that of the faade. The truth is reserved for other addicts and Dr. Dalrymple once he gains their trust. The faade is presented to the addiction bureaucracy. Much of the book documents this well.

Romancing Opiates also covers the romantic history of opiate-based drugs (dolophine, heroin, morphine, opium, and methadone) and their cultural icons, William S. Burroughs and Thomas DeQuincey. He goes through the Romance era of Rousseau where man’s animal nature is glorified as the pursuit of pleasure with drugs being the chemical pursuit of a natural hedonistic desire. He vigorously debunks the flaws in these popular arguments about enhancing creativity and providing insight not available to those who do not partake. 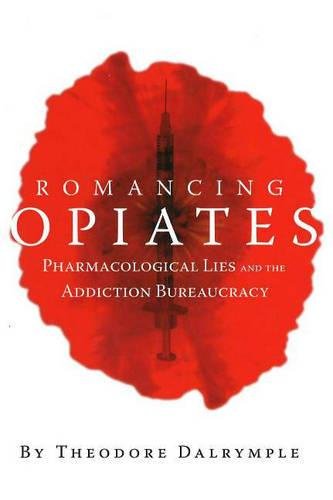 Where the book really gets interesting is when he relates individual stories of the addicts and how mild addiction to heroin/opiates really is. The “illness” is minor, passes quickly and is not at all the hideous ritual as is popularly portrayed ad nauseum by the addiction bureaucracy and their sycophants. He also provides ample evidence, from first-hand experience as a medical expert, both observation and expert witness testimony, that the addiction is not easily acquired and is easily shed when circumstances mandate. Most addicts eventually tire of the lifestyle and prison as they grow older. This contravenes the conventional wisdom of the multi-billion-dollar pharmaceutical addiction bureaucracy that in many cases provides both the product and the treatment for the kind of exorbitant profit margins that only a government-mandated cartel can provide.

The individual stories are heart wrenching but always presented as choices actively made by the participants in their lives. They are thus a natural consequence of human action. He provides enough evidence in the book to support his assertions of the falsehoods of the system that depends upon addiction for its livelihood.

Dalrymple is a vigorous critic of British Socialism and the traps that it ensnares much of the country in, along with the crushing social costs. He goes light on the tax implications. I look aside at his lack of financial arguments since he is a medical expert who talks the talk and walks the walk, which is he works day in and day out with societal flotsam and discards, knows them personally, lives in their neighborhoods. He could drive a Porsche, pop zits in Beverly Hills or find significantly greater economic remuneration if that was his motivation, but he is a healer instead. When you read his books you, like me, will believe he is a heroic one.

My criticism of this book is that he does not apply Thomas Szasz’s logic of self-medication as an alternative to established therapeutic practices which are the product more of privileged elite thought leaders than scientific reality. He does not address the immense societal cost of drug criminality due to cartel-mandated exorbitant prices, enforcement, and interdiction costs or the costs that “drug wars” impart on the citizenry of most countries of the world. He also does not criticize the existence of the cartel of which he is a member. This is all forgivable if not excusable when you look at his extensive record of truly helping the downtrodden.

He also does not discuss or criticize the massive and expensive Reagan/Thatcher drug crackdown that filled prisons, drove crimes rates sky-high, and was ultimately turned back when cooler heads prevailed. It is possible that this was the decade or so he spent on other pestholes around the world like Ethiopia, Sudan, etc.

This is actually his weakest book to date, even though it is still an excellent read. He describes the socialist system flaws at the human level but not at the theoretical level and does not offer a critique that includes a viable alternative, decriminalization and legalization of voluntary individual behavior that should be a natural outcome of human dignity and liberty.

While Dalrymple is neither a libertarian nor an Austrian, he is a firm believer in human dignity and salvation through compassionate, individual and not state-backed human action. His writings make these points clearly and without moral judgment on contravening opinions. I recommend his books for the prose, the human stories and to see a side of Socialism that most opponents can only imagine but not experience. Dalrymple is well read and if I had his address I would gladly purchase and ship a copy of Ludwig von Mises’s Socialism in gratitude for his literary contributions and the pleasure I have derived from them.

Killing the Truth in Moscow My Hospital Bill