By now all reasonable people in the world know that the Bush administration (with almost no opposition from Democrats) used 9/11 as a pretense to invade and occupy an oil-rich Middle Eastern country that posed no threat to America. Even President Bush has admitted in a press conference that there were never any WMDs in Iraq. But the war has been very profitable for some, as war always is, as it has drained American taxpayers of hundreds of billions of dollars. It has also ballooned the warfare state, the military-industrial complex, and the conservative anti-civil liberties lobby. (On the day of this writing the talking heads on the FOX War Channel were all but dancing in the streets of Manhattan in celebration of a bill passed by the U.S. Senate the previous evening that would allow for the suspension of habeas corpus. Can mass burn-the-Constitution rallies, perhaps organized by Rush Limbaugh and Sean Hannity, be far behind?)

But the state’s use of this illegitimate war to aggrandize itself goes much, much farther than this. Those Americans who are still concerned about the state’s ability to plunder us into poverty and strip us of personal liberties are extremely fortunate that Professor James Bennett of George Mason University has stepped up to explain exactly how this is happening with his new book, Homeland Security Scams (Transaction Publishers, 2006).

Read this book and the crassness, dishonesty, and plain chutzpah of the state in using the "war on terror" as an excuse to pick your pocket will boggle your mind. The average reader will also be shocked at the remarkable blueprint for fascism that has been mapped out for us by our rulers in the post-9/11 world.

Indeed, the very name "Homeland Security" has an obvious echo of "fatherland," as Professor Bennett ominously points out. "Americans have never used the world u2018homeland’ to describe their country" anywhere and at any time. The very word is un-American and reeks of fascism.

The major theme of Homeland Security Scams is stated on page 1:

"[H]omeland security is developing into the largest boondoggle in the history of the U.S. government. Fed by the . . . war on terror, homeland security is being used as an excuse . . . for a vast expansion of government power and spending." And the spending usually has nothing at all to do with "defense" or "security." "Homeland security is not making us safer: just poorer, less free, and more dependent on the federal government," Professor Bennett charges. In the following 217 pages he provides chapter and verse to prove his point.

The "scam" is that the word "homeland security" is routinely invoked to "justify" thousands of pork barrel spending programs that have nothing to do with safety or security. They are simply pork. So much money is being drained from the taxpayers’ pockets under this ruse that governments cannot spend it fast enough. "North Carolina spent only 30 percent . . . of the federal homeland security monies it had received in 2004." "Under President Bush, the Republicans have become the party of Big Government." 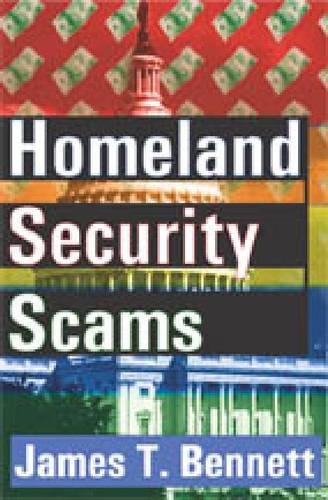 Professor Bennett has always been a libertarian-minded conservative, and is disgusted by the descent of formerly like-minded institutions, such as the Heritage Foundation, into the fascistic abyss of Big Government neo-conservatism. He writes that the Heritage Foundation was "largely co-opted by the Reagan administration" in the 1980s and has been "ever since ensconced firmly in the GOP’s right pocket." It has "abandoned any . . . interest in restricting leviathan . . . " (p. 200). The Heritage Foundation’s position papers in "the age of Bush II" sound the old, leftist themes of "Spend, spend, spend. Regulate, regulate, regulate." (This would also seem to have dire implications for the Mont Pelerin Society, of which Heritage Foundation president Ed Fulner is the longtime treasurer and board member.)

The primary beneficiaries of all this are "politicians, lobbyists, and a flourishing homeland security industry." This would also include, in my opinion, all of the neocon "think tanks," magazines, and "scholars" who are paid to provide the intellectual cover for the scam. The "one constant" that keeps the racket going is fear. As long as our rulers can continue to frighten the public with promises of "terror" their motives and actions will not be questioned by the vast majority of the public.

The Department of Fatherland (Oops, I mean "Homeland") Security (DHS) was not simply a response to 9/11. Our rulers had planned for an Orwellian bureaucracy of that sort years in advance, with the twelve-member Rudman-Hart Commission, originated under Bill Clinton’s administration. 9/11 provided the perfect excuse. Professor Bennett reveals exactly how the plot was hatched.

Meanwhile, the already gargantuan "internal security" apparatus of the U.S. government (another phrase that was popular in totalitarian societies) was a complete and total failure on 9/11 because, says Professor Bennett, it had been preoccupied for years with the non-threat of "the bogeymen of the 1990s: militias and other right-wing populist groups." The so-called militias "made a useful hate object for upper-middle-class liberals who wished to feel threatened," and the FBI, CIA, BATF, and other federal agencies gladly complied. After all, some of these "militiamen" were alleged tax evaders.

Professor Bennett gives a detailed explanation of how the Republican Party’s Deep Thinkers decided that simply renaming several dozen bureaucracies would somehow make America "safe." That, in essence, is how the Department of Homeland Security was created – by connecting "bits and pieces and chunks" of various federal bureaucracies in an effort "that would make Dr. Frankenstein proud." And it was a goldmine for every one of these useless, jack-booted bureaucracies, from the INS to FEMA, the "Federal Protective Service" and the "Domestic Energy Support Teams." The claim that they are now "fighting terrorism" is all they needed to get Congress to increase their budgets seemingly exponentially.

The language of the DHS really is eerily reminiscent of Nazi Germany. Its web site claims that its mission is "securing the homeland," a "locution so foreign to Americans as to bring a shudder to the spine." Another slogan is "Preserving our freedoms, protecting America . . . we secure our homeland." One can just imagine that there must be a continual showing of the movie "Triumph of the Will" playing 24 hours a day at DHS headquarters.

Among the more insidious effects of the state’s response to 9/11, writes Professor Bennett, is a massive miseducation of the American public about the true nature of bureaucrats and bureaucracy. "Gone forever [is] the invidious caricature of the pencil-pushing, clock-watching goldbricker: the federal employee of the twenty-first century [is] a cocky, can-do Tom Cruise, a perky and feisty Sandra Bullock." Since 9/11 "every police officer and fire fighter is a saint; soldiers are selfless heroes u2018fighting for our freedom’; CIA agents are sexy glamorous, and deeply ethical; even George W. Bush is a steely-eyed missile man, in the old Mercury Seven astronaut term of praise."

You know the pork barrel is massive when "Thirteen committees and sixty subcommittees of the U.S. House of Representatives and Senate have jurisdiction over . . . the DHS." Every member of Congress wants to be on a committee or subcommittee that can distribute pork to his or her constituents and campaign contributors under the phony guise of "homeland security."

State and local police and fire departments are also being slowly nationalized thanks to DHS pork, for with federal money comes federal controls. Conservatives used to fear the federalization of law enforcement, Professor Bennett points out, but now they champion it. Former DHS Secretary Tom Ridge once boasted that his department had "redefined a new federalism" when in fact it "is destroying true federalism" by increasingly taking over local law enforcement. His "strategy" was "to view federal, state, and local governments as one entity" (again reminiscent of Nazi Germany, where all governmental powers were centralized and under the direction of a dictator with no constitutional limits on his authority).

As for the pork, a few examples will give you the flavor of how out-of-control it has become:

As part of its nonstop assault on civil liberties the DHS employs an "entertainment liaison" whose job is to try to "shape the political content of films" made in Hollywood. Its "Computer Assisted Passenger Prescreening System II" would "for the first time put the government in the business of conducting regular background checks on everyday citizens."

The Orwellian PATRIOT Act is expertly dissected by Professor Bennett, and its entrails are revealed to be poisonous to personal liberty in American, patently unpatriotic, and useless in "fighting terrorism." This totalitarian legislation eviscerates the Fourth Amendment by permitting "sneak and peak" searches, without a warrant, of email, homes, offices, libraries, and internet records. Warrant-less searches have routinely been made by armed federal agents; and even the attorney-client privilege has been trashed by the Bush administration. The CIA has been given expanded powers to spy on ordinary American citizens and the GOP’s fascistic "internal security" bureaucracies "reach into banking, business, educational, and financial records" in an unprecedented way. The FBI has even been empowered "to force librarians to reveal the borrowing habits of patrons . . ."

Moreover, "practically any act of civil disobedience could be construed to violate the law" under the laughingly-named PATRIOT Act. This is just a small sampling of how Big Government Conservatives are hard at work destroying American liberty while the "liberal opposition" stands idly by like so many political eunuchs.

Apart from revealing the shocking degree to which the state has used the excuse of 9/11 to wage "war" on the American public by picking its pockets and destroying its liberties, Homeland Security Scams also provides definitive proof that the conservative movement no longer has any interest whatsoever in limited government – if it ever did. "The Heritage Beltway Right has gone over almost completely to the statist side," Professor Bennett laments in his concluding chapter.

Frankly, I’m not so sure they were not always on that side. After all, it was "Mr. Conservative," William F. Buckley, Jr., who announced in the 1950s, shortly after the founding of National Review, that what was needed to fight the Cold War was a "totalitarian bureaucracy within our shores" complete with high taxes, a giant military-industrial complex, expansive powers granted to the CIA and FBI, and the subsequent loss of freedoms that all of that would entail. With the exception of a dozen or so libertarians who influenced parts of the Reagan administration in its first two years (after which they became irrelevant), this statist vision has been the defining characteristic of "conservatism" in America for at least the past half century.

Previous article by Thomas DiLorenzo: My Pilgrimage to The Shrine