While reading Carl Watner's fine collection of essays, I Must Speak Out, I became engrossed in Murray N. Rothbard's 1987 article entitled, "The Political Thought of Étienne de la Boétie." I couldn't believe it, so I read it again. Where have I been sleeping all these years? Why haven't I heard of tienne de la Botie before? Just on the off chance that some of you may have missed him too, I'd like to call attention to him again.

La Boetie was born in France in 1530. Copernicus and Martin Luther were still living at the time and Francois I was King. He wrote his little treatise on government sometime in the 1550s. He died in 1563.

Rothbard was struck by the man's youthful genius and by the clarity of his thinking. He saw him as a harbinger of libertarian thinking to come. I fully agree and I recommend reading Rothbard's article. I was also struck by something else and I would like to put a short quotation in here to illustrate what I mean.

The Politics of Obedience: The Discourse of Voluntary Servitude by Étienne de la Boétie

It is indeed the nature of the populace, whose density is always greater in the cities, to be suspicious toward one who has their welfare at heart, and gullible toward one who fools them. Do not imagine that there is any bird more easily caught by decoy, nor any fish sooner fixed on the hook by wormy bait, than are all these poor fools neatly tricked into servitude by the slightest feather passed, so to speak, before their mouths. Truly it is a marvelous thing that they let themselves be caught so quickly at the slightest tickling of their fancy. Plays, farces, spectacles, gladiators, strange beasts, medals, pictures, and other such opiates, these were for ancient peoples the bait toward slavery, the price of their liberty, the instruments of tyranny. 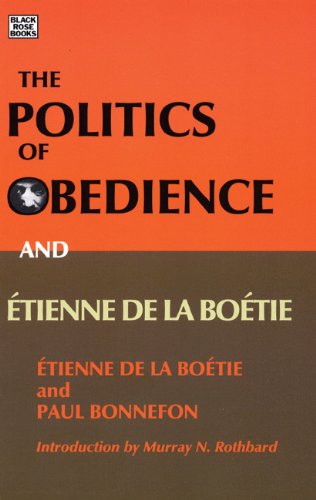 Bread and circuses. Americans would laugh at the idea that they could be duped into slavery by such trivia. Americans are much too smart for that. Besides, we have television and movies and stereo surround-sound, we don't need the Emperor to entertain us. That's true, but we do believe we need other things, like courts and cops, the Pentagon, Social Security, Medicare, Medicaid, and all of the alphabet-soup agencies, the IRS, CIA, FBI, NSA, BATF, FCC, on and on.

Americans want the good life and there is no fault in that. I too want indoor plumbing, central air and heat, a microwave oven, car, refrigerator, television, computer, privacy, and safe streets like everybody else. It's the way we live. But is there a price on the good life that we refuse to see? And is this price our liberty?

La Boetie in the Sixteenth Century pointed out the hidden cost of political government. As long as we believe that the things we want come by benevolent kindness from the state, then we quietly acquiesce to various demands from the state and the price keeps going up. The state speaks eloquently about tax-cuts and moves us to cheers, but the taxes keep going up. The state does not speak about average families who must buy food and medication on credit because their wages are gone in Social Security and Medicare and sales taxes and income taxes and fees paid for permission from the state to eat or drink or drive around. The state does not speak about the source of the soaring cost of health-care, the result of bureaucratic micro-mismanagement put in place by the state itself. La Boetie called us fools. Indeed, we are. We look longingly for the day we can have our good life and our Social Security check too without working for it anymore. Free lunch! Bread and circuses for all!

By these practices and enticements the ancient dictators so successfully lulled their subjects under the yoke, that the stupefied peoples, fascinated by the pastimes and vain pleasures flashed before their eyes, learned subservience as naively, but not so creditably, as little children learn to read by looking at bright picture books.

The problem is, socialism by any name doesn't work for very long. People loose incentive and begin to look for hand-outs from their state rather than take care of themselves. La Boetie wrote:

Roman tyrants invented a further refinement. They often provided the city wards with feasts to cajole the rabble, always more readily tempted by the pleasure of eating than by anything else. The most intelligent and understanding amongst them would not have quit his soup bowl to recover the liberty of the Republic of Plato.

While meditating briefly on the meaning of life this morning, as I do every morning, I happened to glance down at my reading table and I saw a photograph of a group of my peers all dressed in the tee-shirt of a powerful political interest group. The ladies all looked so lovely in their tightly-permed silver hair and the men so handsome and proud, though bald, like me. But their mouths were tightly drawn, not smiling, and their fists clenched and arms raised in anger. Not so good for blood pressure, I thought, what are these people doing? I read the article. Ah, they demand more! More of everything! And they want the state to give it to them!

The fools did not realize that they were merely recovering a portion of their own property, and that their ruler could not have given them what they were receiving without having first taken it from them.

La Boetie knew what he was talking about. Have we, the human race, learned nothing about the nature of human government in the last four-hundred and fifty years? Have we not repeated the mistakes of our ancestors over and over and over? Our science and our technology have thrust our species into an entirely new social environment, unprecedented in human history, and still we beg the state for bread and circuses while the state crushes us with its rules and taxes. Do we really need the state?

Three Views of the Constitution The Energy Fiasco