Liberty in One Lesson

At the Mises Circle meeting in Seattle last month attendees were given a book titled Inclined to Liberty, written by Louis Carabini and published by the Ludwig von Mises Institute (2008). This 106-page book has 34 chapters containing titles such as "The Astonishing Greatness of Inequality," "The Hazard of Equalizing Consequences," and "The Disastrous Lessons of Social Engineering." Most of them are two to four pages long. The longest one, titled "The False Lure of Democracy," is six pages.

This book explains the nature of liberty in a clear and concise fashion. It brings to mind Henry Hazlitt’s masterful 206-page Economics in One Lesson (1946; revised edition, 1979). Hazlitt’s lesson is this: "Economics is a science of tracing the effects of some proposed or existing policy not only on some special interest in the short run, but on the general interest in the long run." The subtitle for the book in its revised 1979 paperback edition is The Shortest and Surest Way to Understand Basic Economics. The same could be said for Inclined to Liberty, with it being the shortest and surest way to understand liberty.

A fitting title for Louis Carabini’s book would be Liberty in One Lesson. I might summarize the book’s lesson, in one sentence, this way: The human spirit aspires to liberty, and given liberty and freedom human action produces prosperity spontaneously — without (and unconstrained by) central planning. In the last chapter, "On the Nature of Liberty," Carabini writes, "Liberty is not a battle that requires the conversion of others in order to win. Liberty is won when you accept the idea that you are the sole master of your life; when your life is subordinate to none, and no other life is subordinate to yours. When you accept that you are liberated. There will always be those who will claim to be your master, but you will know otherwise. For a libertarian paying tribute to Caesar may make sense, but believing that tribute is Caesar’s due does not!" 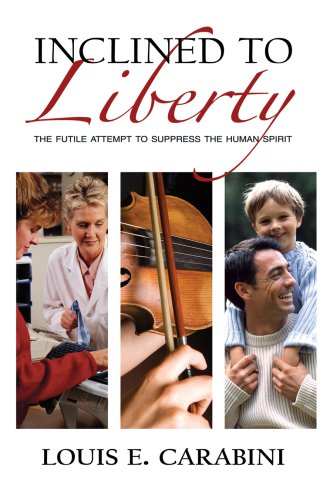 In 2004 Louis Carabini, founder (in 1967) of Monex, a precious metals trading company, hosted a dinner party for two local college professors "sympathetic to socialism, and even Marxism" that a friend knew. As expected, a lively evening ensued. Inclined to Liberty addresses various propositions these left-liberal academics offered that evening, such as "No one should be allowed to own a yacht," "The salaries of company executives are too high," and "No one should be allowed to inherit wealth."

One statement, in particular, that one of the professors made, which most intrigued the author and prompted him to write this book, was: "It is not fair that companies can terminate their workers just to increase profits." In rejoinder, Carabini writes, "If an employer is prevented from terminating employees to increase profits or reduce losses, the employer will be reluctant to hire them in the first place. In essence, if you can’t fire, you don’t hire." Taken to its logical conclusion, the socialist professor does not want employers to be able to hire employees in order to make a profit, either.

In Economics in One Lesson, after stating the lesson in the first chapter Hazlitt then applies it to a variety of economic topics such as tariffs, minimum wage, rent control, taxes, unions, profits, saving, credit, unemployment, and price controls, among other things. Carabini takes a similar approach in Inclined to Liberty in examining liberty’s lessons regarding wealth, inequality, inheritance, democracy, division of labor, jobs, and prosperity.

With regard to wealth, Carabini writes, "As the number of billionaires increases, many egalitarians will moan about u2018how sad that is,’ while in reality the greater the number of billionaires, the better off we all will be, collectively. The wealth of billionaires represents revolutionary ideas that come from exceptional individuals who push technology, create and facilitate markets, invent ways to increase productivity, or entertain us in new ways." He adds, "Take away the glory of wealth, and we lose the millions upon millions of entrepreneurs, inventors, and pioneers who would not have staked their skills, hard work, and chances to become one of the few moguls of industry who improve our well-being." Carabini also points out that for a society to prosper such people must be at liberty to spend, invest, or bequeath their wealth as they see fit. As he puts it, "An essential part of the incentive to acquire assets is the underlying sense that the holder of those assets has the ability to control their disbursement; otherwise earnings would be meaningless."

The author shows that attempts to redistribute and equalize wealth only results in making everyone poorer. When divided into quintiles (ranking the population into five equal segments from lowest to highest) the percentage distribution of income for each quintile of the population in a given country remains essentially the same. The highest quintile (twenty percent) acquires 47 percent of national income and the lowest quintile (twenty percent), 6 percent, irrespective of a country’s level of per capita income. As studies show, the per capita dollar income increases dramatically in each quintile as a country’s level of freedom increases. Inclined to Liberty shows why socialism’s quest for economic equality is futile.

So it goes, in making the case for liberty, with all of the topics Louis Carabini covers in this remarkable book. I highly recommend it.

(Inclined to Liberty is also available as a (free) PDF e-book on mises.org and also on the book’s website, inclinedtoliberty.com.)

The Best of Donald Miller

Vaccines Are DangerousWhy They Hate Sarah