“THEY WILL FIGHT TO THE DEATH.” 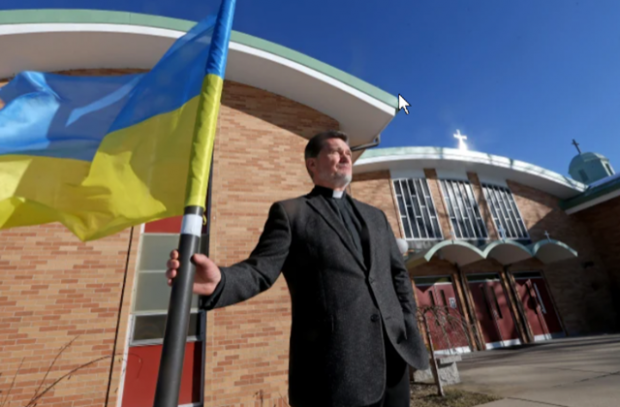 In ecumenical fairness it must be said that the Ukrainian Byzantine Catholic Church is as possessed by the idolatry of violent Christian nationalism as the Ukrainian Byzantine Orthodox Church. The fist, the gun and the bomb are also its way of being faithful to Jesus and following His imperative, “Love your enemies,” and His new commandment,

“Love one another as I have loved you.”

Dying while living in the spirits and emotions of  homicidal violence and enmity toward fellow members of the Body of Christ ruling one’s heart and mind and behavior would seem not to be a Christlike Way to die nor a Christlike Way to live, if Jesus in the Gospels is the Christ knows what He is talking about.

Do you really think that the overlords of any nation, the big wheel politicians, the extravagantly wealthy weapons’ manufacturers, the “patriotic” multinational  corporate moguls, who send millions off to war supposedly  forGod and country, care a jot about these millions’ eternal destiny, their eternal salvation?

Orthodox and Catholics after 500 years of arguing cannot agree on a common date for Easter, Pascha. Yet, both Churches agree that Jesus teaching, “Love your enemies”—which the consensus of Biblical scholarship recognizes as one of very few sentences that can be attributed to Jesus Himself and which as a sentence cannot be found anywhere in literary history before Jesus speaks it nd lives it unto His murder on the cross—is so unclear as to permit an almost infinite number of interpretations, most of which validate reciporocal enmity and homicidal violence.

Both the Catholic and Orthodox Churches teach in practice, “Where ‘love as Jesus loves’ seems to fail or is thought to be unrealistically foolish, the fist is a valid Christian alternative.”

Yes, the US Has Its Own ‘Sphere of Influence.’ And It's Huge. Crisis Actors Pretending to be dead Ukrainians Can’t Keep Still and Fox News Talking Heads Can't Stop Lying