In May 1910, the monarchies of Europe came together in London, in an opulent show of strength, for the funeral of Edward VII. War and revolution in the ensuing decade heaped assassination, defeat and exile upon them. Theo Aronson portrays the European Royal Families at War.

The Great War began as the War of the Cousins. This family feud was between cousins Georgie and Nicky on one side, and cousin Willi on the other. In their youth they all used to get together with their grandmother for family events and celebrations.

“Queen Victoria was sometimes called the Grandmamma of Europe, and there was hardly a Continental court that did not boast at least one of her relations. During World War One there were no less than seven of the old Queen’s direct descendants, and two more of her Coburg relations, on European thrones. Before it happened, can anyone blame this family of kings, or their subjects, for assuming that a war between these crowned cousins was all but impossible?”

Cousins At War, by Theo Aronson 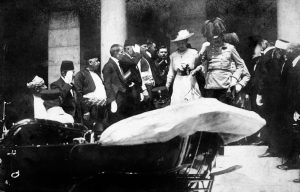 The First World War began with the June 28, 1914 assassinations of Archduke Franz Ferdinand of Austria, heir to the throne of Austria-Hungary, and his wife, Sophie, Duchess of Hohenberg, in Sarajevo by Gavrilo Princip, one of a group of six assassins (five Serbs and one Bosnia Muslim) coordinated by Danilo Ilić. The political objective of the assassination was to break off Austria-Hungary’s south-Slav provinces so they could be combined into a Yugoslavia. The assassins’ motives were consistent with the movement that later became known as Young Bosnia. The assassination led directly to the First World War when Austria-Hungary subsequently issued an ultimatum against Serbia, which was partially rejected. Austria-Hungary then declared war, marking the outbreak of the war.

Royal Cousins At War (Part I) A House Divided

Examines what impact the relationships between cousins Nicholas II of Russia, Kaiser Wilhelm II of Germany and George V of the United Kingdom had on the outbreak of the First World War. This episode focuses on the story of the emerging divisions and rivalries between the inter-related royal houses of Europe during the 19th century.

Royal Cousins At War (Part 2) Into the Abyss

The realignment of the European powers and the emergence of the alliance system in the years following the death of Queen Victoria, played a significant role for the three monarchs in the frantic, desperate days of July and August 1914.

Biden: 'Pandemic Is Over' (Just In Time For Elections!)'It’s Even Later than You Thought' - Jim Jatras at RPI Scholars Seminar