Only “Blue Lives” Really Matter to the FOP 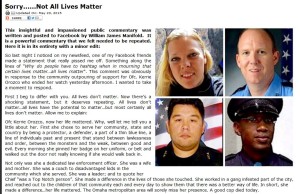 “All lives don’t matter,” insists former police officer William James Manifold in an essay that was republished by the Colorado Lodge of the Fraternal Order of Police (FOP). Although “all lives have the potential to matter,” Manifold explains, “most certainly all lives don’t matter.” For him, and other active and retired members of the Sanctified Fraternity of State-Licensed Violence, it is an unassailable truth that “Blue Lives Matter,” and that mere Mundanes should literally prostrate themselves in worship before their costumed overseers:

“[B]y whatever God you worship or don’t, by all things holy, #BlueLivesMatter…. Instead of you getting on some high horse thinking that you are being so damned enlightened with you `All Lives Matter’ bullsh*t, you should be getting on your knees thanking each and every one of those people who gave their live [sic] so you can sleep at night, so you can walk the street, so you can enjoy the safety that they provide.”

“If I’ve offended you, I honestly don’t give a sh*t,” continues Manifold, candidly expressing the institutional attitude of law enforcement as a profession. “And honestly, if you get offended that easily and don’t or won’t support our law enforcement officers then I really don’t have the time for you so good riddance. You are part of the problem.”

Those who carry out the State’s errant of violence “matter,” but this is only selectively true of lesser beings who supposedly “enjoy the blanket of protection” provided by the State and its enforcement caste. If you “show your support … turn on a blue light at night, thank an officer, attend a Citizens Police Academy,” or otherwise express the expected attitude of chastened gratitude and awe-struck reverence before the Praetorians, “you matter.” Those who “choose to walk on the `other side’ of the line, well just keep walking, they’ll get to you eventually…. You don’t matter.”

The “other side,” on this construction, includes not only criminals but critics of the police. These are lives that “don’t matter,” or — as the same concept was expressed in Germany eight decades ago, Lebensunwertes Leben.