Newsweek’s “Fake News” on Trump, the CIA, and McCarthyism 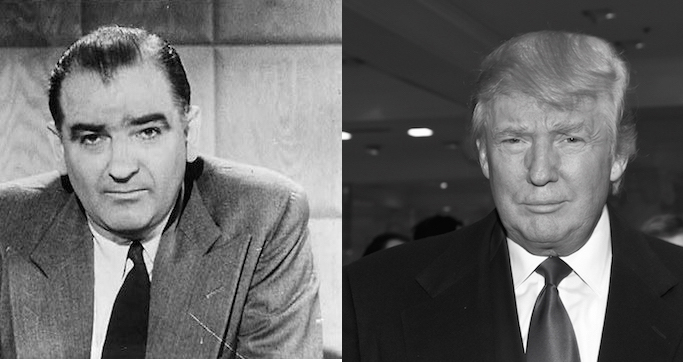 That tottering relic of dinosaur media, Newsweek, has an online article posted that is a virtual textbook model of “fake news.” It accuses President Donald Trump and the president’s counselor and chief strategist, Steve Bannon, of gross duplicity and playing loose with the facts concerning “McCarthyism” and the late Senator Joseph McCarthy of Wisconsin. What is never mentioned is that it was the CIA under director Allen Dulles, and the Agency’s Operation Mockingbird media assets (including Newsweek) that targeted McCarthy for vilification and ultimate destruction, just like the deep state Obama remnant operatives in CIA and their contemporary media assets are targeting Trump. Newsweek is also vacuous concerning the roles of Edward R. Murrow and Prescott Bush in this historical drama.

CBS chairman William Paley, Fred Friendly, and Edward R. Murrow were part of the Central Intelligence Agency’s Operation Mockingbird to provide deflection and cover for the CIA’s ‘family jewels’ of the day. CBS News president Sig Mickelson (1954-61) was liaison to the CIA. Because of his frequent communications, Mickelson even had a direct private phone line installed to the Agency. CBS anchorman Walter Cronkite was a former military intelligence officer also connected within this elite nexus.

CIA director Allen Dulles (fired by JFK after the Bay of Pigs disaster and later the key member of the Warren Commission cover-up), CBS chairman William Paley, and CBS board director Senator Prescott Bush were intimate associates in various sociopolitical networks of the northeastern seaboard establishment found in Washington and New York during the days of the early Cold War. Whether they would meet in their elite private clubs, at the Harold Pratt House of the Council on Foreign Relations, or in Wall Street corporate and bank board rooms, these old birds of a feather flocked, connived, schemed, and conspired together.

In the past at LRC I have written about the covert war in the 1950s between the Central Intelligence Agency and Wisconsin Senator Joseph McCarthy, particularly how the CIA mobilized its Operation Mockingbird media assets such as Murrow to engage in a counter-attack upon old “Tail Gunner Joe” when he was building up momentum in going after the Agency’s “family jewels” of the time after his highly-publicized campaigns against communist spies in the state department and the army.  Two interesting books of Establishment Studies (or power elite analysis) have outlined how CIA director Allen Dulles directed his counterintelligence chief James Jesus Angleton to find a means of destroying McCarthy. Angleton chose a veteran of the OSS, James McCargar, to undertake this covert espionage/disinformation action against McCarthy. These facts are discussed in Tim Weiner, Legacy of Ashes: The History of the CIA; and Gregg Herken, The Georgetown Set: Friends and Rivals in Cold War Washington.

In the fascinating and absolutely compelling book by David Talbot, The Devil’s Chessboard: Allen Dulles, the CIA, and the Rise of America’s Secret Government, we find the following:

In March 1954, McCarthy’s subcommittee convened a hearing on “alleged threats against the chairman.” One witness — a military intelligence officer named William Morgan who had worked for C. D. Jackson in the White House — stunned the subcommittee by recounting a conversation that he had the previous year with a CIA employ named Horace Craig. As the two men were discussing how to solve the McCarthy problem, Craig flatly stated, “It may be necessary to liquidate Senator McCarthy as was [assassinated Louisiana senator] Huey Long. There is always some madman who will do it for a price.” (pages 223-224).

"Us vs. Them"Assad Responds to U.S. Boots on the Ground in Syria