If the FBI Says It, It Must Be True 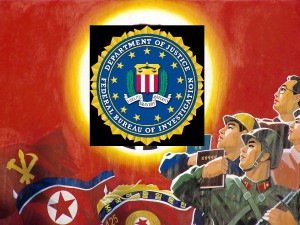 As libertarians, we’ve seen it all countless times. A friend or colleague who has been going on and on about how incompetent the government is, will say the exact opposite the second the topic turns to foreign policy. The government can’t deliver the mail on time or treat appendicitis with any sort of reliability or quality control, we are told, but in the next breath, we’re told that “we” must unite to fight the Iranians, or the Syrians, the Iraqis, or whatever other group of people the government tells us is the current existential threat to us all.

This breathless patriotism, exhibited by fearless opponents of big government, of course rests on the assumption that what they are being told by the federal government is not only delivered by the government without guile, but that the presented “facts” are beyond question. True, the feds are assumed to binept at providing train service or safe food, but the government’s ability to interpret global trends, identify threats, and carryout the perfect remedy is treated with unquestioning acceptance.

As just the latest example of the US government’s half-baked and slapdash efforts which the intelligence community still passes off as impeccable to its credulous defenders, the FBI’s solemn pronouncement that the North Korean regime had hacked Sony Corporation’s computers was treated with near-universal acceptance at first. Bill Kirstol at the Weekly Standard, for example, accepted the Korth Korea theory without hesitation, declaring:

The surrender to North Korea is a historical moment. It’s far more significant than President Obama’s announcement the same day of his opening toward Cuba. That is merely another sign of an administration’s strategically weak and morally rudderless foreign policy. The capitulation to North Korea could be—unless we reverse course in a fundamental way—a signpost in a collapse of civilizational courage.

Except that the evidence that North Korea was involved is shaky at best:

US cybersecurity experts say they have solid evidence that a former employee helped hack Sony Pictures Entertainment’s computer system — and that it was not masterminded by North Korean cyberterrorists.

One leading cybersecurity firm, Norse Corp., said Monday it has narrowed its list of suspects to a group of six people — including at least one Sony veteran with the necessary technical background to carry out the attack, according to reports.

The “evidence” against the North Korean regime was never even close to anything that might stand up in a court of law, and yet the US government saw fit to immediately begin spreading its tale that the North Koreans were responsible. This is how the American government conducts foreign policy, apparently. It’s based on hearsay and innuendo.

The North Koreans may be yet found to be involved, but as the private-sector cybersecurity groups note, there’s no way the FBI could have pinned it on the North Koreas as quickly as they did.

Meanwhile, those who claim to be “hard-headed” “practical” observers of foreign affairs (i.e., Bill Kristol, et al) and who aren’t like those chicken antiwar types, eat it all up.

There are plenty of other examples that the Feds don’t know what they’re doing, of course.

The latest escapades with ISIS, created by the US government to fight Assad our intractable mortal enemy in Syria (we are told) illustrate the ingeniousness with which the American intelligence community flawlessly manages its meddling in foreign regimes. Justin Raimondo writes:

The US was in a de facto alliance with the groups that merged to form ISIS ever since President Barack Obama declared Syria’s Bashar al-Assad “must go” – and Washington started funding Syrian rebel groups whose composition and leadership kept changing. By funding the Free Syrian Army (FSA), our “vetted” Syrian Islamists, this administration has actively worked to defeat the only forces capable of rooting out ISIS from its Syrian nest – Assad’s Ba’athist government. Millions of dollars in overt aid – and who knows how much covertly? – were pumped into the FSA. How much of that seeped into the coffers of ISIS when constantly forming and re-forming chameleon-like rebel groups defected from the FSA? These defectors didn’t just go away: they joined up with more radical – and militarily effective – Islamist militias, some of which undoubtedly found their way to ISIS

US intelligence agencies have long had a tradition of arming their future enemies (in Afghanistan, Libya, and Iraq to just name three places), but with ISIS, the US government’s pals turned on the US so quickly, we didn’t have time forget the initial “plan.”

Meanwhile, the taxpayers who were made to pay to arm ISIS one minute and then pay to fight ISIS the next, will just have to keep paying the Feds to “keep us safe.”

Foreign policy hawks will continue to defend the CIA, the FBI, and the myriad of other agencies that are accountable to no one, and which spend tax funds without limit on the latest toys, the latest torture implements, and the latest propaganda to remind Americans of what a splendid job they’re all doing.

With that latter effort, they must be doing a fine job, too, because millions of Americans who pretend to be for “limited government” will simply nod in agreement and get back to defending the poor, beleaguered CIA from its anti-torture critics.

Rothbard: Was the American Revolution Radical?a recent interview of mine on Austrian economics and libertarianism