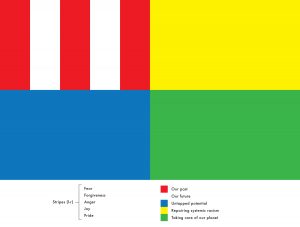 The NY Times published an article (behind their pay wall as they are desperately trying to find a way to be profitable 😄) featuring six new designs for the US flag.

This is one of them.

The New York Times is to America as Pravda was to the USSR.

I told you so. I predicted nearly thirty years ago that the US flag would come under fire under charges of “racism” (just like the confederate battle flag did then). I also predict people will say, “That’ll never happen” – in response to which, I shake my head and feel pity for such people.

This is part of a systemic and revolutionary effort to destroy the past, rewrite history, and remove all attachments to tradition, especially those of a national and patriotic nature – a Marxist ploy to destroy Western Civilization itself (read 1984 by George Orwell). The real target is that which underlies Western Civilization: Christianity. The goal is complete disorientation from our heritage of liberty and reorientation of the West to a willing enslavement.
These new designs are busy, garish, primitive, undignified, and objectively ugly. They reflect a complete ignorance of vexillological design or even the general principles of art. They look like they were designed by second graders with crayons. This reflects the ongoing infantilization of our culture.

We no longer have a concept of beauty in our culture. We are not allowed to judge something as beautiful as that implies that there is ugliness – and our lords and masters (who are ugly) cannot abide such judgment. Goodness and truth have also been jettisoned, meaning we are a culture lacking in the transcendentals. They have been replaced by the primitive and the vulgar.

Critical Theory – including Critical Race Theory – needs to be destroyed. It is a pox upon our humanity and dignity itself. It is enforced by social and legal authoritarianism, and it will take courage to oppose it. But it must be done.

Idiocracy is a documentary.

Is Vancouver, Canada, In Trouble Or Not?Dangerous Fallout From Biden's Vax Mandate