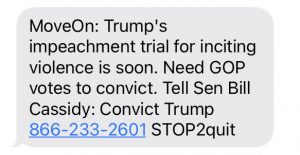 Because of a previous owner of my phone number, I am on MoveOn’s text list.  I get all of their alerts.

Ironically, MoveOn was founded during the Bill Clinton impeachment trial, trying to get the country to just forget about the President’s sexual abuse of power in taking advantage of an intern half his age within his chain of command – and then committing perjury about it afterward.  MoveOn wanted the Senate to just censure the president and just “Move On to pressing issues facing the country.”  Obviously, this was in the era before the #metoo movement – although in Bill Clinton’s case, they seem to approve of the sexual abuse.

But here we are, when it is a Republican president being impeached, MoveOn wants no part of moving on.

As for their action item to call Senator Cassidy:

First of all, the trial hasn’t even started yet.  No evidence has been presented.  Even in the House impeachment, no evidence was heard, nor was the former president given an opportunity to present evidence.  So on what basis is MoveOn calling for conviction other than their political views?  MoveOn has shown its colors, that it believes in Soviet- and Maoist-style political show trials in which political opponents are convicted without evidence.

But worse yet, did they commit the crime of jury-tampering?  Senator Bill Cassidy is one of the jurors of this case.  How is this any different than sending out the phone number of any other juror of any other case and urging people to call the juror to try to pressure him into voting for a conviction?

Sadly, very few people on the Left will criticize one of their ideological bedfellows – even if laws are being broken in order to get the political outcome that they want.

Is jury tampering within the legal rights of a 501c4 organization?