. . . for our Beloved Leader, the most popular politician in all of American history according to vote count.

What Are ‘Rights’? Supremes Take On LGBTQ ‘Discrimination.’

I’ve been subjected to quite a few of the same old repetitive campaign commercials on TV for the Warnock/Walker senate campaign in Georgia for the past few weeks.  Warnock’s commercials are:  1) That Herschel Walker is a very, very, very, bad man; and 2) Warnock is Christ-like, loved by everyone, totally selfless, a man of God, and an orator in league with Socrates.  No mention at all of how, incidentally, he is also a radical communist.

Walker’s commercials are slightly different.  I’d say about 90% claim that Warnock is a very, very, very bad man, but then some of them do mention a policy issue or two, unlike Warnock’s commercials that have not once mentioned any reason in the world to vote for him other than that he will vote to rob citizens from other states to pay for pelf for Georgian welfare parasites (including the corporate kind), and that Walker is a very, very, very bad man.

The Demo-Bolsheviks seem to have outspent the Republicans on TV commercials by at least ten to one.  All that FTX money, laundered through Ukraine, made that a cinch.

SHOCKING REVELATION!!! They Are DESTROYING EVERYTHING On Purpose!

Hollywood Was Always Red: A Rant

Actor James Woods joins ‘Tucker Carlson Tonight’ to react to reports the DNC ordered Twitter to remove the actor’s tweets, telling the government, ‘I am not afraid of you.’

Reminded me that we don’t always have to threaten bureaucrats with guns… or if we do, it’s good to humiliate them first, you know, like John Dutton does here:

Another Hit For ESG: Florida Removes Billions From Blackrock

Authoritarians struggle to get in control of as much as possible (schools, media, political parties, entertainment, etc.). They must believe that if they control it all, that their ideology will “win.” But it’s just not true. Freedom is the opposite. Freedom just needs a few small (often imperceptible) openings, and it prevails. ESG is an attempt to control the economy with an authoritarian political ideology. Freedom is already starting to burst right through it.

Is Solzhenitsyn’s Hindsight Our Foresight?

“And how we burned in the camps later, thinking: What would things have been like if every Security operative, when he went out at night to make an arrest, had been uncertain whether he would return alive and had to say good-bye to his family?

Or if, during periods of mass arrests, as for example in Leningrad, when they arrested a quarter of the entire city, people had not simply sat there in their lairs, paling with terror at every bang of the downstairs door and at every step on the staircase, but had understood they had nothing left to lose and had boldly set up in the downstairs hall an ambush of half a dozen people with axes, hammers, pokers, or whatever else was at hand?…

The Organs would very quickly have suffered a shortage of officers and transport and, notwithstanding all of Stalin’s thirst, the cursed machine would have ground to a halt! If…if…We didn’t love freedom enough. And even more – we had no awareness of the real situation…. We purely and simply deserved everything that happened afterward.”

Taking advantage of NATO’s defense umbrella, the Latvian Foreign Minister stated yesterday that Ukraine should be free to bomb targets deep inside of Russia, stating that NATO members “should not fear” any escalation. That these weapons are primarily made in the USA apparently means little to little Latvia. Also today: is Poland salivating over western Ukraine? Finally: as Congress races to shovel more money into Ukraine, a new poll shows Americans could not care less.

Public vs Private | The Historic Definitions of Socialism & Capitalism

“Many people do not know the difference between the Public and Private Sectors of Society. This is why oxymoronic terms like “State Capitalism” exist. Well, starting in Ancient Greece and Rome and moving forwards in time, we will show what the Public Sector and Private Sectors of the economy are, how they’re defined, and explain what both Capitalism and Socialism are and why they are that as well. These are the actual historic definitions and meanings backed up by the sources listed in the pinned comment, at the beginning of the video, and references will be included at the bottom of the screen.”

The Ancient City : a Study on the Religion, Laws and Institutions of Greece and Rome, by Fustel de Coulanges.  (Essential text which I read studying Western Political Thought at university which is discussed at the beginning of this presentation)

The Shadow State / Monopoly: Who Owns The World?

“The Shadow State,” a feature documentary by The Epoch Times, takes a deep dive inside the environmental, social, and governance (ESG) industry, an emerging multitrillion-dollar power structure that unites governments with corporations in the march toward a brave new world of climate and social justice. See how it works, what its goals are, and who is driving it.

Will this new global alliance bring us a cleaner, more peaceful, more equitable future, or will it bring shortages, poverty, and political instability? Will this partnership of government with banking and tech giants deliver prosperity and freedom, or will it control our lives in ways that 20th-century totalitarians only dreamed of?

This is Perhaps the Most Important Video You Will Ever Encounter. It Briefly Explains How the World Really Works.

Corrupt, thieving, psychotic, delusional, sleazy “genderfluid” pervert who boasts of enjoying sex with animals (the four-legged kind) and teaches a “Kink 101” class at a university.  And an assistant secretary of energy in the U.S. Department of Energy.

Long gone are the days when a job like that would be sabotaged by “shocking” news that the job candidate once smoked a joint in college decades earlier (Something that derailed even a Supreme Court nominee, Judge Douglas Ginsberg, during the Reagan administration).

Finally! MSM Outlets Call For Charges Against Assange To Be Dropped.

Fauci’s Back…And He Wants You To Take The Shot!

Senator Ed Markey of Massachusetts has been pestering Elon Musk by demanding in multiple tweets that he reveal “what he plans to do” about “misinformation” on Twitter.  For centuries, normal human beings with any education at all have understood that “what we should do” about perceived misinformation is to respond to it with civilized discussion based on logic and facts, not heavy-handed censorship by totalitarian-minded Leftists like Ed Markey.  Coming from a U.S. senator, these communications are veiled threats that the government may have to step in, at Ed Markey’s direction, to censor and control Twitter.

For those of you who have not spent the past several decades in academe, as I have, what the cultural Marxist university administrators and faculty mean when they accuse someone of “misinformation” is that that person has challenged their socialist lies, propaganda lines, and misinformation.  That way they practice censorship while lying about it, saying they are only battling “misinformation.”  Or they call it “insensitive,” implying that it may offend one of the Left’s mascot groups (minorities, gays, transvestites, pedophiles, “transgendered,” etc.), or they call it “hate speech.”  By the way, hate speech is protected by the First Amendment.  This is always accompanied by a university administrator’s further lies about his supposed devotion to academic freedom and free speech.  Lies upon lies upon lies.

This practice started in academe, as I personally observed hundreds of times over the past couple of decades, and has now spread to most other major institutions.  It is fascism in drag and Ed Markey is its new poster boy — or should I say, poster queen. Watch this extremely powerful film concerning a seditious coup d’état by the Pentagon’s Joint Chiefs of Staff before it disappears down the Orwellian Memory Hole. It has never been more timely or important to see.

Seven Days in May is a 1964 American political thriller motion picture about a military-political cabal’s planned takeover of the United States government in reaction to the president’s negotiation of a disarmament treaty with the Soviet Union. President John F. Kennedy had read the best-seller novel, Seven Days in May, shortly after its publication and believed the scenario as described could actually occur in the United States.

According to John Frankenheimer in his director’s commentary, production of the film received encouragement and assistance from Kennedy through White House Press Secretary Pierre Salinger, who conveyed to Frankenheimer Kennedy’s firm wish that the film be produced. JFK would arrange to be visiting Hyannis Port for a weekend when the film needed to shoot outside the White House.

The Pentagon did not want the film made for they were at war with the president.

Unfortunately Kennedy was right. He did not live to see the completed movie.

The coup d’état by the top echelon of the deep state occurred on Friday, November 22, 1963, with the brutal murder of JFK and the insidious cover-up of these events has continued for over fifty nine years.

What are the greatest threats to liberty today? Attacks on freedom of speech and expression. Watch Ron Paul’s speech at the Ron Paul Institute Conference – ‘Shut Up! Cancel Culture and the War on Speech’ – earlier this month.

A match made in hell:  Klaus Schwab (who proudly displays a bust of his inspiration, V.I. Lenin, in his office) praises the Chinese Communist Party as a “role model” for a “systemic transformation of the world.”  Just what we need in the twenty-first century — another German with fantasies about creating a master race (via “transhumanism”) and ruling the world, this time with the help of people who idolize the mass-murdering midget-freak Mao Tse Tung.  Only the devil could create such a partnership.

This speech was given in Oct. 2022, celebrating the 40th Anniversary of The Mises Institute. Be sure visit https://www.Mises.org

Dr. Paul again takes questions from our viewing audience, including one on how the country might be different had the US never gone off the gold standard. Some good lessons and interesting commentary.

The trust was unmerited to begin with, Scott, but we’ll take the actual progress.

A believer in the Warren Commission gets at least one thing right.

At least for now. Masks work and the pandemic of the unvaccinated all over again. 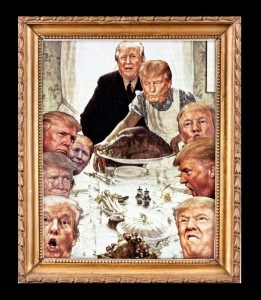 Maskholes on the Warpath

Now that the elections are over for now, a Breitbart headline reads, “Biden HHS Urges Mask Mandate.”  It’s all about justifying more vote fraud by mail in two years.