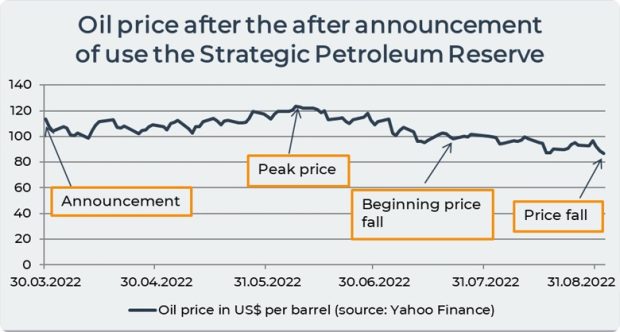 The Biden Thing and those pulling its strings wants you to think things are better – just in time for the midterms – because the cost of a gallon of gas is not as high as it was.

Outside of California, most of us are “only” paying about $3.60 or so per gallon  . . . for the moment. The idea being to get people to focus on that rather than on what they were paying before the Biden Thing came to town, when regular unleaded cost around $2.25 per gallon. When gas was getting cheaper because more oil was being produced.

Gas is now “cheaper” – so to speak – because more oil is being released.

The difference is important.

More oil being produced means lower prices resulting from an increase in supply. More oil being released – as from the Strategic Reserves – means a temporary (and unsustainable) increase in supply and an artificially induced lowering of prices that cannot last long. The hope – of the things behind the Biden Thing – is that they will stay lower for just long enough.

And then, they will go up.

Beyond where they are now – and beyond where they were, a couple of months ago. Once the elections are over – and the Things have consolidated their power – they will stop draining the Strategic Reserves. That artificial supply of oil will not be replaced by a supply of oil being produced. This will result in a reduction of supply while demand remains the same or even higher.

By Christmas, we may be paying $5 (or more) for a gallon of gas and looking back wistfully at the days when it “only” cost $3.60 per gallon.

But there’s something else we probably ought to be looking at right now. It is the cost of diesel fuel – which is still well over $4.00 per gallon in most parts of the country and more than $6 per gallon in California, where there are many shipping ports and a lot of agriculture.

WEF Uses Coded Language to Communicate Unthinkable Plans Are the Democrats About To Introduce Their Law To Safeguard the Unity of Party and State?