Just 63% of surveyed service members and family members would recommend service to someone considering it. That’s a big drop from just two years earlier, when 75% said they’d encourage others to join. The results released on July 14 are from a far-ranging survey of more than 8,600 people conducted in late 2021.

The finding is an ill omen for military recruiters who are already struggling to meet their goals. The U.S. Army Recruiting Command (USAREC) says a whopping 71% of youth do not qualify for military service because of obesity, drugs, physical and mental health problems, misconduct and aptitude.

Meanwhile, USAREC likes to call the Army a “family business,” noting that 79% of recruits have a relative who served. Substantially lower enthusiasm among those who’ve served is certain to throw a wet blanket on recruiting efforts. 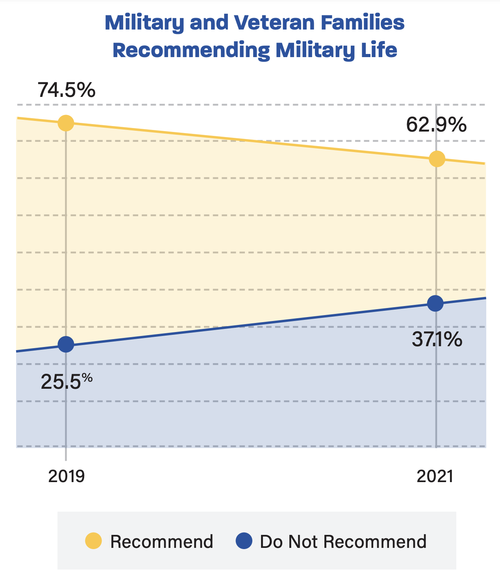 The report includes some representative quotes from respondents…

“It is not easy. It will wreak havoc in your relationship. I would recommend it if you plan on staying single and/or not having children” — Spouse of an active duty Marine.

“My husband is gone all the time requiring me to leave my job and raise the children alone. It has put a lot of strain on our marriage.” — Navy spouse

“PTSD created insecurities and other issues that held to the end of the marriage.” — Army veteran

“It is a difficult job and life, and the ‘benefits’ simply are not worth it. Especially since said benefits just keep dwindling and decreasing in quality the longer we are in. Military life not only affects the mental health of the service member but also that of their family. Additionally, I would not want anyone I care about, or even people I don’t care about, to be subjected to toxic work environments.” — Navy spouse

“With constantly PCSing, it is difficult to establish a long lasting relationship. Especially the kids. Moving, changing schools in the middle of the semester, leaving friends, etc. It’s super hard for them.” — Army spouse

“When we’re going through this report and seeing some of the findings and the reality that a lot of families are having a hard time making ends meet, it’s not all that startling to see that there will be a decline [in service members, veterans and family members recommending service],” MFAN president Shannon Razsadin tells Defense One. “But what I was really surprised by was that it was as big of a decline as it is.”

There are surely more declines to come—as more service members and veterans reluctantly realize their participation in America’s unjust and disastrous military interventions has done nothing good for their fellow citizens or the world.

Grooming Gangs: The Making of a National Scandal Big Pharma Wants To Put an End to Vitamins and Supplements