In a recent Substack article1 Adam Tooze, a financial crisis historian and director of the European Institute at Columbia University,2 reviews and explains what he calls the impending “polycrisis of doom” — a perfect storm of global socioeconomic influences that signal trouble ahead.

Using charts and “krisenbilder,” i.e., “crisis pictures,” Tooze illustrates the many interconnected stress patterns at play on the global scene. The first graphic below illustrated the situation as of January 21, 2022. 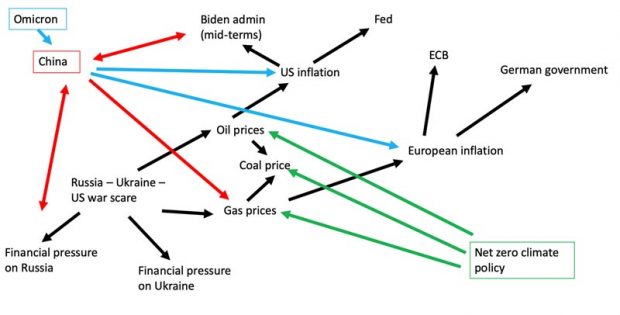 The second graphic below shows the complexity caused by the Russia-Ukraine conflict as of February 24, 2022. As noted by Tooze:3

“What was once a relatively legible map has become a tangled mess … The war has had the impact it has because it has exacerbated existing tensions. Food prices were already rising in 2021 and provoking warnings of a crisis to come.

Energy markets were stressed well before the war broke out. Now both stressors are knotted together with the war. I have highlighted in red what emerge as a series of macroscopic risks, all of which may come to a head in the next 6-18 months.” 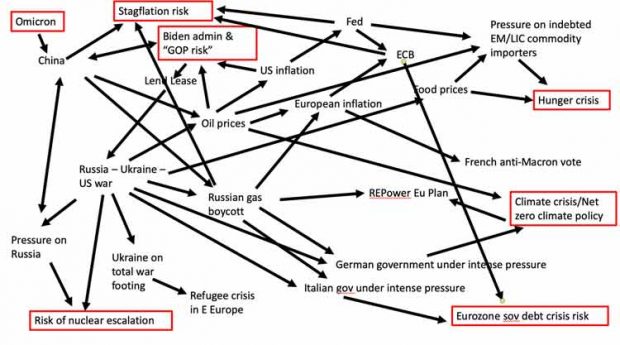 Many Crises Are Hitting All at Once

As noted by Tooze, we now face a series of significant challenges, and a) they’re hitting us all at once, and b) several of them reinforce and worsen each other. Also notable is the fact that there’s great uncertainty associated with some of them.

What might be the pandemic potential of new COVID variants? Will the Russia-Ukraine conflict escalate into a nuclear war? There’s really no way to predict with any amount of accuracy how those scenarios will play out. On the other hand, some of these forces offset or ameliorate others but, again, it’s hard to predict the likelihood of them happening.

In the following chart, Tooze summarizes the major crisis points and their likely influence on each other. Note he refers to these interactions as “entirely provisional and highly debatable.”

Indeed, some of his readers point out several additional influences that could be added into the mix, such as the weaponization of the U.S. dollar, the deplatforming of Russia from the SWIFT system, U.S. meddling in the Russia-Ukraine conflict, the push to expand NATO, allowing health agencies to dictate economic policy and much more.

Still, Tooze’s analysis — incomplete as it may be — can be useful for those willing to ponder the potential ramifications of global interactions that may be facing us over the next six to 18 months.

As explained by Tooze, “polycrisis” is not merely the presence of several crises at once. Rather, it’s “a situation … where the whole is even more dangerous than the sum of the parts.”4

A global hunger crisis seems alarmingly likely in part because all the other major risks will exacerbate that problem. ~ Adam Tooze

The reason why the whole ends up being more dangerous than any combination of crises put together is the way they escalate, compound and worsen each other in a symbiotic fashion. And, if Tooze is correct, we may find ourselves smack-dab in the middle of this polycrisis sometime in the next six to 18 months, or 2023 going into 2024. Tooze explains:5

“What this matrix helps us to do is to distinguish types of risk by the degree and type of their interconnectedness. The risk of nuclear escalation stands out for the fact that it is not significantly affected by any of the other risks.

Continuing inflation will likely function as a driver of several other risks, but those risks in turn (COVID, recession, EZ sov debt crisis) will likely deescalate the risk of inflation.

I would not say that this is a forecast, but it does bias me towards thinking that inflation will be transitory. Most of the big shocks that we may expect, tend to be deflationary in their impact.

Conversely, a recession seems ever more likely in part because the effect of most of the bad shocks we may expect — from COVID, mounting inflation, or a fiscal deadlock in Congress — point in that direction.

The obvious next step is to ask whether the feedback loops in the matrix are positive or negative. So, for instance, a recession makes a Eurozone sovereign debt crisis more likely, which in turns would unleash serious deflationary pressures across Europe.

Conversely, inflation in fact seems self-calming. The effects it produces tend rather the dampen inflation than to feed an acceleration. At least as I have specified the matrix here.

A global hunger crisis seems alarmingly likely in part because all the other major risks will exacerbate that problem. A hunger crisis, however, will largely affect poor and powerless people in low-income countries, so it is unlikely to feedback in exacerbating any of the other major crises.

It is an effect of forces operating elsewhere, rather than itself a driver of escalation. To this extent the matrix becomes a way of charting the power hierarchy of uneven and combined development. Some people receive shocks. Others dish them out.”

Near-Term Outlook for the US Economy

In a July 1, 2022, Substack article,6 Tooze takes a deeper dive into the more near-term outlook for the United States specifically. The Federal reserve is now tightening its monetary policy “more steeply than at any time since the early 1980s,” while inflation remains “stubbornly high” at the same time.

The question on everyone’s mind is, are we in a recession, and might it worsen into a depression? Recession is when a country experiences a decline in Gross Domestic Product (GDP) for two consecutive quarters, while a depression is characterized by more long-term reductions in economic activity.

According to the National Bureau of Economic Research, the U.S. was officially in recession as of February 2020.7,8 When the economy grew 5.7% in 2021, a rebound was declared,9 but then the GDP dropped again, first by an annual rate of 1.6% in the first quarter of 2022, followed by a negative 2.1% in the second quarter,10 which technically placed the U.S. in recession territory yet again.

Tooze notes that a majority of economists are optimistic and predict only a mild and temporary recession to hit in 2023, but real-time evidence doesn’t look good. As of early July 2022, consumer spending, domestic investments, mortgage applications, manufacturing and U.S. railroad cyclical cargo loads are all declining, while inflation and interest rates are rising.11,12

Consumer sentiment, an indication of people’s confidence in the economy and their willingness to spend, is also tanking at a record rate.13 Tooze ends his review stating:

“All told, you might say that this is a gloomy outlook. And there are those who are increasingly skeptical of the possibility of a soft landing. But, it is surely far too early to tell.

If the aim of the game is to control inflation by bringing about a slowdown, then the evidence we are seeing, so far, is precisely what you would look for. What remains to be seen is how the different recessionary forces interact, and whether they brew up into really heavy weather.”

Two Strategies to Strengthen Your Resilience

While we may not be able to accurately predict just how bad the situation will get, it seems prudent to say that we’re all facing some hard times. One factor that Tooze does not include in any of his analyses is the now-apparent fact that some of these crises are intentionally manufactured, with the goal of breaking apart and dismantling current systems in order to justify the introduction of entirely new systems.

The financial system and the food system are two key examples where intentional deconstruction appears to be taking place. Basically, what the technocratic elitists who fancy themselves rulers of the world intend to argue is that because the systems are no longer working, they must be “built back better.”

However, the new systems will in no way, shape or form benefit the population at large. This is true globally, not just in the United States. These new systems, delineated under the flag of The Great Reset, are slave systems which, when networked together, will form a virtual digital prison.

Every person on the planet will be under their collective thumb, as the technocrats will own everything while the rest of humanity will be allocated resources such as food and energy based on obedience criteria.

The good news is that more and more people are waking up to what this “deep state” cabal is up to, and that’s another wild card that can upend things and, hopefully, lessen the impacts of some of these crises. Two strategies that can strengthen individual and local resilience to the stresses facing us are the creation of local food systems14 and the strengthening of neighborhood and community connections.

By building a strong local food system, you reduce food insecurity, and by building a community network of specialists, you reduce the effects of a crumbling financial system as you can simply barter goods and services.

How to Build a Local Food System

While these are valuable gateways, they don’t go far enough. He provides several excellent suggestions for those willing to spearhead a local food movement in their own hometown, including the following. Williams includes several other suggestions, which you can read through in his article, but these are some of the central ones:17

•Secure local-purchasing commitments from schools, hospitals, colleges, restaurants, local grocers and other institutions — Such commitments are crucial for developing the necessary infrastructure for a strong local food market.

When you have demand from large institutions, you can then bring farmers, food processors and distributors into a complete supply chain network, as the contracts will be large enough to support everyone and make the endeavor financially viable.

•Enlist support from existing food processors and distributors — Many small-scale, family-run businesses struggle to make ends meet, and may be more than willing to become part of your local network. Two key components are slaughterhouses and trucking companies to distribute the food from one place to another. But you also need food processors that can wash, pack and dice or cut the food.

•Build a network of local farmers willing to collaborate — Individual farmers may not be able to meet the demands of large contracts, but pooling the output from several farms might.

•Build the economic infrastructure — If certain services are not available, determine what’s needed and put out a call out to the community. You never know who might be willing to start a company to fill a local need.

Keep in mind that financial productivity is key for making a local food system work. Everyone involved must benefit financially, or the system won’t be sustainable. The good news is that a local network keeps the money inside the community, and it’s easier to stay financially viable when nothing is being siphoned off to out-of-state players that don’t spend their earnings within your community.

Food banks already have trucks and are possible partners in distribution challenges. Bankers have money to lend to farmers who want to expand, distributors who need another truck, and processors that are growing to meet demand.”

Origins of the New World Order: Nazi, Germany: An Interview with Dr. Joseph Farrell The Bodies of Others: The New Authoritarians, Covid-19 and the War Against the Human