As you know, the worst people in the world have gathered to decide how they can further make our lives miserable.

One of my most provocative guests just returned to my show, with a brand new book that takes direct aim at one of the elites’ most cherished projects.

His argument is extremely convincing, and introduces considerations most people never think about. 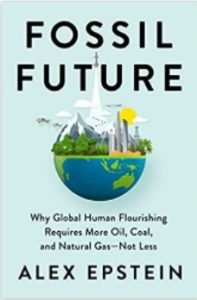 Fossil fuels, which provide 80 percent of the world’s energy, have and will continue to have the unique benefit of providing low-cost, reliable energy to billions of people in thousands of places — a benefit that is desperately needed in a world where some 3 billion people still use less electricity than a typical American refrigerator. Contrary to claims that solar and wind are rapidly replacing fossil fuels, fossil fuel use is still growing, while intermittent solar and wind energy, after generations on the market, provide just 3 percent of the world’s energy — and that 3 percent is totally dependent on fossil fuels, especially natural gas, for 24/7 backup. Solar and wind are nowhere near being able to replace the energy that fossil fuels provide today, let alone the far greater amounts of energy humanity needs going forward.

One of the key benefits of more fossil fuel use, I will argue, will be powering our enormous and growing ability to master climate danger, whether natural or man-made — an ability that has made the average person on Earth 50 times less likely to die from a climate-related disaster than they were in the 1°C colder world of one hundred years ago.

I promise you will enjoy our conversation: