The Gaslighting of the Establishment Has Reached A Critical Point

“Sir Patrick Vallance, the chief scientific adviser to the U.K. government, has warned of a potential COVID variant that could ‘escape immunity’ and take the world by surprise and called for annual COVID-19 vaccines,” reads a recent article from LifeSite News.

Sir Patrick implies that we must regularly mass vaccinate populations because this will ensure that they will not get infected by new variants.

But this is not true at all. There is overwhelming evidence that the opposite is actually the case.

Virtually all highly vaccinated countries experienced unprecedented outbreaks of Covid-19 whereby the SARS-CoV-2 virus infected and reinfected those who have received the vaccines. Consequently, nearly all widely vaccinated nations have posted their all-time case records after they had achieved their high levels of vaccination.

The United Kingdom, Sir Patrick’s homeland, is Exhibit One for this debacle.

If you look at the graphic below, you will see that on January 31 of this year Britain posted over eight-hundred thousand new infections in a single day. This was an astonishing number for a population 67 million. On that single day more than 1 percent of all Britons tested positive for the coronavirus. This was at the time when nearly 80 percent of the total population had been injected with Covid vaccines. 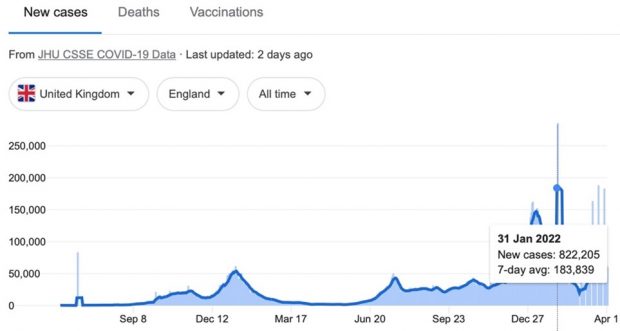 The record of that day exceeded the pre-vaccine high by several multiples.

We witnessed a similar dynamic in many highly vaccinated countries around the globe.

The vaccinators told us that this fiasco happened because the vaccines had lost their efficacy to the new variants.

In other words, the repeated failure of each new round of vaccination was excused by the claim that a new variant had emerged that escaped the immunity conferred by the vaccines against an older strain.

After the failure of the first round of vaccinating, Dr. Fauci announced that we were dealt “a sucker punch” by the Delta variant, and hence we all needed to get the third shot. But after the third shot, we were once again sucker punched by Omicron and so on.

If there is one thing that is clear beyond any dispute, it is this: the vaccines do not confer immunity that protects against subsequent variants. New variants “sucker punch” every time.

And yet, Sir Patrick says that we need vaccines to prevent immunity escape of the new variants. What he says runs in complete contravention of facts and evidence.

Sir Patrick’s words are completely detached from reality. His talk is incoherent gibberish that has no connection with the facts on the ground.

Sir Patrick is a glaring exhibit of the intellectual and moral corruption of the scientific establishment.

(By the way, Sir Patrick has served both as a high-level public health official and a pharmaceutical executive. This may partially explain his tortured logic as he is trying to push the profit-making vaccine agenda of his industry on the public.)

Scientists and public health professionals are supposed to deal with facts and reality. Instead, they deny them. We have seen this all throughout this pandemic. We can point to people like Anthony Fauci, CDC Director Rochelle Walensky, the Imperial College modeller Neil Ferguson, and dozens of others.

Almost nothing these people said has turned out to be true. They have been wrong on nearly everything.

They, however, could only rise to prominence from a wider establishment that has managed to subvert reality in a truly unprecedented way. This is the system that tells us with a straight face that Richard Levine – who now calls himself Rachel Levine – is a woman.

And to rub it in, US Today recently named him one of the top 12 women in Amerika. 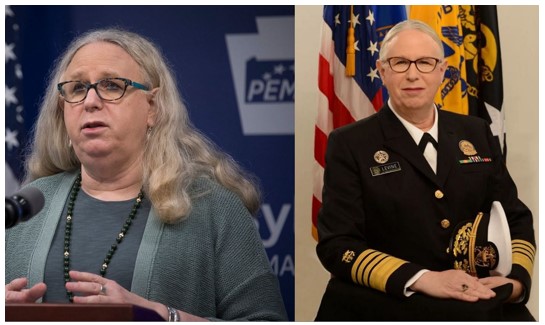 Gaslighting at its most brazen: The biological male Richard Levine – aka Rachel Levine – has been named among the top 12 women by US Today

Likewise, they celebrate a guy who calls himself Lia Thomas who has declared himself to be a girl and then beat real girls to become a NCAA swimming champion.

Fraud against women and reality: Lia Thomas is a male who beat genuine girls to become a NCAA “Woman” champion

These men are not women, because a biological man can never become a woman. A person born with XY chromosome and male genitals can never be female. This is just the way it is. Physical reality cannot be negated by wishful thinking or personal declarations.

Pretending otherwise constitutes an egregious subversion of truth. Such wholesale denial of reality is manifestation of moral confusion so profound that it veers into insanity.

The same people also told us that Joe Biden was a good and kindly man even though they had evidence of his deep corruption on his son’s drive.

If we want to survive as a society, we must put a stop to this. We must call out the gaslighters like Sir Patrick, Anthony Fauci and all those who say that Levine and Thomas are women, and that Joe Biden is an honest politician.

We must reclaim our language, and we must reclaim reality. We must not go along with the gargantuan fraud of these woke reality saboteurs.

Previous article by Vasko Kohlmayer: Deeply Compromised Biden Is Driving the West Toward a Nuclear War With Russia

Will Viktor Orban Bring Down the House That Davos Built? What If They Were Russian Cherry Trees?