Lira had been arrested on April 15 by the SBU, the Ukrainian Gestapo, but is now at some private place in Kharkov under a kind of house arrest. He is not allowed to leave the city. It seems that the public attention the case had caught has helped to hold back the nastier side of the Ukrainian authorities. Last night Alex Christoforou of The Duran published a short video talk with Gonzalo Lira (vid).

In a talk at a defense industry meeting Major General Rustam Minnekaev, Deputy Commander of the Central Military District, named areas of Ukraine which Russia wants to secure (machine translation):

“Since the beginning of the second phase of the special operation, it has already begun, literally two days ago, one of the tasks of the Russian army is to establish full control over the Donbass and southern Ukraine,” he said.
…
“This (control over the Donbass – TASS note) will provide a land corridor to the Crimea, as well as influence the vital facilities of the Ukrainian [military forces], Black Sea ports through which agricultural and metallurgical products are delivered to [other] countries,” – said the deputy commander.”Control over the South of Ukraine is another way out to [Transnistria], where there are also facts of oppression of the Russian-speaking population. Apparently, we are now at war with the whole world, as it was in the Great Patriotic War, all of Europe, the whole world was against us. And now the same thing, they never liked Russia,” he added.

The Russian ambassador to the U.S. again named the political aims:

Russia’s special military operation in Ukraine is aimed at demilitarization and denazification of the country, and Moscow will ensure that the country has a non-nuclear and neutral status, Russian Ambassador to the US Anatoly Antonov said on Thursday.

Yesterday Russia attacked four railway crossing over the Dnjepr river. One in the Zaporozhye region and three in the area of Dnepropetrovsk. 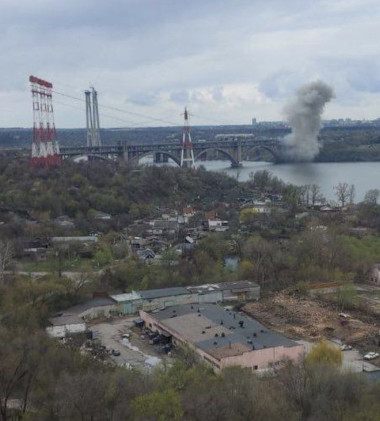 This cuts off Ukrainian troops on the Donbas front east of the river from all large scale supplies. 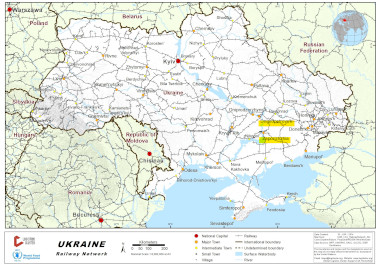 The Ukrainian military, like Russia’s, depends on railways for all long distance mass supplies as both have relatively few logistic trucks.

The U.S. and others have said they would give the Ukraine dozens of 155mm towed artillery guns plus tens of thousands of shells with them. The U.S. guns come with one truck each to tow the gun.

That is all manageable so far but now let’s look at the logistics (especially without railways). A 155mm shell plus the powder needed to fire it weighs about 50 kilogram. A three axle military truck can carry 7.5 metric tons or 150 shells. That’s about what one or maybe two guns will fire on a good day.

The distance from the Ukrainian border with Poland to the Donbas front is about 1,200 kilometer (~800 miles). That is at least a two days drive with a truck. The daily supplies for one gun on the frontline will thus require constant traffic of at least 6 trucks plus all the fuel needed to run them. Adding maintenance and load/unload time means even more trucks. Now multiply that with the number of guns that are supposed to come in.

This is very fast becoming a huge transport operation with lots of trucks the Ukraine does not have. So how will it get all those shells to the frontline? It won’t.

Since the launch of phase two of its operation the Russia military has not started any larger offensive but has increased its artillery fire on the frontline. Here is a part of the ‘clobber list’ from this morning’s Russian Defense Ministry briefing:

One artillery firing missions usually includes multiple guns (often 6) and multiple shells (3 to 10) fired per gun. This constant incoming artillery fire will be extremely demoralizing (and deadly) for the Ukrainian troops on the frontline. (I have experienced only one artillery onslaught, during officer training and in a safe bunker. It was still extremely violent. Some of us literally wet their pants.)

The Ukrainian soldiers can only dig in, keep their heads down and hope to not receive a direct hit. Their artillery is gone. They have no way left to respond to the fire. After a few days of this the Russian troops will be able to roll them up with little difficulties.

Reprinted with permission from Moon Of Alabama.

For a Good Time, Call 1-800-LONG-COVID Daddies in Mommie-land