More proof that mRNA shots are just as risky politically as they are medically.

Even the bluest state has now essentially given up on forcing kids to take Covid jabs.

On Thursday, California – which seven months ago became the first state to announce plans for a Covid school vaccine mandate – said it would delay the requirement until at least the 2023-24 school year. The state had previously said it expected the mandate to take effect in July.

A few hours before, a California state senator dropped a bill that would have made the shots all-but-mandatory by removing the “personal belief exemption” for them. He had introduced the bill only in January, proof of how quickly the political winds around vaccinations have changed, even in California.

The senator, Dr. Richard Pan, said he had decided to “hold” his bill until “children’s access to COVID vaccination is greatly improved,” the lamest possible excuse given the fact that vaccines have been freely available for kids 5 and up since late October.

But even the most clueless parents now know that the mRNA jabs stop working within months – if not weeks – against the Omicron variant. At the same time, no matter how much MSNBC they watch, parents have realized Covid presents effectively no risk to children who are not severely ill or morbidly obese.

Thus, even in California, only one in three kids aged 5-11 has been fully vaccinated (counting “fully vaccinated” as two mRNA shots, and not three, or four, or 12, or whatever the current manufacturer/compliant health bureaucrat recommendation is). For black and Hispanic kids, the number is barely one in five. 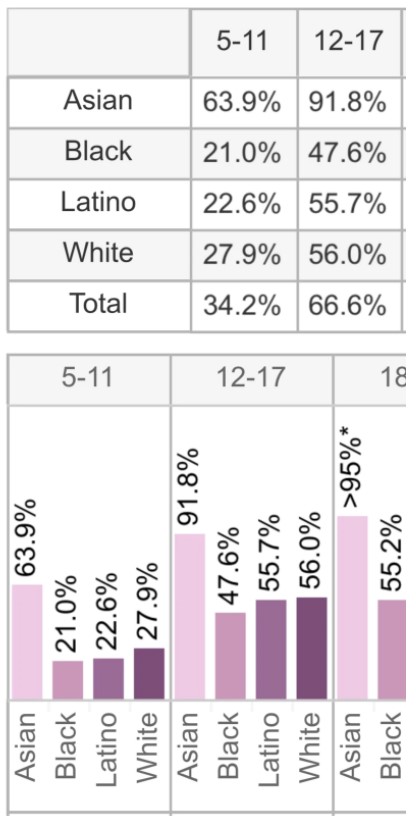