#standwithUkraine -because no matter the politics, no nation should be attacked.

Just to get it out there, I believe we all should #standwithUkraine, because no country should be attacked by another – politics aside. Because people are hurt and dying – as a physician, I can not support this kind of warfare. That said, the United States and the world have entered a dark time, and the end of this war is not in sight yet.

So what now? We know that no matter what happens with Russia and Ukraine in the coming days, weeks and months, the situation is dire. I am not going to go further into this issue here, except to say it breaks my heart to hear of the destruction, injuries and death. It is horrific for all people involved.

As some of you know, Jill and I predicted the supply shortages well before they happened with the COVID-19 Alpha strain in 2020.  So once again, Jill has been doing some due-diligence to help us and our little farming operation anticipate potential impacts, and has come to the conclusion that we all need to be aware that more shortages and general economic hardships are likely on the way due to both the current economic situation and the Russia/Ukraine disruptions.

That translates into these products being the top ten exported from Russia: 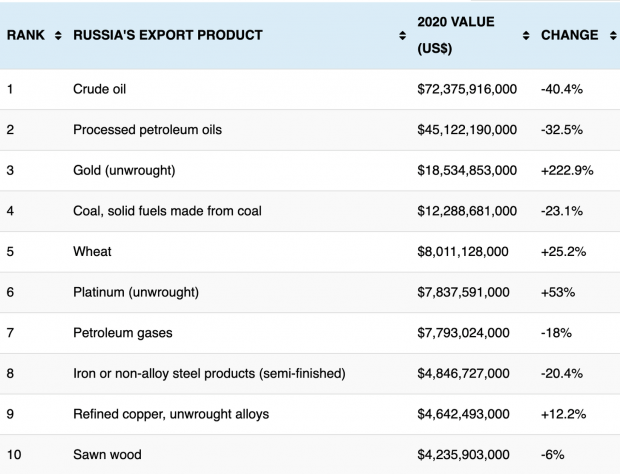 That comes to less than 75% of total items exported. So there are a lot of smaller things, for example alcohol (Vodka) is not on the list.

Russia imports mostly from China ($47.1B), Germany ($30B), Belarus ($13.4B), United States ($9.21B), and Italy ($8.79B). Given the size of the Russian economy, these imports numbers do not seem very big. So, I think we can assume that the sanctions will only have a modest impact on Russia – especially since it is unclear whether China will join with the sanctions at this time. China is tightly controlling their media, but what has been expressed is that they believe they will have a special role in negotiating an end to the “special military operations” (their words).

We also know that transportation can not turn on a dime to fill the whims of war and sanctions.

The size of the Ukrainian economy is ranked 64th out of 190 countries. So, it is much smaller than Russia. Here are the top 10 Ukrainian exports: