Why Bother With Restrictions if Everyone's Going to Get Omicron Anyway?

A science editor for the Süddeutsche Zeitung can't work out what we're even doing here, but he wants us to keep doing it.

The pandemic is drawing to a close all across Europe. The Netherlands and Denmark are taking steps to end containment, following the lead of the United Kingdom. Germany’s own hysteric-in-chief, health minister Karl Lauterbach, expects 400,000 infections a day in February whatever we do, but he nevertheless insists we are “on the right path” in continuing our pointless restrictions.

All of this leaves Werner Bartens, the chief science editor at the Süddeutsche Zeitung, vaguely uncomfortable. What are we even doing anymore?

It’s unclear to many how they should behave right now. Should we continue to be cautious because the most difficult phase is yet to come? Or is it better to let the pandemic run its course, if everyone is just going to catch it anyway? Are we simply paralysed by fear, such that we can no longer return to normality? On the one hand, politicians are urging caution, while on the other hand, regional restrictions are being relaxed, even as the normal hospital wards are filling up with more Corona patients than at any time since the start of the pandemic.

That last sentence is a total lie.1 Hospitalisations are rising, but they’re not at their highest point, and ICU cases and death counts continue to decline. 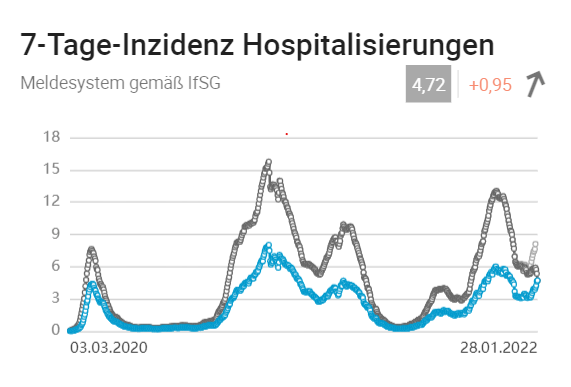 Hospitalisation incidence from the RKI: Because of substantial reporting delays, there are two values: The blue dots represent the lower values initially reported for each day, the grey dots the higher, later adjusted values.

Bartens first calls up a social psychologist to see if he can help him understand things.

“To me, the situation feels like the last third of a film: The tension is rising and everything is coming down to one decisive question,” says Mario Gollwitzer, a social psychologist at Ludwig Maximilian University in Munich. “Instead of good or evil, the question really is just: Will Omicron bring in the endemic phase?” Comparisons with other countries aren’t that useful for predicting this, because “Germany’s special problem,” in the words of Lauterbach, is having the second oldest population in Europe … and a large number of unvaccinated elderly people, and this requires a special approach.

This doesn’t make any sense. The endemic phase begins when we decide it does; we could’ve declared Corona endemic last year if we wanted to. All endemic seasonal respiratory viruses surge in the winter. Otherwise, it hardly matters how many olds Germany has, or how thoroughly vaccinated they are. Nearly all susceptible people are going to get Omicron in the coming weeks whatever we do. It is the monsoon, and we are trying to stop the rain with umbrellas.