Did the Twitter punks who banned mRNA vaccine inventor and bona fide vaccine expert Robert W. Malone, M.D. just set off the Mother of all Backfires?

Kind of looks like it, now that they’ve drawn so much public interest to the man that they’ve apparently broken the Google algorithm for censoring stories about him.

Shortly after Malone was banned on Twitter, he did an long interview with bigfoot podcaster, Joe Rogan, arguing that the disinformation and repressed information on COVID vaccines was something resembling mass psychosis.

That term, and related ones, created widely divergent results between Google and its biggest rival, the more objective DuckDuckGo search engine.

Here’s a video showing how the algorithms got broken:

We are witnessing Google’s real-time censorship of the term “mass formation psychosis” as mentioned by @RWMaloneMD on @joerogan podcast. Don’t let them get away with it! Listen to the episode for yourself. pic.twitter.com/wvvmN6X3Uw

Which ought to be kind of embarrassing to Twitter and the rest of the tech barons trying to stomp him out from any Internet media presence based on his inconvenient ideas about the risks of the mRNA vaccines. Although Malone is a giant in his field and hard to discredit the way they can do with assorted pipsqueaks out there, somehow they think they need to silence the man. On Google, they’ve tried to paint him as a nut, a conspiracy theorist, a vaccine skeptic, a Nazi, based on the search results they tried to throw up.

But the truth got out anyway, and their manipulated algorithms have been exposed, discrediting them, and in any case, not working. All they managed to do was promote him bigger than ever, generating so much public interest in his ideas and warnings that they busted the Google algorithms. Twitter’s Katzenjammer Kids who started this ought to go into public relations. One wonders what the conversations must be like right about now between Twitter and Google barons. 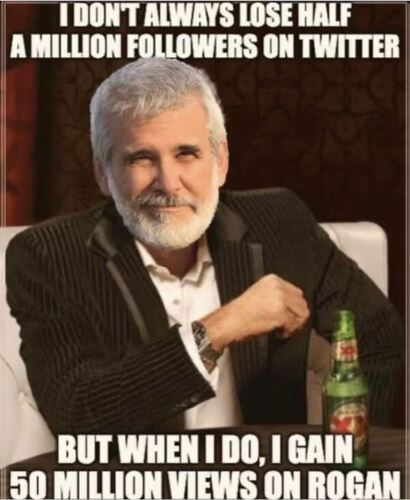 What’s more, the idiots created huge numbers of Malone-related terms on Twitter itself, with people passing around thousands of shares of Malone speaking on with hashtags under Malone, JoeRogan, masspsychosis, and related words. The podcast itself is at a link here, but valuable little clips are easily spotted through these hashtags on Twitter. They’re pretty good at own-goals, too, over at Twitter.

Dispatches from the New Normal Front: The Ministry of Truth’s War on ‘Misinformation’ (When 2 + 2 = 4 Is Verboten) Privatize Education