I&I/TIPP Poll: The Distrust Of Scientists Is Widespread — Including On COVID Vaccines

From coronavirus vaccines and the virus’ origin to climate change, a substantial portion of the country distrusts scientists to do their jobs honestly and capably. The latest data from the September Issues & Insights/TIPP Poll also found significant differences among Americans of different political views, reflecting a growing politicization of science in America.

The I&I/TIPP poll asked Americans “how much trust do you place in scientists” in three areas of science prominent in today’s headlines: “vaccine safety,” “climate change,” and “coronavirus origin.”

Overall, among the three, vaccine safety was tops in scientist trust, at 61%. Perhaps not surprisingly, that almost perfectly matches the share of the U.S. population currently vaccinated: 63%. 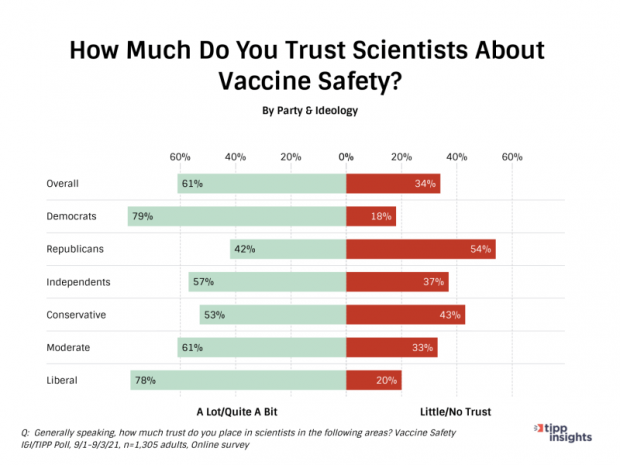 But just 45% said they trusted scientists when it comes to the actual origins of the coronavirus. A scientific debate has raged over whether the virus originated in a Wuhan “wet market” or in the Chinese-government-run Wuhan Institute of Virology. 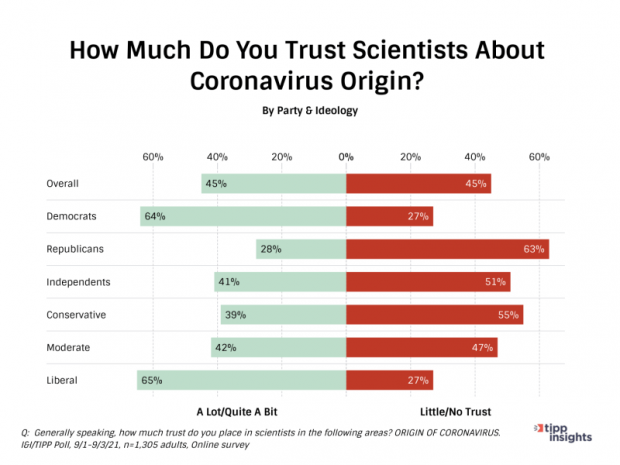 The debate revived this month after revelations that the U.S.’ top COVID-19 scientist, Dr. Anthony Fauci, helped fund dangerous gain-of-function virus research at the Wuhan lab. That laboratory has been implicated as the likely site for the creation and subsequent release of the deadly COVID-19 virus.

As for climate change, just 54% of those queried said they trusted scientists, a sign of significant mistrust despite overwhelming media sensationalism and extreme political bias on the global warming issue. 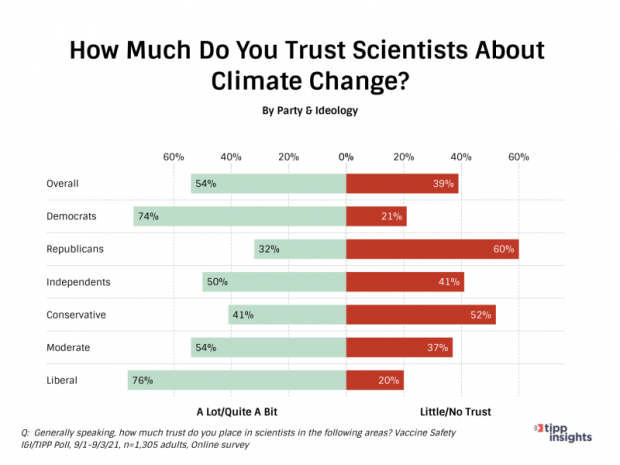 September’s data come from the monthly I&I/TIPP poll, conducted by TechnoMetrica Market Intelligence, I&I’s polling partner. The online poll of 1,305 adults was taken from Sept. 1 through Sept. 3. The poll, part of a broad new public opinion collaboration between Issues & Insights and TIPP, has a margin of error of +/- 2.8 points.

By far, the greatest differences of opinion on these questions seem to come from political party affiliation.