Every financial crisis ultimately boils down to a liquidity crisis, namely: Not enough fiat dollars to keep the financial wheels sufficiently greased.

Below, we look at two warning signs from Wells Fargo (NYSE: WFC) and the reverse repo market which warn of precisely that: a liquidity crisis.

From Debt Binge to Credit Crunch: A Chronicle of Excess

In a world in which consumers, corporations, and sovereigns have falsely confused debt-based growth as actual growth, a liquidity crisis is not a theoretical debate, but a mathematical certainty.

Of course, that debt, for years, has been “monetized” by increasingly debased currencies and rising money supplies created literally from central bank mouse-clicks rather than productivity, as evidenced by the embarrassing fact that global GDP is less than 1/3 of the global debt.

Needless to say, money (i.e., “liquidity”) created out of thin air, and then justified with even thinner (yet comfortably titled) policies like Modern Monetary Theory has its temporary charms.

It Was the Best of Times…

Risk assets—namely stocks, bonds and real estate– love easy money, be it printed out of nowhere or lent at rock-bottom (and artificially repressed) interest rates. 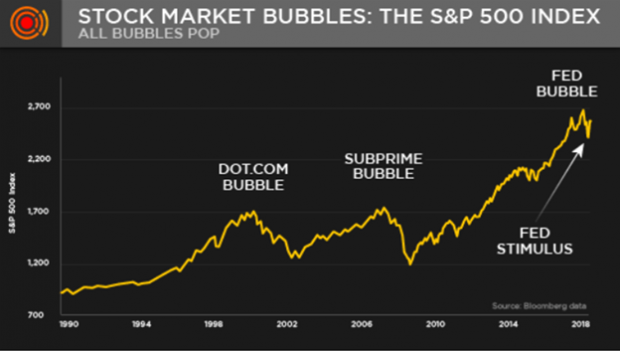 For years, the big boy corporations on the major exchanges have been borrowing trillions per annum to buy their own stocks and/or pay dividends, which naturally makes stocks go up rather than down.

In short, when money is flowing, risk assets rise on a rising tide, even if that tide is artificial, “printed,” pretended or extended (yet ultimately a source of financial drowning).

It Was the Worst of Times…

In the meantime, those good-time rising tides benefited an increasingly smaller segment of the social-contract, which explains why historical levels of wealth inequality have led to equally inevitable (and rising) tides of undeniable social unrest.

Despite the fact that such appalling debt dangers existed long before COVID, the “experts” now conveniently blame our fractured societies (and growing debt burdens) on a pandemic while distracting the masses with a media that is far more obsessed with transgender bathroom rights, racial headlines, the latest COVID variant and the sorrows of Prince Harry than they are with the fact that our financial system is rotting right below our feet.

This financial rotting has real consequences for society not just market analysis.

After all, social unrest always follows a financial crisis (and inequality), despite the perpetrators’ best efforts to shield themselves from blame.

Of course, as every magician (or covert operative) knows, the best way to pull off a trick is to distract the audience from the real slight-of-hand, allowing the hocus-pocus of a self-inflicted financial disaster to hide from immediate view via lies of omission rather than the courage of accountability.

Perhaps the greatest of these lies was the daily-telegraphed message that extreme money printing and debt expansion was only “temporary” and “under control” as opposed to a full-out addiction which always ends in a fatal financial overdose.

For years, we’ve been told that $28T in global central bank money printing was not inflationary, and finally, when that inflation did rear its head, we’re now being told it’s only “transitory.”

Most, however, know better.