The De Gaulle-Johnson Intervention to Break the Empire [Part one]

In this first installment of a four part series co-written with my friend and historian Raynald Rouleau, we will meet a network of alliances that formed in France and Quebec under the leadership of Quebec’s Premier Daniel Johnson Sr. and French President Charles DeGaulle from 1967-1968 who intended to create an international program for development in opposition to the Anglo-American Empire that has been written out of modern history. Just as this plan was blossoming, assassins bullets ended the lives of Bobby Kennedy and Martin Luther King. The life of Daniel Johnson Sr was cut short under extremely suspicious circumstances during this same period leaving Charles De Gaulle to stand alone in the face of a new global paradigm shift which soon saw his leadership overthrown in 1969 under a London-directed neo-Jacobin movement of anarchism in France. 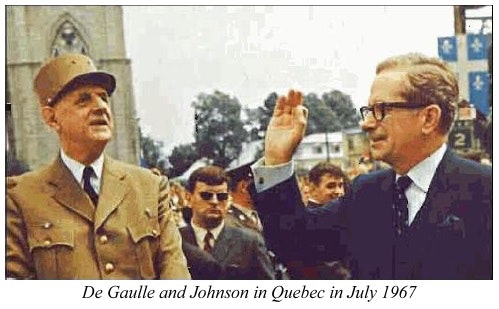 Their stories are told here for the first time.

The Origins of the Parti Québécois

The founders of the Parti Québecois (PQ) never had the intention of transforming Quebec into a truly sovereign country: that is to say, a constitutional republic, independent of the British Empire. A republic that would be built upon the inalienable rights of citizens, as these were defined and later enshrined in the preamble of the United States Constitution by the founding fathers of the American republic, as the right to life, liberty and the pursuit of happiness.

We are not referencing the actual leaders of the PQ, but rather those who, from the beginning, catalyzed the PQ into existence and continue, to this day, to forge and profit from the artificial divisions that were partly successful in setting up the larger segment of the population of Quebec, the French speakers against the English speaking Canadians living in Quebec and the rest of Canada. A perceived unbridgeable divide that was famously called The Two Solitudes, in earlier times.

In fact, these catalyzers of the separatist movement had fought tooth and nail against Daniel Johnson Sr. who was among the leading nation-builders in Canadian history and one who did have a mission to implement a constitutional republic for Canada modelled on the American constitution.

The PQ was created 16 days after the tragic death of Daniel Johnson, the then Premier of Quebec. The goal was simple: attract all separatist-nationalist forces; whether they be left, right, communist, socialist, catholic or Masonic. The game plan was straightforward: maintain the separatist movement as a wedge issue, a divide and conquer British Empire tactic and prevent a Johnson solution that would overthrow the British stranglehold over Canada.

The Origins of the Deep State in Commonwealth Nations

Before Canada was ever given the legal status of “country”, the term in usage was “Dominion of Canada”; an appendage of the British Empire within the North American continent, administered by Crown Agents, and Rhodes Scholars across hundreds of institutions.

This structure still exists to this day.

In this organization’s official history “A Short History of Crown Agents and Their Office”, by Arthur William Abbott, we read that:

Crown Agents work directly through such key organizations that run the upper echelons of the Civil Service of Commonwealth Nations. It is not within the corporate boards of directors or even parliament, but here in this hive, where the real directing power of Canada is located.

As for the Parti Québécois itself, it was founded by René Lévesque. The 1973 biography of Lévesque written by Jean Provencher documents how Lévesque was recruited by an agent going by the name of Robb during WW2, who was the Montreal bureau chief of the Office of War Information 2 (OWI), [3] a nominally American intelligence service, but which often operated under British influence.

Freedom vs. The Machine; Geneticists and Their WeaponsIt Always Ends the Same Way: Crisis, Crash, Collapse