The number of reports of injuries and deaths following COVID vaccines continues to rise, according to data released today by the Centers for Disease Control and Prevention (CDC). The data comes directly from reports submitted to the Vaccine Adverse Event Reporting System (VAERS).

VAERS is the primary government-funded system for reporting adverse vaccine reactions in the U.S. Reports submitted to VAERS require further investigation before a causal relationship can be confirmed.

Every Friday, VAERS makes public all vaccine injury reports received as of a specified date, usually about a week prior to the release date. Today’s data show that between Dec. 14, 2020 and April 30, a total of 157,277 total adverse events were reported to VAERS, including 3,837 deaths — an increase of 293 over the previous week — and 16,014 serious injuries, up 2,467 since last week. 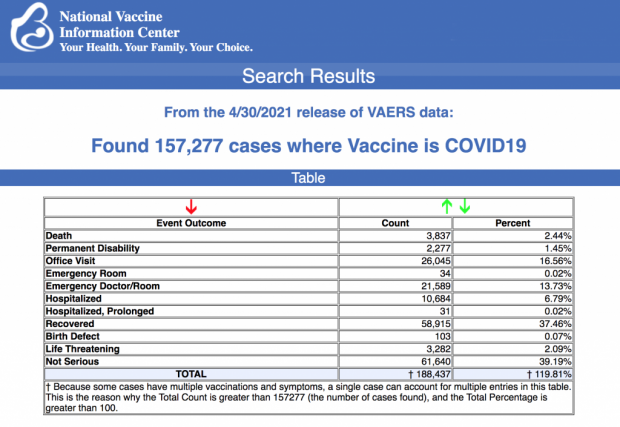 On May 4, The Defender reported the U.S. Food and Drug Administration (FDA) is preparing to authorize use of the Pfizer-BioNTech COVID vaccine in adolescents 12 to 15 years old by early next week.

The company said it also plans to ask the FDA to expand Emergency Use Authorization for its vaccine for children ages 2 to 11 in September.

According to CDC data, the death rate among adolescents ages 0 to 17 who get COVID and are subsequently hospitalized is 0.7%, with many experiencing either mild or no symptoms at all. The COVID death rate in all adolescent age categories is less than 0.1%, leading some experts to question whether vaccines should be targeted to an age group that so far appears to be mostly spared from severe COVID.

As CNN reported Friday, Pfizer filed for full FDA approval for its COVID vaccine for people ages 16 and up. The FDA requires vaccine manufacturers submit data on manufacturing processes, facilities and additional information that demonstrates the vaccine can be produced reliably and consistently.

Once all the required information is submitted, a goal date will be set for a decision by the FDA. Pfizer requested priority review, which asks the FDA to take action within six months, compared to 10 months designated under standard review.

On May 6, The Defender reported doctors at University of Utah Health treated the third male to develop vaccine-induced thrombotic thrombocytopenia in the U.S.

The man, under age 50, received J&J’s vaccine in early April. Ten days later he experienced pain in his toes, which then progressed to his thighs. He later began experiencing chest pain. A CT scan revealed a bilateral pulmonary embolism. Physicians discovered low platelets and blood clots in his legs and lungs, leading them to suspect VITT was the cause.

On May 4, The Defender reported a 35-year-old Michigan woman died from complications 11 days after receiving J&J’s vaccine. The woman’s family said her headache started on April 16 — eight days after being vaccinated. She died three days later. Her death certificate notes a natural death, specifically from an acute subarachnoid hemorrhage, or bleeding between the brain and tissue around the brain.

The attending physician filed a report to VAERS. In an email to the family, the CDC confirmed her death had been reported to VAERS, but said the system is not designed to determine whether a reported adverse event was caused by the vaccine.

Children’s Health Defense queried the VAERS data for adverse events associated with the formation of clotting disorders and other related conditions and found 2,808 reports for all three vaccines from Dec. 14, 2020, through April 30.

Of the 2,808 cases reported, there were 1043 reports attributed to Pfizer, 893 reports to Moderna and 860 reports to J&J — 847 cases more than U.S. health officials acknowledged during the April 23 meeting where it was recommended the pause be lifted on J&J’s vaccine.

On May 3, The Defender reported Denmark became the first country to exclude J&J’s COVID vaccine from its vaccination program over a potential link to blood clotting disorders.

The Danish Health Authority said in a statement it had concluded “the benefits of using the COVID-19 vaccine from J&J do not outweigh the risk of causing the possible adverse effect in those who receive the vaccine.”

“Taking the present situation in Denmark into account, what we are currently losing in our effort to prevent severe illness from COVID-19 cannot outweigh the risk of causing possible side effects in the form of severe blood clots in those we vaccinate,” the health authority said.

CDC ignores The Defender, no response after two months

According to the CDC website, “the CDC follows up on any report of death to request additional information and learn more about what occurred and to determine whether the death was a result of the vaccine or unrelated.”

The Defender reached out to the CDC on March 8 with a written list of questions about reported deaths and injuries related to COVID vaccines, the status of ongoing investigations reported in the media, if autopsies are being done, the standard for determining whether an injury is causally connected to a vaccine, and education initiatives to encourage and facilitate proper and accurate reporting.

We have made numerous attempts to contact the CDC via phone and email. As of May 7, 60 days after our initial inquiry, we still have yet to receive answers to our questions.

The Disney Corp. Has Taken a Deep Dive Into Race HatredThe ‘Fascist Left’: Myth or Reality?