The Cryptoverse – Bastard Son of the Fiat

Goodness gracious, me! Is this the ultimate case of the pot-calling-the-kettle-black or what?

If there were ever a pure play in the great fraud of fiat, Elon Musk is it. Yet here he is electing to go with crypto instead.

The true battle is between fiat & crypto. On balance, I support the latter.

Actually, there is a seminal picture in these few words and it amounts to this: Crypto currencies are not money, they are the latest boiling hot speculative asset class that, ironically, is just another bastard spawn of the central bank money-printers. They are not an alternative to bad central bank money; they’re are an issue from its own loins.

It’s blatantly evident that neither Bitcoin nor any of the other swarming herd of cryptos are a store of value or a medium of exchange. During the last 48 months, for example, the value of Bitcoin has changed on a monthly basis as follows.

As to a means of exchange for anything less than a $125,000 Tesla (for a time), a good old fiat wire transfer, check or chunk of cash has a lower transaction cost as a percent of purchase price. 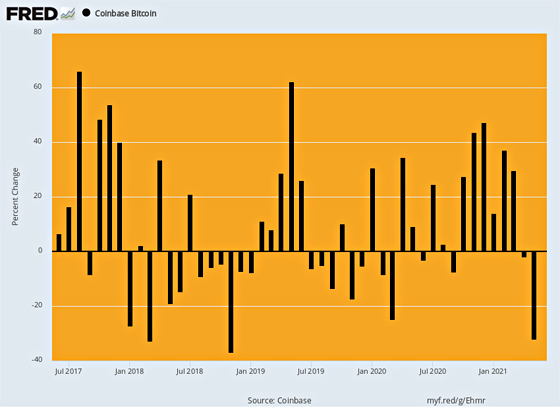 For want of doubt, here is the same 48-month data for Ethereum. It’s actually been even more erratic: 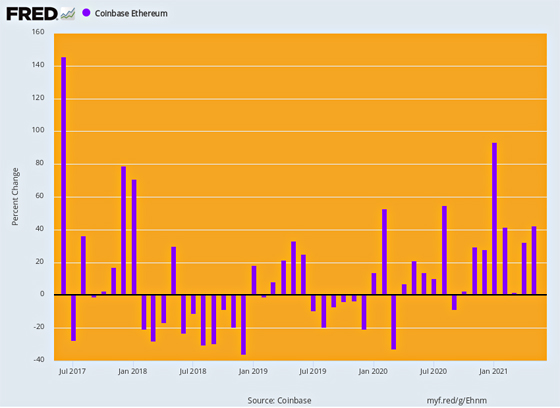 The larger point is that central bank balance sheets have exploded during the last quarter century – from about $2 trillion in 1997, to $7 trillion by the eve of the financial crisis in 2007, and then to upwards of $35 trillion at present. Relative to GDP, this hyper-surge of money printing has turned the statistics upside down.

Thus, 24 years ago in 1997, the world’s central bank balance sheets stood at about 6% of the worldwide GDP of $32 trillion, a figure only slightly higher than the 3-6% range which had prevailed prior to the Greenspan era.

A decade later, however, that ratio had grown to an unprecedented 12% of global GDP, and then it was off to the races: Central bank balance sheets now represent more than 40% of world GDP, and they are being expanded by roughly $400 billion each and every month, with $250 of that coming from the US and ECB alone.

Needless to say, the Fed is leading the global convoy of money-printers. During the year ending in March 2021, nominal GDP rose by $500 billion, while the Fed’s balance sheet expanded by $3.5 trillion during the same span.

Even if you delete the disaster of the initial lockdowns during the second quarter last year, you get the following out-of-this-world figures for the two quarters from September 30, 2020 to March 31, 2020:

So, yes, there is a reason why the crypto asset class is flying skyward just like more conventional assets: Namely, the real economy can’t possibly absorb the central banks’ torrent of liquidity. So it never leaves the canyons of Wall Street and the other global financial markets with which it is full integrated on a 24/7 basis and, instead, is being channeled into the greatest speculative mania that the world has ever seen.

For want of doubt, just consider the massive liquidity pumping of the world’s four largest central banks – US, ECB, China and Japan – during the last 14 years.

Taken together, their balance sheets have grown from $4.9 trillion in 2007 to $29.3 trillion as of April 2021. That $24.4 trillion or 5X gain actually exceeds their $19 trillion gain in collective dollar GDP, which rose from $35 trillion to $54 trillion over the same period:

That this massive outpouring of central bank liquidity has inflated financial markets on nearly a lockstep basis is beyond dispute. As shown in the chart below, the correlation between the pace of Big Four central bank balance sheet expansion and the rise of the global stock market index (MSCI AC World) is 0.94 since 2009. 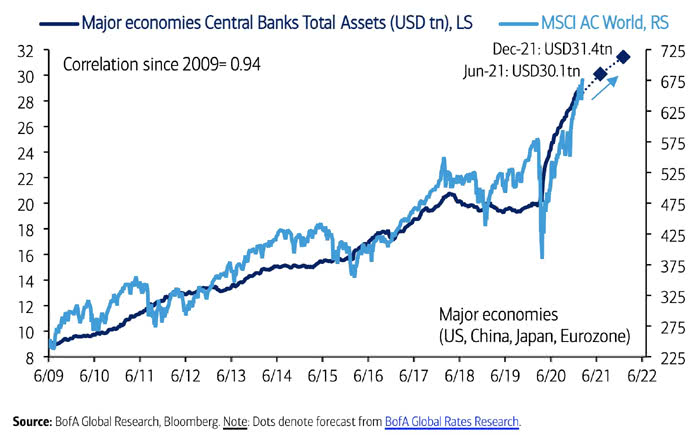 In this context, both Tesla and the cryptos are just instances of the leading age of the global financial asset bubble – congregating places where the most reckless of the punters swing for the fences. A few weeks back Tesla was an $800 billion instance of the bubble, while at its recent peak the crypto market was a $2.5 trillion variation of the same.

In these cases, the similarities tell an important story. Neither the cryptos nor Tesla are earning assets: They are just vehicles for unadulterated speculation and rise solely because the central bankers are enabling speculators to push the hunt for the last greater fool to the very thin edge of sanity.

Again, recall that until recently, Tesla which sold 500,000 vehicles last year had a larger market cap than the entire incumbent global auto industry, which sold about 65 million units. Yet Tesla has never made a dime manufacturing and selling its electric vehicles.

For instance, it recently reported first quarter 2021 net income of $438 million on 185,000 cars delivered. But that profit was based on $518 million of regulatory credit sales and a $101 million positive gain from its Bitcoin position and sales. Strip these out and……Tesla lost $181 million selling cars.

Stated differently, during the past quarter alone Tesla lost just under $1,000 per car sold!

For want of doubt, here is what Tesla has been padding its financials with: Namely, regulatory credits that are sold to, well, GM, Ford, Fiat Chrysler and the rest of Tesla’s regular-way auto competitors, who must pay tribute to the loud mouth from Silicon Valley in order to comply with clean energy standards. 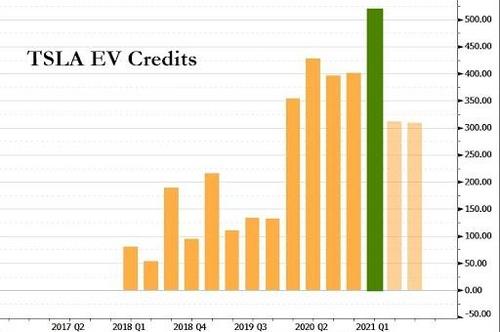 When you subtract the above government manufactured and soon to disappear “income”, here is what Tesla actually generated on the bottom line. Rather than its ballyhooed 7 consecutive quarters of positive net income, it has actually produced 10 straight quarters of red ink. 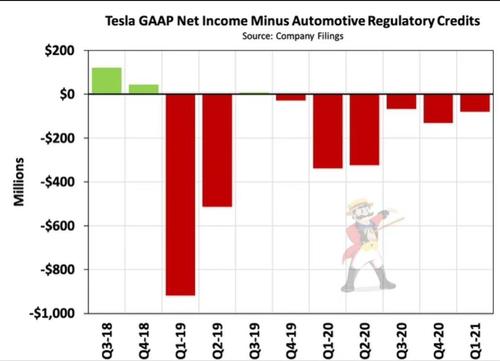 But here’s the thing. The world second richest man at a recent net worth of $170 billion is a Fiat-Baby if there ever was one. That’s because the above phony regulatory income will soon disappear entirely, as the incumbent car markers belatedly field their own EV fleet offerings and no long need to pay tribute to Elon.

That’s in part why Ford Motor Company has literally jumped the shark recently, announcing that it will spend $30 billion on electrifying up to 25% of its fleet by the end of the decade, including its monster selling F-trucks.

And, of course, that comes on top of the 200 or more EV models being brought to market by Volkswagen/Audi, BMW, Porsche, Mercedes, Toyota, GM and Fiat Chrysler. That is to say, Tesla’s regulatory credit income will vanish, even as excruciating price competition and tens of thousands of competitor showrooms – overflowing with competitive EV offer – drive Tesla’s car business deeper and terminally into the red.

To be sure, the Silicon Valley types like to blabber on about first mover advantage and Elon the great disrupter. But the automotive future is not about batteries, disrupters or first movers.

To the contrary, it’s about vast time-tested global supply chains, automotive engineering and design capabilities, precision volume-manufacturing of millions of cars per year with minimal scrappage and quality defects and far-flung channels of distribution and sales. And on those matters, Tesla has virtually nothing to offer at all.

Tesla is simply the retro idea that the electric car of the 1890s, not the internal combustion engine, was the right idea after all – a dubious proposition that may nevertheless be right if the green fascists get their way and make 275 million combustion engine vehicles now in America’s garages illegal.

But the idea Tesla will win if Americans are forced into EVs en masse is sheer hype, riding a speculative bubble that vastly exceeds anything which has come before. And the latter is exactly the same propellant beneath Musk’s beloved cryptos.

Someday, the block chain made prove to be a better venue for financial transactions than the existing banking machinery, and so be it.

Likewise, the blockchain technology may prove itself to be a digitized venue of commerce that is far more efficient, convenient and adaptable than today’s methods of selling art, recording deeds, trading baseball cards or minting collectible NFTs in ways that are yet scarcely imaginable.

But none of those possibilities have much to do with the crazy-ass speculation in today’s Cryptoverse. To remind, there are now more than one thousand wanna be monies that are nothing but wagering tokens valued as follows:

In totality, upwards of $2 trillion of crypto market cap now trades on exchanges which have sprouted like Topsy all around the planet.

So the truth is, what you have here, apparently, is easy peasy internet-based legalized gambling on a global scale, which for the moment is free from the boot heels of state gaming commissions and SEC nannies and cops alike. That is to say, the most freewheeling, rambunctious home imaginable for the tsunami of central bank liquidity that has been injected into the financial system with reckless abandon during, especially, the last 15 months.

For want of doubt, here is the market caps of the top 30 crypto currencies which are now tracked and reported in real time and which are crawling with homegamers wielding charts, slogans and visions of sugar plums dancing on their screens.

None of these “currencies” make anything, store anything or in 99% of the cases transact anything.

They are just plain old gambling chips with market caps that depend on greater fools and precious little more, and by the looks of things, the supply of the latter may be rapidly drying up.

Compared to just one month ago, market caps have changed as follows:

Market Cap As of Sunday April 25 Versus May 26:

In fact, many of these cryptos trade a substantial share of their market cap every 24 hours.

Then again, if you are a long-term investor looking all the way out to, say, 7-day horizons you could try shorting Terra, which is already down 34% in that span or going long Horizon (ZEN) which is up by 32% since last Tuesday, and, of course, there is always Dogecoin awaiting another tweet from Elon Musk signaling a turn to student body left (or right, as the case may be).

To be sure, we have no objection at all to free citizens betting on black at the roulette wheel, playing craps in the back alley or swinging for the fences in the crypto space.

But just recall what this is and isn’t. Foremostly, this is not gentlemanly stock market gambling where 75 years of nanny state policing by the SEC and prosecutors run wild at the DOJ have taken all the sharp practices out of the game.

Instead, the crypto exchanges are real wild-west free markets where every manner of manipulation ever known to speculative man have been revived and with malice aforethought.

So, yes, as the lambs soon find themselves in the slaughterhouse, they won’t know what hit them. But so what?

At least we might get a live fire demonstration of what booming and busting “markets” should look like when there are no cops around to gentrify the gambling.

And more importantly, we will find out that in a raging world of fiat, fiat is all there is – the wisdom of Elon Musk to the contrary notwithstanding.