In terms of readership and reader response, one of my most popular—if not most popular—contribution to LewRockwell.com was a piece I wrote, “The Black Hole in the Heart of Stephen Hawking,” in which I contrasted the celebrated Stephen Hawking’s work with the relatively unknown theories of Dr. Edward Henry Dowdye, who in effect although respecting Einstein, he as an engineer who “built” and created devices that work for NASA, as opposed to someone who conducted “thought experiments”—a concept I agree with Electrical Universe physicist Wallace Thornhill who described the expression as an oxymoron, and Einstein’s famous E=mc2 never defined what Energy, Mass, or Light is. In fact, physics defines energy as “the ability to do work,” which automatically excludes energy from many postal workers, DMV employees, politicians, hedge fund vulture capitalists—if the reader doesn’t mind my attempt at humor. More seriously, I recall an Electrical Universe supporting physicist observing, “We know what a force does. We don’t know what it is.”

However, Dr. Dowdye’s work (which I admit my limited understanding of fundamental elementary mathematics makes difficult to follow) Discourses & Mathematical Illustrations pertaining to Extinction Shift Principle 2nd Edition (from the description on Amazon.com) shows a more clear understanding of the universe than Einstein and his acolytes’ have: 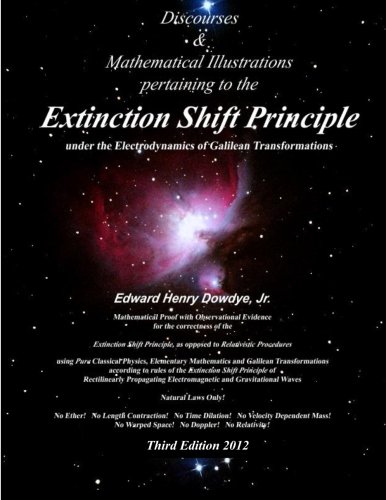 Dowdye is an emission theorist who first coined the principal axioms of his theory, the Extinction Shift Principle, successfully mapping correctly applications of Galilean Transformations of Velocities to problems dealing with both gravitation and electromagnetism in the frame work of Euclidean Space Geometry. Unlike other emission theories, the Extinction Shift Principle distinguishes that which can be measured from that which can only be calculated by a real-world physical observer. Dowdye demonstrated for the very first time pure classical solutions to the complete set of problems dealing with gravitation and electromagnetism in Euclidean Space, applying the very same principal axioms to the undisturbed, not measurable phenomena. The Extinction Shift Principle successfully led to the exact solutions to the very problems responsible for the success and fame of both General and Special Relativity. [Emphasis added.]

A easily comprehensible summary of his findings on his website is available at this link, “The Abbreviated Details ABSTRACT.” Why has the average person never heard the work of this brilliant black American, who was a devout Christian and if one does not give into “scientistic” prejudices and biases, was in my opinion the American Einstein, who saw far beyond him? As this Scientist Profile explains:

You are an American NASA scientist who studied physics in Germany and is fluent in German, and when you read Einstein’s work in the original works in his native tongue, you realize that Einstein’s intentions are different from what you read in English textbooks.

Dr. Dowdye points out that stars outside the corona of the sun in fact do not bend according to Einstein’s general relativity.

So what do you do? You come to this conclusion:

A fancy way of saying: “Einstein: your prediction of gravity bending light that made you world famous, is incorrect”.

Why doesn’t NASA know about these findings? To put it simply, no one wants to be the first to say Einstein’s theory as modern science interprets it is wrong. That would upset too many apple carts as Neal Adam would say.

I did send a link to my article to him, and Dr. Dowdye was most gracious and kind in his reply. I never had the pleasure of meeting him or listening to one of his lectures in person, and when I had a feeling something was wrong (when I reached out a while back via email and did not receive a reply), I was deeply saddened to learn only recently that he had died after a prolonged struggle with cancer last December.

On YouTube, the channel Sky Scholar has done a beautiful short video tribute by a man who knew him and worked with him.

His obituary is from the above that provided a link but on his biographical page on his website, in addition to his scientific credentials it concludes:

“Dr. Dowdye is active and involved in the spiritual as well as in the physical realm and is a member of Reid Temple A. M. E. Church in Glenn Dale, Maryland and is formerly a member of Florida Avenue Baptist Church located in Washington, DC, his city of birth.”

If I had any wish or prayer to request humbly of God, because I know Dr. Dowdye is in His loving Eternal Light even now, it would be that more black Americans were aware of this remarkable, kind, Christian (in the best sense of the word) man, and that his achievements and life be a source of comfort and strength and most of all inspiration (to them and all of us), showing the power of unity when people see past any “color” that is used to divide us, to see that we are all human beings alike in that we all have the potential to offer one another great love, and that we all feel joy and pain in living in this world, and that we might come together with a common love for the Lord’s magnificent creation, which only a great, good, pious soul like Dr. Dowdye was permitted to glimpse and explain part of God’s beautiful truth. I am sure even now he understands how much so many truly admired him; the world is poorer by his absence. Yet there is much rejoicing in Heaven.

God bless you, Dr. Dowdye, and your beloved family who have suffered such a terrible loss in your passing.

Hymn “Abide With Me” performed by Ella Fitzgerald

Previous article by Yvonne Lorenzo: The Unholy Sacrament of the Damned Vaccine