After 55 years of special privileges and special pleading for black Americans, where do we stand?  Integration has failed.  Black Americans, or more correctly, those who speak for them, want black-only towns, black-only college dorms, black-only dining halls, and a black national anthem.  Except for the black anthem, that’s what they had a half century ago prior to “affirmative action.”

How is it that when blacks demand segregation, it is not racism?

As Lawrence Stratton and I demonstrated in our book The New Color Line (1), racial quotas were strictly prohibited by the 1964 Civil Rights Act. Nevertheless, the law was stood upside down and quotas were imposed. As a result many young whites, especially males, had their careers foreclosed.  Less qualified people took their place in universities, in employment and in promotions.  New wrongs against whites were justified by white liberals as compensation for past wrongs against blacks. The sins of the fathers were visited upon the sons. 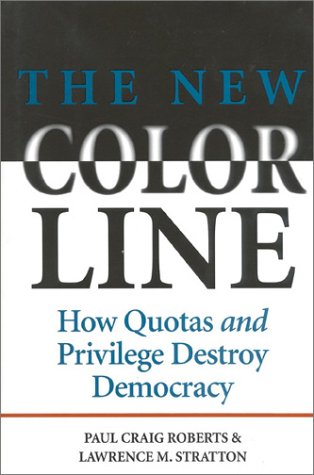 This is the New Justice.

The insouciance of white Americans makes it easy for them to be brainwashed and indoctrinated.  And they are.  So many of them have been imbued with guilt that white city governments are unable to protect white businesses from looting and arson.  The Democrat Party is so infused with white guilt that its response to rioting and looting is to defund the police.  Yet, according to the press prostitutes, the Biden/Kamala duo are leading the presidential race.  The Democrats know that Biden will be removed as medically unfit and Kamala, an anti-white racist, will become president if guilt-ridden Democrats win.

What will be the future of white America if Kamala is in the White House? This is something that all Americans need to comtemplate.

White Americans, being essentially an insouciant people, have no comprehension of how demonized white people are.  Of course, no one tells them, and they are too busy with their golf game, watching their college football team, and remodeling the kitchen to care.  Whiteness is so demonized that it is destroying science, “a white construct” and thereby racist. Physics itself has been declared to be “a mirror of colonial patterns and social inequalty” (2).

Even mathematics is now declared to be racist by white mathematicians themselves—the Mathematical Association of America.  Mathematics, the brainwashed mathematicians say, is polluted with racism.  Apparantly even 2+2=4 is a white racist construct.

Nonsense, you say.  If only.  You can read about it here, here and here.

Previous article by Paul Craig Roberts: Another Dumb White Liberal Feminist Makes a Fool of Herself

The 1619 Project: Down, But Far From OutHere’s Why You Should Start Getting Ready for Christmas Now