Although the draconian lockdowns punished the economy, a partial recovery occurred after governments allowed businesses to reopen. However, continued economic growth depends on the outcome of the presidential election. The crisis opened the door for a surge in regulations, subsidies, and other special interest privileges under the guise of promoting the “public health.”

This progressivism—a code word for cronyism—presents a serious threat to America.

As Murray Rothbard explains, the original Progressive Era witnessed corporate and safety regulations, environmental laws, welfare and labor compensation, and new taxes that benefited favored corporations, bureaucrats, academics, and labor activists at the expense of the taxpayer. If trends continue, modern politicians will pass similar policies to benefit themselves and favored supporters, crippling economic activity. To properly understand this progressivist threat, one must recognize the motives, background, and ideological orientation of the original progressives. They were mostly Yankees, the descendants of the Puritans who stayed in New England or emigrated to New York and the Midwest. They grew up in evangelical households that urged a remaking of society by coercively stamping out sin, particularly alcohol consumption. After earning PhDs in Germany, progressives preached their interventionism under the secularized guise of science and the public welfare. Furthermore, these social engineers supported eugenics, the science of controlling the labor supply to improve its overall quality. Lastly, progressives strove to revolutionize the world through foreign policy adventures.

In their struggle for economic privileges, progressives split into two groups. The corporatists championed protecting trusts and cartels from the vicissitudes of the free market. These big business advocates wanted to create trade commissions and other regulatory agencies to cripple competition and impose onerous compliance costs on small businesses. On the other hand, the socialists desired an overhaul of the capitalist system, blaring the trumpets for stringent antitrust regulation, radical labor laws, and redistributive taxes. President Woodrow Wilson embodied both strands, working with the two groups to enact the income tax, the Federal Reserve System, and the Federal Trade Commission.

In many ways, modern progressives are carbon copies. They congregate in New England and live in coastal New York City, Washington, DC, San Francisco, and Los Angeles. While eschewing traditional religion, modern progressives are zealots for egalitarianism and social justice. They attended the Ivy League and other elite American universities, empowering them with government-funded research. Although modern progressives disregard eugenics, they still advocate social engineering, championing egalitarianism for everybody except themselves while dictating what is morally acceptable. Finally, they are thoroughgoing foreign interventionists. Neoconservatism is actually a variant of progressivism, for as Angelo Codevilla explains, George W. Bush’s wars were “but an extrapolation of the sentiments of America’s progressive class, first articulated by people such as Princeton’s Woodrow Wilson.”

The progressive movement still splits along corporatist and socialist lines. The former support a cozy relationship with Wall Street and “Big Tech,” welcoming various internet and safety regulations that would hurt smaller businesses without the appropriate ecommerce infrastructure. The latter advocate radically anticapitalist measures, particularly the dismantling of Big Tech, the Green New Deal, a universal basic income, and wealth taxes. With the exception of hostile antitrust lawsuits, big business corporatists are not against these measures per se, provided they can acquire environmental subsidies and offload the cost of new entitlements and taxes onto the less wealthy (accomplished with the progressivist income tax and Social Security).

If Hillary Clinton and Joe Biden embody the corporatist mindset and Alexandria Ocasio-Cortez and Elizabeth Warren the socialist mentality, then surely Kamala Harris is the modern Wilsonian.

Big Tech has funded Harris in various California elections in exchange for favorable regulatory oversight. Many former personnel now work for the large companies: a senior counsel left in 2018 to lobby on behalf of Amazon, Harris’s first campaign manager works for Google, and her brother-in-law is the chief legal officer for Uber. 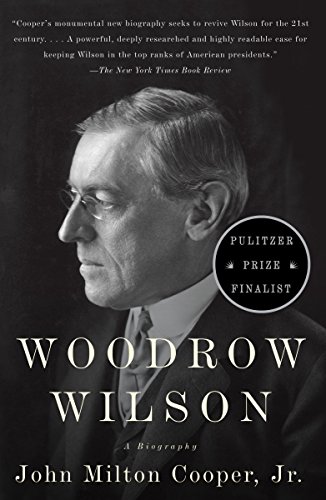 To pander to the socialists, Harris supports the profligate Green New Deal and a universal basic income, funded by new taxes that will “only” be levied on the wealthy. Harris exerts enormous influence over the extremely malleable (and increasingly senile) Biden, jubilantly telling Trevor Noah on The Daily Show that “as soon as we get him in the White House, and even before with these task forces that we had, we were able to significantly push Joe Biden to do things that he hadn’t signed on to before.”

Similar to the legislation of one hundred years ago, the new progressive juggernaut presents an incredible threat to the United States. Its policies will impoverish the public to enrich elite businesses, politicians, intellectuals, and unions. This future looks bleak, and it must be stopped.

[Adapted from “America 2021: The Threat of Progressivism,” a talk delivered on August 29 in Orlando, FL.]

Note: The views expressed on Mises.org are not necessarily those of the Mises Institu

Patrick is Assistant Professor of Economics at Florida Southern College. He completed his PhD in the Department of Economics at George Mason University. He is a 2018 Mises Institute Research Fellow.