What of Natural Rights?

I have written extensively on the necessity of natural law as the foundation for a society grounded in liberty.  What of natural rights?  How are the two related?

Murray Rothbard addresses this question in chapter four of his book, The Ethics of Liberty, pointing to John Locke:

From the Lockean emphasis on the individual as the unit of action, as the entity who thinks, feels, chooses, and acts, stemmed his conception of natural law in politics as establishing the natural rights of each individual.

It is this tradition of natural-rights libertarianism upon which the present volume attempts to build.

This distinction of natural law and natural rights has caused confusion for many – certainly me.  For example, how can Rothbard open the first three chapters of this book describing the necessity of natural law to liberty and then spend the bulk of the book focusing only on the libertarian analysis of property rights?  What of the “moral” stuff inherent in natural law?  That’s what I want to get at here.

To begin, while it is true (as Rothbard suggests) that many of the earlier scholars of natural law placed emphasis on the king or state as opposed to the individual, Locke was not the first to demonstrate a distinction between natural law and natural rights.  One could find this distinction in Aquinas (emphasis added):

Now human law is framed for a number of human beings, the majority of whom are not perfect in virtue. Wherefore human laws do not forbid all vices, from which the virtuous abstain, but only the more grievous vices, from which it is possible for the majority to abstain; and chiefly those that are to the hurt of others, without the prohibition of which human society could not be maintained: thus human law prohibits murder, theft and such like.

So, while natural law described how humans ought to act toward others (and, in my opinion, describes the type of behavior necessary if one is to expect any form of sustainable liberty on this earth), natural rights describe how others (society) ought to act toward the individual rights-holder.

For a simple example, natural law is grounded in other-regarding action – call it the Golden Rule for simplicity.  Yet I have no natural right to demand that others treat me in a loving manner – to feed me if hungry, to shelter me if homeless, or to clothe me if cold.

Natural law describes proper moral behavior – and, in my opinion, the behavior necessary if society is to sustain the natural rights in human law of life and property.

I do have a natural right to demand that others respect my property and my physical body: don’t hit first; don’t take my stuff.  And it is here where human law plays a role – as touched on by Aquinas, further developed in Locke, and expanded upon significantly by Rothbard. 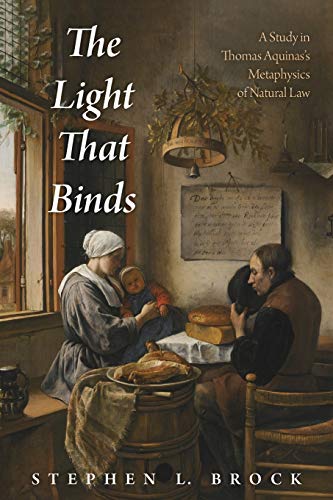 I find it quite interesting that one of the strong pushbacks against natural law is the idea that proponents of natural law wish to arrive at a theocracy.  Yet it is clear, as early as Aquinas, that this was never the purpose.

At the same time, society today is taking a bastardized version of natural law and turning this into natural rights through human law.  By law, others have a right to claim from me food if hungry, a home if without shelter, and clothes if cold.

Critics such as these are attacking a strawman, while the state is enacting exactly that which they fear – a theocracy, but based on a deformed concept of what it means to be a human being.

Previous article by Bionic Mosquito: The Evil of Militarism