The Campaign To Lie America Into World War II

Before Pearl Harbor, there was an elaborate British influence operation of forged documents, fake news, and manipulation.

By Hunter Derensis
The American Conservative

Seventy-eight years ago, on December 6, 1941, the United States was at peace with world. The next morning, local time, the Empire of Japan bombed the U.S. Navy base at Pearl Harbor, Hawaii. Four days later, Nazi Germany issued a declaration of war against the United States. The American people were now unalterably involved in a global conflict that would take the lives of over 400,000 of their native sons.

But before Japan opened this door to war, the United States had been the target of an elaborate, covert influence campaign meant to push public opinion, by hook or by crook, into supporting intervention on the side of the British. Conducted by the United Kingdom’s MI6 intelligence service, it involved sometimes witting (and often unwitting) collaboration with the highest echelons of the U.S. government and media establishment.

In the early summer of 1940, British Prime Minister Winston Churchill dispatched intelligence agent William Stephenson to North America to establish the innocuous-sounding British Security Coordination (BSC). The Canadian-born Stephenson was a World War I flying ace and wealthy industrialist who had been a close Churchill confidant for several years. Adopting the codename “Intrepid” during his operations, spymaster Stephenson served as the main inspiration for James Bond (whose creator, Ian Fleming, worked with the BSC). 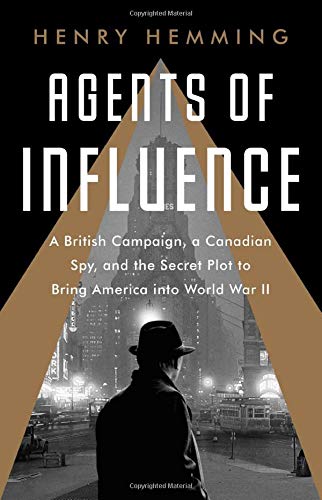 The BSC’s base of operations was the 35th floor of Rockefeller Center in New York City, which it occupied rent-free. The influence campaign began in April 1941, employing hundreds of agents, including well-placed individuals in front groups, the government, and polling organizations.

Intrepid had his work cut out for him.

Entering 1941, upwards of 80 percent of Americans opposed U.S. intervention in the war in Europe, a sentiment expressed through the America First Committee. Founded in September 1940 by a group of Yale students (including Gerald Ford, Sargent Shriver, and future Supreme Court justice Potter Stewart), at its peak the organization had 800,000 dues paying members and 450 local chapters spread across the country.

“The America First Committee was taking the position that we should not be involved in foreign wars, as we were in World War I,” John V. Denson, a distinguished scholar at the Ludwig von Mises Institute and former circuit judge in Alabama, told The American Conservative. “There was a great deal of criticism of [Woodrow] Wilson taking us into World War I, so there was strong sentiment that we were tricked into that war and therefore that we needed to stay out of European wars. That was the America First position. We didn’t want England or anyone else dragging us into another war.”

This meant that a primary goal of the BSC was to disparage and harass those Americans opposed to entering World War II. But it couldn’t do this in the open. The Fight for Freedom Committee was (like the BSC) established in April 1941 and also headquartered at Rockefeller Center. There it announced that the United States ought to accept “the fact that we are at war, whether declared or undeclared.”

In September 1941, when North Dakota Senator Gerald Nye, an anti-interventionist and scourge of the armaments industry, gave a speech in Boston, Fight for Freedom demonstrators booed and heckled him while handing out 25,000 pamphlets labeling him an “appeaser and Nazi-lover.” Similarly, when New York Congressman Hamilton Fish III, an irritable thorn in Franklin Roosevelt’s side, held a rally in Milwaukee, a Fight for Freedom member interrupted his speech to hand him a placard: “Der Fuhrer thanks you for your loyalty.” Reporters, alerted ahead of time, made sure photos of the scene were reprinted nationwide.

When Charles Lindbergh, the aviator and the America First Committee’s most popular speaker, addressed a rally at Madison Square Garden in October 1941, Fight for Freedom attempted to sow confusion by printing duplicate tickets. Lindbergh still successfully spoke to over 20,000 supporters, not including an agent provocateur who tried to cause a stir by yelling, “Hang Roosevelt!” (In actuality, it would be Lindbergh’s infamous September 11 remarks in Des Moines that would do more to damage the non-interventionist cause than any of the BSC-orchestrated hijinks.)

A 1945 study by BSC historians described their efforts: “Personalities were discredited, their unsavory pasts were dug up, their utterances were printed and reprinted…. Little by little, a sense of guilt crept through the cities and across the states. The campaign took hold.”

The Saudi-US Partnership: Evil Begets Evil How To Avoid Civil War: With Decentralization, Nullification, and Secession