Deep Solar Minimum on the Verge of an Historic Milestone

By Paul Dorian
Watts Up With That?

*Deep solar minimum on the verge of an historic milestone*

The sun is currently in the midst of a deep solar minimum and it is about to reach an historic milestone. So far this year the sun has been blank (i.e., no visible sunspots) for 266 days and, barring any major surprises, it’ll reach 269 days early next week which will be the quietest year in terms of sunspots since 1913 when the sun was spotless for 311 days. In fact, the current stretch of consecutive spotless days has reached 29 and for the year the sun has been blank 77% of the time. The current record-holder in the satellite era for spotless days in a given year is 2008 when the sun was blank for 268 days making the 2008-2009 solar minimum the deepest since 1913.

Solar minimum is a normal part of the 11-year sunspot cycle, but the last one and the current one have been far deeper than most. One of the consequences of a solar minimum is a reduction of solar storms and another is the intensification of cosmic rays. The just ended solar cycle 24 turned out to be one of the weakest in more than a century – continuing a weakening trend that began in the 1980’s – and, if the latest forecasts are correct, the next solar cycle will be the weakest in more than 200 years. 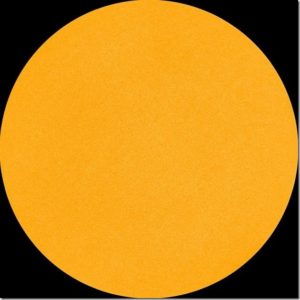 remains spotless today and has been so 77% of the time in 2019; image courtesy NASA SDO/HMI, spaceweather.com

Solar minimum and the intensification of cosmic rays