In essence, this article is about a map, a video, a timeline, and a chart.  Please, take a few minutes to carefully examine each.

I have asked dozens, if not hundreds, of Americans to please tell me why, exactly, America is at war with Afghanistan, the longest war in American history.  Some say, “Because they attacked us.”  Most have no answer, whatsoever, but instead ask me, “Why?”   I respond by asking them what large oil-producing nation borders Afghanistan in the west.  Some guess, “Iraq.”  Nobody knows.  I then ask what large oil-consuming nation borders Afghanistan on the East.  Nobody knows.  I tell them the answers are Iran (Israel’s and Saudi Arabia’s arch enemy) and China.

0 miles: Distance from Afghanistan to Iran

0 miles: Distance from Afghanistan to China

Said a different way, the USA invaded and occupies a nation on the other side of the planet that fucking borders Iran and China, then complains about Persian and Chinese aggressive behavior in the Persian Gulf and South China Sea.

It is highly unlikely that you have seen the interviews in this 4 minute and 13 second video, a compilation of FDNY firefighters talking about the explosions inside the WTC on 9-11-2001.  Watch it now, before it is memory holed by The Ministry of Truth.

On September 7, 2019, President Trump revealed in a series of tweets that he had invited “major Taliban leaders” and Afghan President Ashraf Ghani to meet with him separately at Camp David on the following day. He wrote that, because a Taliban attack killed several people, including a U.S. soldier, in Kabul on September 5, he had “immediately cancelled the meeting and called off peace negotiations.” 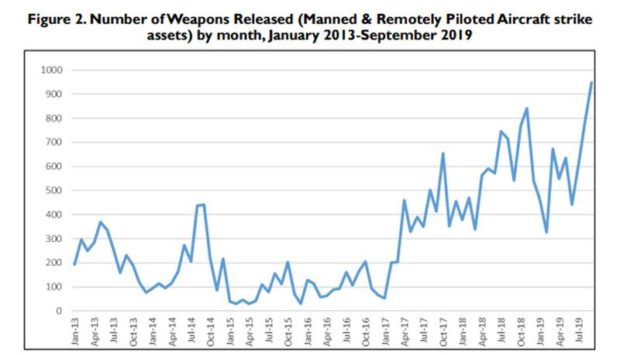 U.S. air operations have escalated considerably under the Trump Administration, as measured by the number of munitions released (see Figure 2). These operations have contributed to a sharp rise in civilian casualties; the U.N. reported that the third quarter of 2019 saw the highest quarterly civilian casualty toll since tracking began in 2009, with over 4,300 civilians killed or injured from July 1 to September 30.

Oceania is at war with Central Asia.

Oceania has always been at war with Central Asia.

Oceania will always be at war with Central Asia.