Just when you think the Donald has lost his marbles completely, he pulls a rabbit of rationality out of the hat of Imperial Washington’s Forever Wars madness.

We are referring, of course, to his sensible decision to decline the opportunity to put American soldiers in harms’ way in an impending showdown between Turks and Kurds on the northern border of Syria. To our recollection, that particular tribal enmity has been going on for centuries and needs no help from Washington to fester on for years to come.

But already he is being monkey-hammered by the bipartisan War Party because by standing down and removing US forces from the contested towns along the border Trump is basically sounding the death knell for the neocons’ failed, bloody, illegal and demented regime change project in Syria.

Now – and very soon – the Kurds will have to make a deal with Assad and his Russian and Iranian allies to counter Turkey’s incursion, including the creation of a “safe zone” along the Turkish border that would be off-limits to armed Kurdish forces.

Here in the map below is the narrow strip (shaded red) of historic Kurdistan that hugs close to the northern and northeastern Syrian/Turkey border. There is absolutely nothing that implicates America’s homeland security in what happens in these inconsequential towns and villages.

Indeed, the Donald found himself uncomfortably squeezed between two alleged allies only because they had been allies of convenience in a Washington conducted regime change war against Assad that never should have happened in the first place.

In essence, Washington armed and trained a Kurdish militia to turn-back the pestilence of the ISIS caliphate which had overrun their historic towns and territories, terrorizing their populations with its demented form of Sunni jihadism.

But where did the short-lived caliphate come from if not out of the wreckage of western Sunni-dominated Iraq left by Washington’s destruction of the Iraqi state? So doing, Washington opened the gates of hell by shitcaning the fraught but workable modus vivendi that Saddam Hussein had stitched together between Sunni, Shiite and Kurds with a brutal sword and the bountiful spoils of Iraq huge oil production.

Moreover, where did the ragtag army of the ISIS caliphate get the means to terrorize and occupy large swaths of the dusty towns of northern Syria east of he Euphrates?

Why from the massive stores of tanks, artillery, military vehicles, guns and ammo left behind by the US Army when it vacated Anbar province and Mosul; and which lethal capacities were augmented by Washington’s massive CIA-supplied weapons flow to the so-called moderate rebels, who more often than not sold them to ISIS or left them behind as they retreated from the battlefield.

In short, the radical leftwing Kurdish YPG and its military adjuncts, including the Marxist-terrorist International Freedom Battalion, became Washington’s ally. But this gambit of strange bedfellow opportunism arose only after Washington had unleashed upon these historic Kurdish communities a plague that never would have existed save for the neocon regime change projects first in Iraq and then in Syria.

Needless to say, one stupidity in the regime change business always generates a train of more. In this case, Turkey pursued its historic quarrels with the Assad family by permitting its territory to be used as a supply line, training and basing camp for the Free Syrian Army, which was also sponsored, trained and armed by Washington. 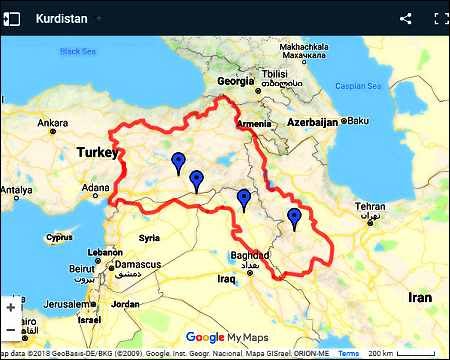 Needless to say, in this ethnically and religiously complex corner of the Middle East, the Arab-Sunni Free Syrian Army (FSA) and the Kurd-Sunni Syrian Democratic Forces (SDF) were on the same side – but only in the sense that all of them had their hands out deep and wide for Washington’s largesse, weapons and sponsorship.

In fact, however, Turkey always saw the FSA as an instrument to contain the SDF, as much as it was ostensibly a fighting force against ISIS. That’s because a Kurdish military armed and trained by Washington’s finest is about the worst nightmare that the Turkish nationalists in Ankara could have possible imagined.

One of the enduring frictions in that woebegone neighborhood of the world is the 30 million strong nation of Kurdistan which doesn’t have a state, but is spread among Turkey (12 million), Iran (6 million), Iraq (6 million) and a small sliver of population (2 million)and territory in northeastern Syria.

Unfortunately, the Kurds were one of the few supplicants at Versailles in 1919 which didn’t get their own state because the colonialist policies of France and England preferred the territorial demarcations and respective spheres of influence which resulted in the artificial states of Lebanon, Syria and Iraq.

Consequently, the Kurdish populations of the states circled in red on the map below have been frequently aggrieved owing to their minority status; and have been a latent force of separatism, and sometimes armed insurrection, especially in Turkey where ancient enmities pre-date the arrival of Columbus in America.

The only thing that can really be said about the now multi-decade long hostilities between the government of Turkey and the forces of Kurdish separatism resident in its minority population is that America has no dog in that hunt whatsoever.

We don’t care which side is right. That is, whether the Erdogan is a brutal tyrant or the organized Kurdish rebels are terrorists, as Ankara insists.

But its damn obvious that when Washington armed and trained the incipient Kurdish militias of northern Syria as proxies and mercenaries to do the dying and bleeding against the ISIS monster it had actually birthed – that is was only a matter of time before Turkey moved to lower the boom, as it is now doing.
Image result for Map of greater Kurdistan

Needless to say, the War Party is shrieking loudly about Trump’s purported betrayal of an “ally”, but that’s the very essence of why Washington is stuck to its Forever Wars like some kind of political/military tar-baby.

The rightwing neocon Republicans are the worst of the lot because they have come to embrace the radical leftwing Kurdish YPG not because it had anything at all to do with America’s national security or because of shared political values or ideology.

To the contrary, the Syrian Kurds were available to help contain the ISIS cancer Washington created and to undermine the Assad regime in their grand plan for regime change and partition of the county per the goals of Bibi Netanyahu and his gang of neocon hardliners.

Thus, Senator Lindsay Graham, the worst among the worst of the Imperial City’s armchair proconsuls, wasted no time arguing for still more pointless war in Syria:

“We can’t abandon the Kurds now. We can’t turn it over to Turkey. To think that will work is really delusional and dangerous,” said co-sponsor Sen. Lindsey Graham (R., S.C.), a close ally of the president but a fierce critic of his Syria decision. “Pray for the Kurds,” he said on Fox News.

At that the Donald retorted in a manner that says it all:

Mr. Trump responded to Mr. Graham’s criticisms later in the day, saying: “Lindsey would like to stay there for the next 200 years and maybe add a couple hundred thousand people.”

Indeed, as Turkey launched its attack on Kurdish militia positions on Wednesday, Trump aligned himself with non-interventionists and the sliver of antiwar voices in the Republican Party lead by Senator Rand Paul.

“This morning, Turkey, a NATO member, invaded Syria. The United States does not endorse this attack and has made it clear to Turkey that this operation is a bad idea,” Trump said in a statement.

He added: “There are no American soldiers in the area. From the first day I entered the political arena, I made it clear that I did not want to fight these endless, senseless wars – especially those that don’t benefit the United States.”

So this week witnessed the Donald’s finest hour on the twitter keyboard. In one spree of tweeted expostulation, he essentially eviscerated the very predicates of Empire to which official Washington is so hopelessly and destructively enslaved.

We are getting out of Syria, Trump insisted, and possibly this time he means it because he has not entirely forgotten his campaign promises or why he was elected by a national weary of Forever Wars. His Twitter string is worth quoting in full – not the least because he says very clearly that an ancient quarrel between the Turks and the Kurds has no bearing whatsoever on homeland security in America.

That particular assertion, the bipartisan handmaids of the Imperial City could not abide because the godforsaken border towns on the Turkish frontier are merely a microcosm of most of what Imperial Washington busies itself with. To wit, other peoples quarrels that threaten neither the peace of the planet or the liberty and safety of Americans domiciled securely between the great ocean moats.

The United States was supposed to be in Syria for 30 days, that was many years ago. We stayed and got deeper and deeper into battle with no aim in sight. When I arrived in Washington, ISIS was running rampant in the area. We quickly defeated 100% of the ISIS Caliphate.

…… The Kurds fought with us, but were paid massive amounts of money and equipment to do so. They have been fighting Turkey for decades. I held off this fight for….

….almost 3 years, but it is time for us to get out of these ridiculous Endless Wars, many of them tribal, and bring our soldiers home. WE WILL FIGHT WHERE IT IS TO OUR BENEFIT, AND ONLY FIGHT TO WIN. Turkey, Europe, Syria, Iran, Iraq, Russia and the Kurds will now have to…..figure the situation out, and what they want to do with the captured ISIS fighters in their “neighborhood.” They all hate ISIS, have been enemies for years. We are 7000 miles away and will crush ISIS again if they come anywhere near us!

I was elected on getting out of these ridiculous endless wars, where our great Military functions as a policing operation to the benefit of people who don’t even like the USA. The two most unhappy countries at this move are Russia & China, because they love seeing us bogged down, watching over a quagmire, & spending big dollars to do so. When I took over, our Military was totally depleted. Now it is stronger than ever before. The endless and ridiculous wars are ENDING! We will be focused on the big picture, knowing we can always go back & BLAST!

Previous article by David Stockman: Cyclical Old Age Does Not Become Her