A Turning Point in the Bond Market?

We’ve recently seen a lot of coverage and even more “expert analyses” on the state of the bond market, to the extent that the average investor, or the average citizen for that matter, is likely to be overwhelmed and very confused about what it all means. Experts from the institutional side and defenders of the current monetary direction argue that it is all the result of policy choices, that’s it’s all under control and that we really shouldn’t worry about the extreme phenomena and distortions we now see in the debt markets. However, it hardly takes an economist or a monetary policy expert to spot the many faults of this position.

To strike at the core of this issue, we only need to examine a very basic question: Would you lend me $100 and agree to receive $90 in return? Somehow, I doubt I’d find many takers for this deal, yet when it comes to the bond market, this is where we are. As of the end of last month, 30% of all investment-grade bonds, amounting to over $17 trillion, have negative yields, meaning that buy-and-hold investors are guaranteed to make a loss.

And then there’s another simple thought experiment: Given the fact that there’s an opportunity cost to consider, inflation and that there’s always a risk of default in any loan, would you demand a higher interest to lend someone money for a week or for 30 years? While most rational people would naturally expect to be compensated more for a longer-term loan, the market has turned this notion on its head. In August we saw exactly that, short-term bonds paying more than long-term bonds, in what financial publications called the “inverted yield curve”, a phenomenon we haven’t seen since the beginning of the last recession. While mainstream commentators were quick to dismiss the importance of this move, conservative investors and experienced market observers sounded the alarm, especially as they pointed out the historic correlation between the inversion and the start of a recession. In fact, the inversion has preceded every single recession in the past 50 years, with only one false signal. 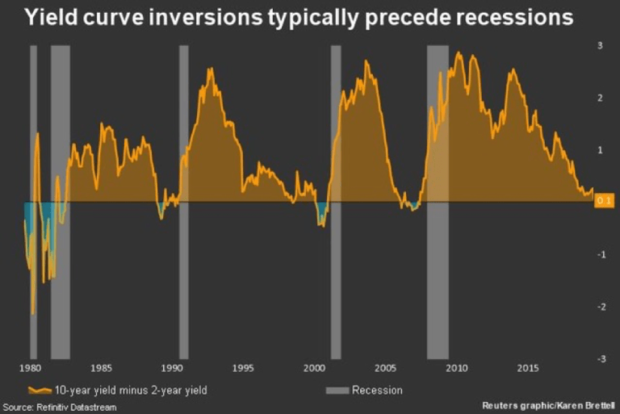 More recently we also saw flashing warning signs from a sudden spike in repo rates. The $1 trillion repo market allows banks to lend money to each other overnight and rates usually range around 1.5% – 2.25%. In late September, a liquidity crunch forced rates much higher, while some repo rates exploded to almost 10%. This pushed the federal funds rate higher, shooting past the upper limit of the Fed’s own target range, raising serious questions about whether the central bank is actually losing control of its monetary policy. This anomaly was strongly reminiscent of the 2007 housing market crash, when repo markets also suddenly tightened right before the crash, while it also provided a clear indicator that there aren’t enough reserves in the financial system for repo markets to function at the Fed’s target levels. This shortage of cash forced the Fed to intervene and provide the missing liquidity, by injecting $105 billion into the system.

Of course, Fed officials laughed off concerns over a serious systemic problem and explained away the spike as a result of a rare set of circumstances and a “one-off” event. And yet, at the same time, the central bank announced at least two more weeks of overnight cash injections, each adding $75 billion into the market, “to help maintain the federal funds rate within the target range”, as the official statement put it. And that could only be the beginning, as after the end of this period, the Open Market Trading Desk “will conduct operations as necessary to help maintain the federal funds rate in the target range, the amounts and timing of which have not yet been determined”. As the Bank of America accurately described the implications of this move, “For all intents and purposes, this will be equivalent to QE, with scheduled purchases of securities. We estimate that over the first year, the Fed would need to buy roughly $400bn of Treasury securities to achieve an appropriate level of reserves, plus a buffer”.

While the present conditions in debt markets might seem paradoxical to most reasonable people, the massive distortions that have resulted from the decades of monetary manipulation don’t stop there. Reckless policies like NIRP and ZIRP that central bankers are now doubling down on having interfered with organic market mechanisms for so long and so extensively that accurate valuation and normal price-finding functions have become almost entirely perverted. As the accumulation of debt is systematically encouraged, as prudent financial planning and saving are consistently penalized and as recession fears continue to steadily climb, safety is nowhere to be found in financial markets. Prices of traditional supposed ‘risk-free’ assets like sovereign bonds have risen to such extremes that many ensure a loss for those who buy them and negative yields are now becoming the norm, not the exception.

Decades of monetary manipulations, the now obvious global economic slowdown and this massive flight to safety have created such extraordinary conditions in debt markets that effectively invalidate one of the oldest and most widespread criticisms against precious metals. “Gold has no yield!”, mainstream commentators would so often respond when asked about safe havens. Well, it’s true, it doesn’t. But at least it doesn’t guarantee you a loss either, and during these absurd times, this is increasingly looking like a solid competitive advantage.

Institutional investors seem to agree, as many have had enough of the premiums they have to pay for the privilege of buying government debt. Inflows into gold-backed ETFs, vehicles widely used by institutional investors to gain gold exposure, recorded their third straight monthly increase and topped 100 tons in August, the highest point since February 2013. Naturally, while this shift represents a clear confirmation of the climbing demand and interest in gold, conservative and responsible individual investors clearly recognize the benefits of holding physical precious metals, over trading paper gold. And so do central banks for that matter, as they continue their gold buying spree unabated and keep adding to their reserves. Despite the recent surge in the gold price, near a six-year high, Russia and China are undeterred in increasing their gold holdings.

Overall, despite the repeated assurances of politicians and central bankers that everything is fine with the economy and that there’s no reason to worry, the market dynamics, and their own actions, paint a very different picture. And as more and more investors become disillusioned with government debt, recognize the unsustainability of the debt markets and seek out a real safe haven, the case for gold is further strengthened.

Previous article by Claudio Grass: In Defense of Switzerland