Last week, media outlets reported the existence of a whistleblower complaint filed with the inspector general of the intelligence community against President Donald Trump. The IC encompasses all civilian and military employees and contractors who work for the federal government gathering domestic and foreign intelligence.

The inspector general — a position appointed by the president and confirmed by the Senate — exists in all parts of the executive branch of the government, except for the White House, to examine and determine if officials are following the law.

In the case of the IC, since the subject of a whistleblower complaint can be so serious — often involving classified materials that affect national security — the rules provide for an immediate review of the complaint.

The complaint against Trump alleged that he offered a “promise” to a foreign head of state that was unlawful or threatening to national security. The IC inspector general — a Trump appointee — evaluated the complaint, interviewed the whistleblower, examined documents that the whistleblower provided and concluded that the complaint was “urgent and credible.”

The complaint related that Trump held up the sale of $250 million worth of military equipment and the delivery of $140 million in congressionally mandated foreign aid until the government of Ukraine opened a criminal investigation against the son of former Vice President Joe Biden, the leading Democratic contender to oppose Trump in the 2020 presidential election.

Can the president of the United States legally ask a foreign government to provide assistance to his reelection? In a word: No.

After special counsel Robert Mueller delivered his report of the relationship between the Trump campaign and Russian agents to the Department of Justice, and then testified about what he discovered, Trump claimed exoneration. Mueller’s report found some evidence of a conspiracy — 127 telephone calls and numerous meetings — between Trump’s campaign and Russian agents, but not enough to charge the crime of conspiracy to solicit foreign assistance in a domestic political campaign.

Mueller also found 10 instances in which Trump had committed the criminal offense of obstruction of justice by his personal efforts to derail the Mueller investigation. Mueller did not seek an indictment of Trump for behavior that would have gotten any other person in America indicted because Mueller knew that his boss, Attorney General William Barr, who needed to sign off on such an indictment, would not do so.

Trump felt exonerated and emboldened. At the same time that the country was debating publicly what the Mueller report revealed about his behavior, the president instructed the Treasury Department to hold off on the licenses it had provisionally granted to American arms manufacturers to sell a quarter of a billion dollars in arms to Ukraine. He also instructed the State Department to hold off on the delivery of $140 million in direct aid to Ukraine that Congress told him to deliver.

Also at the same time, he began his conversations with his Ukrainian counterpart, during which he urged a criminal investigation of the younger Biden, even though Biden’s commercial activities in Ukraine while his father was vice president have produced no credible evidence of criminal behavior.

Yet, as if to flaunt the Mueller findings, Trump apparently personally and directly committed the crime for which he claimed Mueller exonerated him.

What was that crime? It was the attempt to solicit foreign assistance for his campaign. It was the manipulation of American foreign and military policy for a corrupt purpose. A corrupt purpose puts the president personally above the needs of the nation.

In short, the whistleblower alleges that Trump offered a bribe to his Ukrainian counterpart: Go after my likely opponent’s son and you will get the $390 million in goods and cash that we are holding up.

If demonstrable, this behavior is far worse than anything alleged or uncovered by Mueller. The acts of obstruction that Mueller found arguably constitute impeachable offenses. That’s because the constitutional language of “high crimes and misdemeanors” as one of the three bases for impeachment has been found by the House of Representatives, in three different generations, to include obstruction. Yet there is still wiggle room as to how much personal presidential obstruction and underlying criminality is needed to constitute an impeachable offense.

There is no such wiggle room for bribery. The Constitution is quite clear that “treason, bribery, or other high crimes and misdemeanors” shall constitute a basis for impeachment. 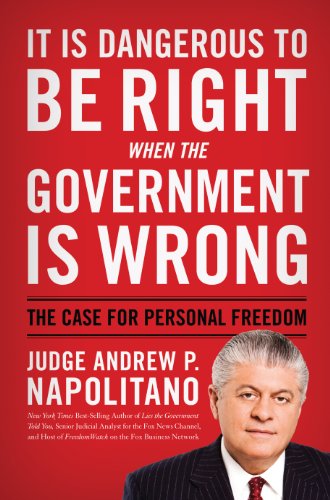 It Is Dangerous to Be ... Andrew P. Napolitano Check Amazon for Pricing.

Was Trump offering to bribe the Ukrainian president? The circumstantial evidence is: Yes. The transcript of Trump’s critical conversation with the Ukrainian president shows he asked his counterpart to coordinate with American authorities to prosecute the son of his likely political opponent in 2020. That is the solicitation of something of value from a foreign government — a felony.

Within a week of that conversation, Trump put his hold on the $390 million in aid. That’s when the Ukrainian president got the message.

Where does this leave us? We are at the precipice of a constitutional crisis. We have a president whose apparent corruption is palpable. We have a Constitution that prescribes a remedy. We have an attorney general who acts as if he were the president’s personal lawyer. We have Republicans in Congress who see and hear no evil from this president. And we have congressional Democrats hesitant to do their constitutional duty.

We have a mess.

The Assassination of JFK: Who was the ‘Mastermind’ — Johnson or Dulles?Strikes and Picket Lines in a Free Society